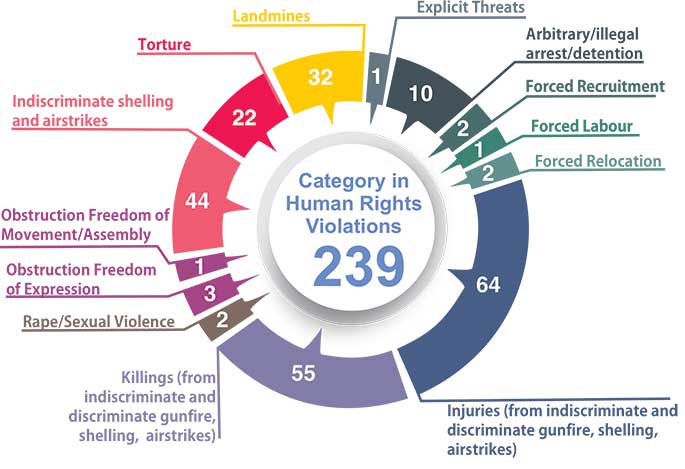 ND-BURMA: A Significant and Substantial Increase in Documented Human Rights Violations in the First Six Months of 2019

As the conflict escalated in Rakhine State and continued in the north and northeast of Burma, from January to June 2019, ND-Burma and its member organisations documented a substantial and significant increase in the number of human rights violations—a 360% increase over the entire 2018 reporting period in only 6 months. This disturbing increase was, contrary to ND-Burma’s previous report, largely the consequence of the intensification of the conflict in Rakhine (and Chin) State, which saw large numbers of skirmishes between the Arakan Army (AA) and Burma Army, as well as the latter’s use of indiscriminate gunfire, shelling and airstrikes. Out of the 156 armed clashes documented throughout Burma from January to June 2019, 98 were between the AA and the Tatmadaw.

Despite the military’s declaration of a unilateral ceasefire in the north and northeast of the country, the Burma Army still engaged in a number of armed skirmishes with Ethnic Armed Organisations (EAOs) in Kachin and northern Shan states. Moreover, conflict among EAOs, particularly in northern Shan State, was also documented by ND-Burma member organisations.

Due to the intense fighting between the military and EAOs over the reporting period and the large number of those occurring in Rakhine State, there was a significant number of conflict-related human rights violations perpetrated against civilians. The majority were committed by government security forces and involved the use of indiscriminate gunfire, shelling and airstrikes which often led to injuries and civilian deaths. Conflict and military operations near villager settlements also led to the displacement of approximately more than 27,000 villagers in the first six months of 2019, and many IDPs are still unsure when it will be safe to return.

Ethnic armed organisations also committed human rights violations against civilians during the reporting period. This included arbitrary arrest and detention, forced recruitment, inhumane and degrading treatment, extrajudicial killings as well as injuries and displacement due to the presence of conflict nearby and/or in civilian settlements. In particular, EAOs have been reported to arbitrarily detain villagers, or even entire villages, who are suspected of having ties with other EAOs, while subjecting them to torture and forced disappearances.

As always, civilians are the ones who bear the brunt of conflict. Communities, especially ethnic populations in conflict areas, have suffered significantly over Burma’s 70 years of civil war. When Burma is restored to genuine peace, civilian populations living in conflict-affected areas will be relieved of the burden of war. Therefore, the government and military must explore ways to achieve genuine peace with EAOs, including announcing a nationwide ceasefire and implementing realistic and all-inclusive peace negotiations with EAOs and CSOs monitoring the conflict and human rights situation. In addition, humanitarian groups and communities unfairly impacted by injustices against the backdrop of negotiations must be allowed to participate in every stage of the peace process.

ND-Burma’s documentation shows that there was a substantial increase in human rights violations during the first 6 months of 2019, largely due to the Burma Army’s use of indiscriminate gunfire, shelling and airstrikes near civilian settlements, and particularly in Rakhine and Shan states. As always, civilians in conflict zones in Burma continued to bear the brunt of the conflict and were subject to numerous human rights violations by both government security forces and EAOs. Now, more than ever, an urgent end to armed conflict and a government-sponsored reparations programme are essential to address both the impact of human rights violations and to end impunity for such abuses.

ND-Burma is a network that consists of 13-member organisations who represent a range of ethnic nationalities, women and former political prisoners. ND-Burma member organisations have been documenting human rights abuses and fighting for justice for victims since 2004. The network consists of six Full Members and Seven Affiliate Members as follows: 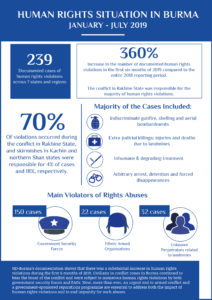