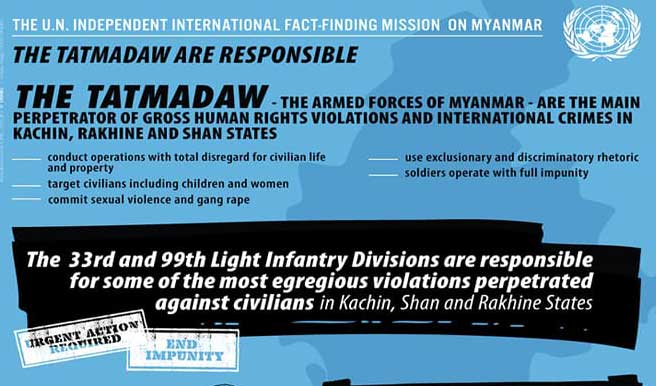 GENEVA (18 September 2018) – The Independent International Fact-Finding Mission on Myanmar on Tuesday released the full 440-page account of the findings of its 15-month examination of the situation in three states in Myanmar. The report also makes dozens of recommendations, including to the United Nations and the international community and to the Government of Myanmar. It reiterates the Fact-Finding Mission’s call for the investigation and prosecution of Myanmar’s Commander-in-Chief, Senior General Min Aung Hlaing, and his top military leaders for genocide, crimes against humanity and war crimes.

“Peace will not be achieved while the Tatmadaw remains above the law,” Marzuki Darusman, chair of the Fact-Finding Mission stated. “The Tatmadaw is the greatest impediment to Myanmar’s development as a modern democratic nation. The Commander-in-Chief of the Tatmadaw, Min Aung Hlaing, and all the current leadership must be replaced, and a complete restructuring must be undertaken to place the Tatmadaw under full civilian control. Myanmar’s democratic transition depends on it.”

Following the release of its 20-page report to the Human Rights Council of its main findings on 27 August 2018, the Mission has now released its full report, unprecedented in its scope. The full report establishes the clear patterns of violations by the Myanmar military, known as the Tatmadaw, across the country, and the legal analysis on which the recommendations are based.

The three members of the Fact-Finding Mission will present their report to the UN Human Rights Council on Tuesday morning.

Drawing on 875 detailed interviews conducted in locations in five countries, the report illustrates, in graphic detail, the violent modus operandi that is the hallmark of Tatmadaw operations against its own people.  The Mission was struck by how similar the Tatmadaw operations and conduct were in all three States.

“During their operations the Tatmadaw has systematically targeted civilians, including women and children, committed sexual violence, voiced and promoted exclusionary and discriminatory rhetoric against minorities, and established a climate of impunity for its soldiers,” said Marzuki Darusman. “The full findings we are releasing today show why, in our report to the Human Rights Council, we insist that the perpetrators of the gross human rights violations and international crimes, committed in Rakhine, Kachin and Shan States must not go unpunished. They also show why the top generals should be investigated and prosecuted for genocide in Rakhine State. I have never been confronted by crimes as horrendous and on such a scale as these.”

The report sets out in extensive detail its findings on the extreme violence perpetrated against the Rohingya in Rakhine State since 25 August 2017, in what the Tatmadaw referred to as ‘clearance operations’. It documents in unsparing detail how the Tatmadaw took the lead in killing thousands of Rohingya civilians, as well as forced disappearances, mass gang rape and the burning of hundreds of villages.

Through first-hand testimony from hundreds of victims and witnesses, the report provides harrowing details of some of the most serious mass-killings that took place during the ‘clearance operations’. These operations – including those in Min Gyi (known in Rohingya as Tula Toli), Chut Pyin and Maung Nu – involved planned and deliberately executed mass killing in which “dozens and, in some cases hundreds of men, women and children were killed”, the report says.

The report also details how the Tatmadaw perpetrated similar patterns of violations in numerous other villages. The Mission has corroborated Tatmadaw ‘clearance-operations’ in a total of 54 locations, and received first-hand accounts of additional operations in a further 22 locations.

“The horrors inflicted on Rohingya men, women and children during the August 2017 operations, including their indiscriminate killing, rise to the level of both war crimes and crimes against humanity”, said Radhika Coomaraswamy, another member of the Mission. “The crimes themselves, and the manner in which they were perpetrated, were found to be similar in nature, gravity and scope to those that have allowed for genocidal intent to be established in other contexts,” she added.

The report reveals a pattern of rape and other forms of sexual violence committed on a shocking scale. Hundreds, possibly thousands, of Rohingya women and girls were brutally raped, including in public mass gang rapes. Many victims were then killed or mutilated. This represents a particularly serious pattern of orchestrated and condoned sexual violence. The report concludes that “rape and sexual violence are part of a deliberate strategy to intimidate, terrorise or punish a civilian population, and are used as a tactic of war.”

The experts also expressed grave concern at the conviction and imprisonment of two Reuters reporters, Wa Lone and Kyaw Soe Oo. “These journalists have engaged in legitimate work investigating the extrajudicial killings of 10 Rohingya men in Inn Din, an incident we have now independently corroborated,” commented the experts.  “While the Reuters investigation brought this incident to light, regrettably it is just the tip of an iceberg of violent mass killings, others of which are detailed in our report.”

The report includes satellite images, setting out detailed analysis that corroborates information provided by victims and witnesses. The images show the transformation of much of northern Rakhine State over the past year, with at least Rohingya 392 villages razed to the ground, providing irrefutable documentation of the scale of destruction perpetrated.

Further satellite imagery shows that the burning has been followed with the clearance by bulldozers of large areas of land. “Through this process, many Rohingya villages have been rendered unrecognisable, devoid of all structures, trees and vegetation”, the report states. “Now, new security structures, infrastructure projects, and new villages, almost exclusively built for other non-Rohingya ethnic communities, are being constructed where Rohingya homes once stood.” In this light, the report casts serious doubts over plans for repatriation: “In the current circumstances, returns are not possible,” it says.

The report further details how the extreme violence perpetrated against the Rohingya in 2017 and their mass expulsion can only be properly understood against a backdrop of decades of institutionalised oppression and persecution affecting the lives of the Rohingya “from birth to death”. This includes the denial of legal status and identity; restrictions on freedom of movement, access to food, livelihood, health and education; and restrictions affecting private life such as marriage and birth. The Mission has also investigated thoroughly the 2012 violence between the ethnic Rakhine and the Rohingya, with a focus on the events in Maungdaw, Sittwe and Kyaukpyu. It concluded that the 2012 violence was not purely “inter-communal,” as asserted by the authorities, but actively instigated, through concerted hate campaigns, with the involvement of the Tatmadaw, the Police, other State institutions and many figures of authority.

Although their violations are nowhere near the same scale as those by the Tatmadaw, the Arakan Rohingya Salvation Army (ARSA) and the ethnic armed organizations (EAOs) operating in  Kachin and Shan States have not escaped scrutiny by the Mission. The report concludes that ethnic armed organizations have carried out extrajudicial killings, failed to take precautionary measures to protect civilians during attacks, destroyed property and forcibly recruited civilians, among other abuses.

Although international attention has focused overwhelmingly on the situation in Rakhine State, the report also sets out the findings of its detailed investigation into violations perpetrated in the northern states of Shan and Kachin. The report finds that the actions of the Tatmadaw in both Kachin and Shan States since 2011 amount to war crimes and crimes against humanity.

While the conflict in the north is ostensibly between the Tatmadaw and ethnic armed groups, civilians in Kachin and Shan are targeted, often simply for belonging to the same ethnic group as the Tatmadaw’s opponents. Through specific case studies, the Mission establishes the patterns of behaviour of the Tatmadaw in the northern States.

“As in Rakhine, civilians are targeted for killings, rape, arbitrary arrest and detention, enforced disappearance, forced labour, torture and ill-treatment, and persecution based on ethnic or religious grounds,” said Chris Sidoti, the Fact-Funding mission’s other member. “To date, the long-standing conflicts in the north of Myanmar have received inadequate international attention.  We hope our report will raise awareness of the critical situation in Kachin and Shan. We are seriously concerned that fighting is continuing in these regions, with new allegations of serious violations against civilians continuing to emerge.”

The report also finds a prevalent pattern of destruction of civilian homes and property in the north. Tens of thousands of people have been displaced in Kachin and Shan, and many continue to live in dire conditions in displaced persons’ camps.

The report also investigated the rampant hate speech in Myanmar disseminated through public pronouncements, religious teachings and traditional and social media including Facebook. “The Myanmar authorities have emboldened those who preach hatred and silenced those who stand for tolerance and human rights,” the report notes. “By creating an environment where extremists’ discourse can thrive, human rights violations are legitimised, and incitement to discrimination and violence facilitated.”

“The Tatmadaw acts with complete impunity and has never been held accountable for the violations of international law it is consistently involved in,” the report concludes. The report calls on the United Nations Security Council to refer Myanmar to the International Criminal Court, or to establish an ad hoc international criminal tribunal. It also calls for targeted individual sanctions, including travel bans and asset freezes against those who appear most responsible, and an arms embargo on Myanmar. The experts identified six individual senior commanders as most responsible, including the Tatmadaw Commander in Chief, Senior-General Min Aung Hlaing. An unpublished list containing additional names will be given to the High Commissioner for Human Rights who will be able to share it at her discretion with any competent and credible body pursuing accountability.

“Addressing situations like that in Myanmar touches on the very purpose of the United Nations,” the experts noted, emphasising the imperative for the organisation to continue its important work in country. “We call on all the competent organs and agencies of the UN to step up to the task, and to act with urgency and in accordance with the principles of human rights.”

“The international community has failed. Let us now resolve not to fail the people of Myanmar again,” they added.

Media products including videos, slideshows, satellite imagery and analysis and infographics are available at the Mission’s websitewww.ffmmyanmar.org

Report of the detailed findings of the Independent International Fact-Finding Mission on Myanmar – A/HRC/39/CRP.2

Human trafficking on China border can only be addressed by ending Burma Army...

U.K. Says Myanmar May Need to Be Referred to ICC over Rohingya
Scroll to top