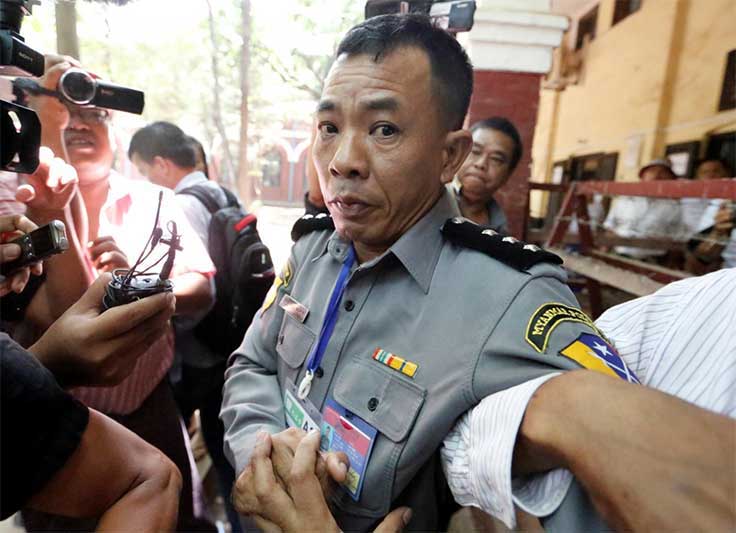 YANGON (Reuters) – A Myanmar police chief ordered officers to “trap” a Reuters reporter arrested in December, telling them to meet the journalist at a restaurant and give him “secret documents”, prosecution witness Police Captain Moe Yan Naing told a court on Friday.

Moe Yan Naing gave details to the court of the hours leading up to the Dec. 12 arrest of Wa Lone, 32, and Reuters colleague Kyaw Soe Oo, 28, who had accompanied him to the meeting, and said the police had arranged a “set up”.

The court in Yangon has been holding hearings since January to decide whether the pair will be charged under the colonial-era Official Secrets Act, which carries a maximum penalty of 14 years in prison.

They had been working on a Reuters investigation into the killing of 10 Rohingya Muslim men and boys in a village in western Myanmar’s Rakhine state, during an army crackdown that United Nations agencies say has sent nearly 700,000 people fleeing to Bangladesh.

Seven soldiers have been sentenced to “10 years in prison with hard labor in a remote area” for participating in the massacre, the army said this month.

Reuters was unable to immediately obtain a comment from lead prosecutor Kyaw Min Aung as the proceedings were ongoing. Myanmar police spokesman Police Colonel Myo Thu Soe could not be reached for comment.

Myanmar government spokesman Zaw Htay was not immediately reachable for comment. He has previously told Reuters that under Myanmar’s constitution the courts were independent and has declined to comment on the case, citing the ongoing proceedings.

In his testimony, the police captain said he had been interviewed in November by Wa Lone about police operations in Rakhine state. He was one of two officers from the paramilitary 8th Security Police Battalion who the police identified in December as “allegedly involved in the case”.

Moe Yan Naing said he had been under arrest since the night of Dec. 12 and had been told to testify on Friday as a prosecution witness.

He said that earlier on the day the Reuters reporters were arrested he was picked up from his post in Yangon and taken to Battalion 8’s headquarters on the northern edges of the city.

When he arrived, he said he found himself among a group of several other Battalion 8 policemen who had given interviews to Wa Lone. They were interrogated by a police “information team” about their interactions with the Reuters reporter, he said.

“Police Brigadier Tin Ko Ko gave the documents to Police Lance Corporal Naing Lin and told him to give them to Wa Lone and said that when Wa Lone comes out of the restaurant, the Htaunt Kyant regional police force has to entrap him and arrest him,” said Moe Yan Naing.

“Police Brigadier General Tin Ko Ko told the police members, ‘if you don’t get Wa Lone, you will go to jail’,” said Moe Yan Naing in a raised voice.

Reuters was not immediately able to reach Tin Ko Ko for comment.

The reporters have told relatives they were arrested almost immediately after being handed some rolled up papers at a restaurant in northern Yangon by two policemen they had not met before, having been invited to meet the officers for dinner.

Neither policeman has given testimony so far during the court proceedings.

Previous police witnesses have said the reporters were stopped and searched at a traffic checkpoint by officers who were unaware they were journalists, and were found to be holding documents relating to security force deployments in Rakhine.

Wa Lone and Kyaw Soe Oo have been in custody since Dec. 12.

Senior U.N. officials, Western nations and press freedom advocates have called for their release and diplomats from several embassies were among those attending Friday’s hearing.

Myanmar to free more than 8,000 prisoners in New Year amnesty

The Nightmare Returns: Karen hopes for peace and stability dashed by Burma Army’s...
Scroll to top