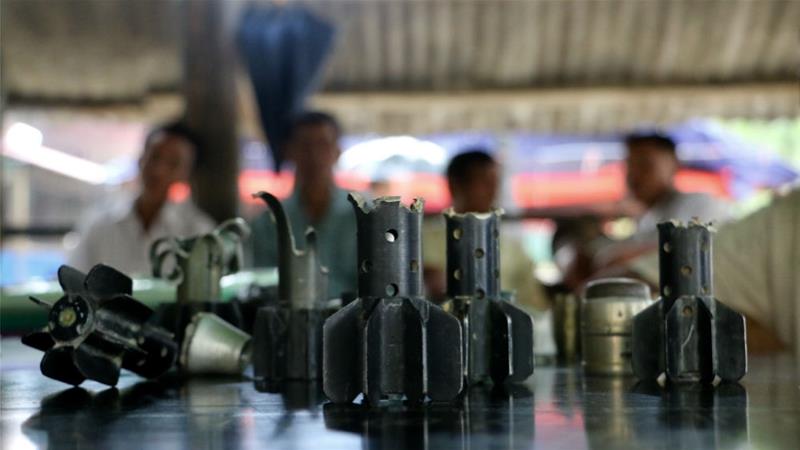 Yangon, Myanmar – As deaths from the new coronavirus mounted in South Korea, Iran and Italy in early March, Myanmar’s military called off grand plans to mark the 75th anniversary of its World War II revolt against Japanese forces. Instead, the Tatmadaw, as the military is known, deployed soldiers to disinfect hospitals and announced it would set up quarantine facilities to treat infected patients.

But rights groups say the Tatmadaw is doing little where it counts – ending the long-running ethnic conflicts in Myanmar’s border states, where some armed groups have called for a ceasefire to focus on the battle against the coronavirus.

“While the country is dealing with the COVID-19 pandemic, the military is escalating its offensives against ethnic armed groups in Rakhine, Chin, Karen and northern Shan state,” said Naw Hser Hser, general-secretary of the Women’s League of Burma.

“This needs to stop,” said the Hpa-an based activist. “We need to work together. Nobody can do it alone.”

In northern Shan state and in eastern Kayin state, where the Tatmadaw has for decades battled armed groups seeking more independence from the Burmese-dominated central government, reports of attacks and rights abuses by the military continue.

And in the impoverished western states of Rakhine and Chin, the Tatmadaw has stepped up its campaign against the Arakan Army, a rebel group seeking greater autonomy for ethnic Rakhine people.

The unrest continues even as the United Nations urges an end to conflict worldwide, and despite calls for a nationwide ceasefire from armed groups, diplomats and civil society groups, many of whom are worried the coronavirus outbreak in Myanmar could be catastrophic given the poor state of its healthcare system and lack of capacity to carry out testing. The country has recorded 74 cases so far.

On April 1, major ethnic armed groups in Shan and Rakhine states, including the Arakan Army, offered to extend a unilateral ceasefire until the end of the month because of the coronavirus outbreak, while groups in Kayin state, formerly known as Karen state, also urged the Tatmadaw to declare a nationwide ceasefire.

But the Tatmadaw, which had declared the Arakan Army a “terrorist group”, called the proposal “unrealistic”, with Brigadier General Zaw Min Tun criticising the groups for allegedly failing to heed the army’s previous calls for ceasefires.

On Monday, photos of dead bodies scattered on a road in Kyauk Seik village in Rakhine state circulated on the internet. Activists say eight villagers were killed after being struck by shells fired from a military base. The Tatmadaw called the allegation “fake news”.

But Thar Doe Aung, who lost three of his nephews in the attack, rejected the military’s claim. “It’s not fake news. Only we who suffered know what happened,” he told Al Jazeera over the telephone.

“We buried all of them in one grave,” he said of his nephews. “My sister is going crazy.”

A similar attack in Chin state on April 7 killed seven people, including a three-year-old.

The Arakan Information Center, a Malaysia-based organisation that has been monitoring the conflict since it escalated last year, said it has documented 121 civilian deaths this year. In the first half of April alone, it registered 45 deaths.

The figures represent a sharp increase compared with last year – a total of 140 civilians were killed in 2019. Access to the area is restricted making it difficult to independently verify the information.

“The military seizes the opportunity to carry out their operations while the international community is busy combatting the coronavirus,” said Nyi Nyi Lwin who runs the Arakan Information Center.

“We’ve seen helicopters and fighter jets deliberately attack civilians in order to weaken the support for the Arakan Army,” he said, adding that he expected the fighting to get worse in the coming weeks as the Tatmadaw may have to scale down operations during the monsoon season, which begins in May.

“In Rakhine state, people feel anxiety and uncertainty because of COVID-19, but what they fear most is the fighting,” said Nyi Nyi Lwin.

One 49-year-old woman from Mrauk Oo in Rakhine state, who was injured in an attack last year, said she has sought refuge in her neighbour’s bunker – a suffocating hole in the ground – several times because of the fighting.

“I don’t feel safe living here,” she said over the telephone. 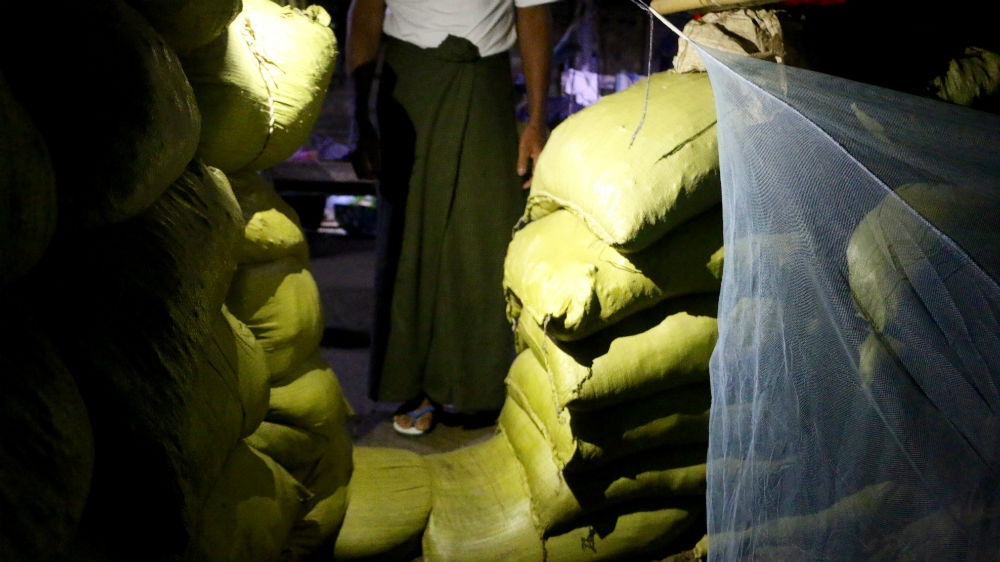 Meanwhile, the UN refugee agency said it has “observed a sharp upward trend in civilian casualties” since February.

In a statement on March 27, the agency said at least 21 civilians were killed amid clashes on the border between Rakhine and Chin states earlier in March, while an additional 10,000 people were displaced in Rakhine in that period alone. The UN humanitarian office said a total of 70,000 people have been displaced in the fighting between the military and the Arakan Army in the past 12 months, most of them since December last year.

Observers say the conflict between the Arakan Army and the military has brought new chaos to the impoverished region from where more than 730,000 Rohingya fled a bloody military crackdown in 2017.

The rising death toll and displacement has prompted concern, with 139 civil society organisations issuing a joint statement on Wednesday, calling for the immediate protection of those who have nothing to do with the fighting.

“The current targeting of innocent civilians in the conflict between the Arakan Army and the Myanmar military amounts to war crimes and must immediately cease,” the statement said.

The US State Department also said it “is deeply troubled by the escalating violence in Rakhine and Chin states”.

But military spokesman Zaw Min Tun blamed the uptick in violence on the Arakan Army. Soldiers stationed in Rakhine state have been “helping, taking care of and protecting” civilians for decades, he told Al Jazeera. 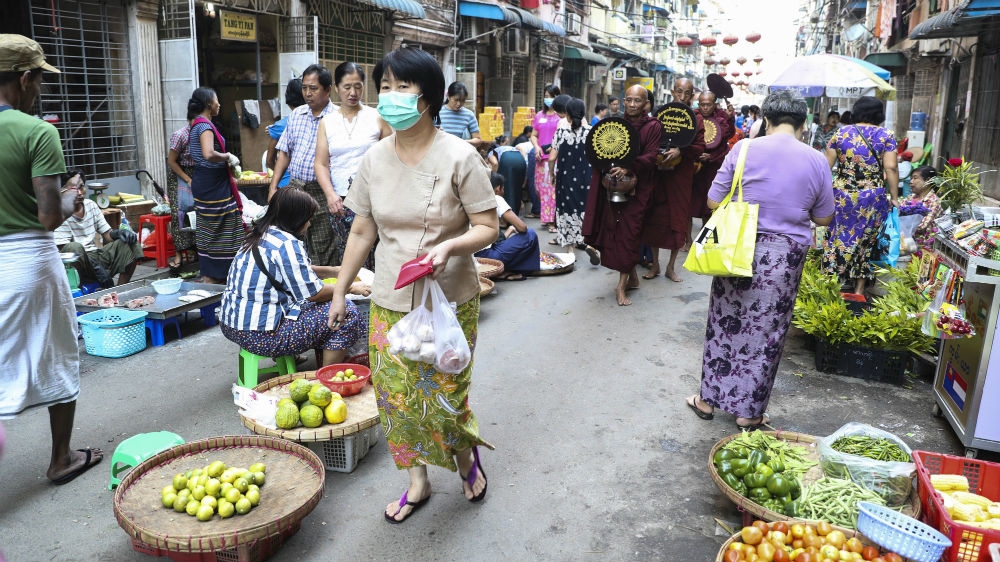 Even outside of Myanmar’s many battlefields, there has been a rise in the harassment and prosecution of journalists and blocking of websites reporting on ethnic conflicts in recent weeks.

Nay Myo Lin, Mandalay-based editor-in-chief of Voice of Myanmar was charged with terrorism after publishing an interview with a spokesman from the Arakan Army.

Police also raided the offices of Rakhine-based Narinjara and briefly detained three of the outlet’s journalists on March 31 over interviews with the rebels. Its website was also blocked on charges of spreading “fake news”.

Meanwhile, mobile internet in several townships in Rakhine and Chin, where fighting is going on, has almost continuously been shut down since June last year, a move aid workers say makes it more difficult to fight the coronavirus.

‘Running from the military’

Elsewhere in Myanmar, civil society groups have accused the military of engaging in abuses that hamper efforts to fight the virus.

“Communities are now being threatened by both the pandemic and serious human right violations,” organisations representing the Ta’ang minority in northern Shan state said on April 8. The groups said they had documented 18 cases of arbitrary arrest, torture, and forced portering for the military in March, including an instance in which a villager died after stepping on a landmine.

In southeastern Myanmar, human rights groups said they have observed abuses, too.

“The military is burning agricultural land and threatening villagers in an area where they want to build a road,” said Naw Hser Hser from the Women’s League of Burma. “Instead of worrying about the coronavirus, villagers are on the run from the military.”

“At a time when everyone needs to work together to fight the coronavirus pandemic, the government of Burma and the Burma Army seem to see the global focus on the pandemic as an opportunity to further crack down on ethnic people,” said Naw Htoo Htoo, a spokeswoman for the Karen Peace Support Network.

“Until the international community force the military and the government to pay a price for killing and oppressing our people, they will continue to do so,” she said.