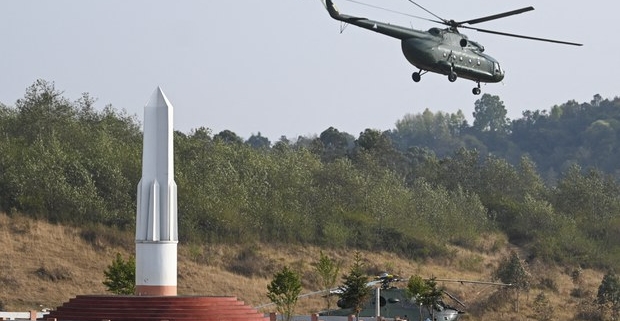 Sources said the military fired indiscriminately into the village in response to a militia attack the day before.

Military attacks in Myanmar’s Sagaing region killed at least 15 people this week, including four siblings aged 5-26 who died when a missile fired from a helicopter struck their home, sources said.

The two Mi-35 attack helicopters on Jan. 4 launched six rockets and fired machine guns into Gahe village, part of Indaw township in Sagaing, a northwestern region that has been a hotbed of resistance to the military regime that overthrew Myanmar’s elected government nearly a year ago.

The attack on Gahe was the first time the military used heavy weapons against the village, a resident of Gahe village, who did not want to be named for security reasons, told RFA’s Myanmar Service.

“Our village was a peaceful place and they attacked us for no reason,” she said

“We used to go out and watch the planes when they passed by, but now we wouldn’t dare doing anything like that. One of the helicopters shot explosive rockets at us and the other used a machine gun,” she said.

Of the six rockets fired into the village, five exploded. The attack killed four siblings aged 5, 9, 13 and 26, and a 30-year-old woman.

Only the body of the 30-year-old could be buried properly. The bodies of the siblings could not be recovered. They died when one of the rockets exploded in their house and it burned to the ground with them inside, sources said.

Additionally, one of the five people wounded in the attack was a child who fled into the jungle and has not yet received medical treatment, they said.

Sources estimate that 800 people from Gahe and the surrounding villages have been displaced due to fighting between the military and local militias, called People’s Defense Forces (PDF), who oppose the military’s ousting of Myanmar’s democratically elected government almost a year ago.

In addition to the five deaths in Gahe, another 10 people were killed on Thursday in Kalay township, which is located in the western part of Sagaing on the border with India, when they returned to their villages after fighting there had seemingly died down, sources said.

“The people returned to the village believing the situation had cooled down. Then the soldiers came back all of the sudden and shot everyone they saw and at least 10 were killed,” a resident of Kalay told RFA.

Only two of the people killed in the attack have been identified, and the bodies have not yet been recovered. Nearly 10 houses in nearby Ingyun and Hakha Lay villages were also reported to have been set on fire Thursday.

After the attack in Gahe, the military continued conducting operations near the village and were still firing heavy weapons in the surrounding area, another resident of Gahe told RFA on condition of anonymity.

“I think they attacked our village thinking there were PDF members in the village. There are no PDFers here,” she said.

“This kind of thing has happened before in Htigyaing. We heard about 70 people lost their lives there” she said, referring to a township adjacent to Indaw.

Many villagers fled their homes and took refuge in monasteries in Nar Naung and Kyawywar villages, another villager told RFA.

“Some villagers have gone to be with their relatives but most of us are in monasteries because the soldiers came into the village the other day and spent the night there,” she said.

“When we left the village, we heard gunfire and small explosions. We were all scared and went to the monastery to take shelter,” she said.

One day prior to the helicopter attack, PDF members attacked two military vehicles about 10 miles away from Gahe.

RFA tried to contact Maj. Gen Zaw Min Tun, spokesman for the military junta, but he did not respond.

Airstrikes against villages have happened frequently over the past year, an officer with the Kachin Independence Army (KIA), an ethnic armed group that has been fighting the military since before the coup, mostly in nearby Kachin State, told RFA.

“The Sagaing region is close to us. Our No. 26 Battalion is in the area. When there are movements in the area, there is some kind of confrontation. So, when that happens, they use airstrikes,” he said.

Naw Bu said that the KIA has not launched attacks in the Sagaing region but has retaliated against military action in Kachin state. The military usually responds with airstrikes, he said.

According to data compiled by RFA based on statements by the shadow National Unity Government (NUG), there were 597 armed clashes in Sagaing region in the five months from June to November 2021, and a total of 274 civilians and 1,137 junta soldiers were killed over the same period.

The number of civilians killed by both sides in Sagaing through early December 2021 totaled at least 414, based on NUG monthly statements and reports from local media.

According to the Institute for Policy and Strategic Studies, more than 75,250 people have been displaced by clashes in Sagaing region in the nine months from the coup until the end of October.

JOINT STATEMENT BY THE CIVIL SOCIETY ORGANIZATIONS OF MYANMAR AND CAMBODIA CONDEMNING...