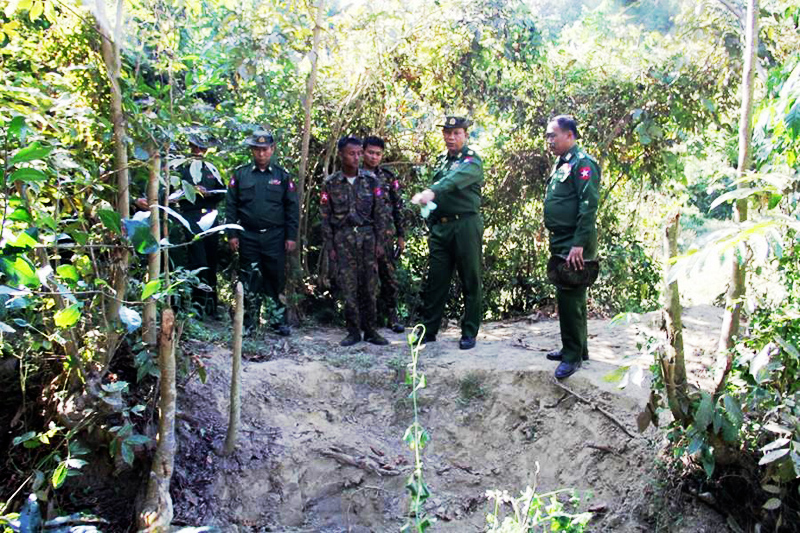 YANGON: Myanmar’s military admitted on Wednesday its soldiers had murdered 10 captured Muslim “terrorists” during insurgent attacks at the beginning of September.

Local Buddhist villagers joined in the mass murder by digging the mass grave and forcing the captured men into it.

“Villagers and members of the security forces have confessed that they committed murder,” the military said in a statement.

A five-member military team led by Lt Gen Aye Win visited the mass grave (seen in photo above) and interviewed 49 witnesses, according to the armed forces’ statement.

It was the first known admission of wrongdoing by the Myanmar military during its operations in the western state of Rakhine.

A statement released by watchdog Amnesty International condemned the massacre but said it has strong evidence of other mass murders of Rohingya by the tatmadaw, or Myanmar armed forces.

The Wednesday statement, said AI, “is only the tip of the iceberg and warrants serious independent investigation into what other atrocities were committed amid the ethnic cleansing campaign that has forced out more than 655,000 Rohingya from Rakhine State since last August”.

“Amnesty International and others have documented overwhelming evidence that far beyond Inn Din, in villages and hamlets across northern Rakhine State, the military has murdered and raped Rohingya, and burned their villages to the ground. These acts amount to crimes against humanity and those responsible must be brought to justice.”

The army launched a sweeping counter-offensive in the north of the state in response to Rohingya militant attacks on Aug 25, triggering an exodus of more than 650,000 Rohingya Muslim villagers.

The United Nations has condemned the army’s campaign as ethnic cleansing. Myanmar denies that, saying its forces were carrying out legitimate counterinsurgency operations.

The military announced on Dec 18 that a mass grave containing 10 bodies had been found at the coastal village of Inn Din, about 50 kilometres north of the state capital Sittwe. The army appointed a senior officer to investigate.

The military said on Wednesday its investigation had found that members of the security forces had killed the 10 and that action would be taken against them. 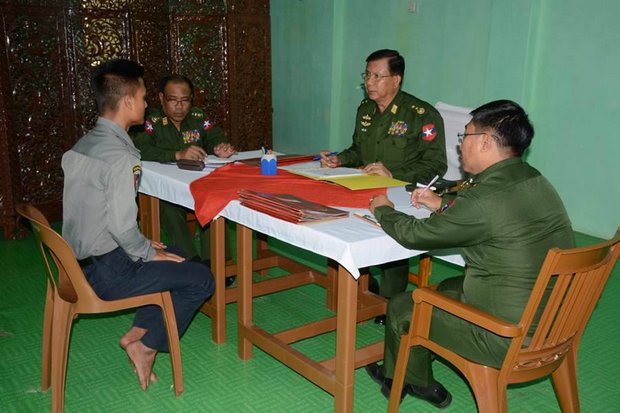 Security forces had been conducting a “clearance operation” in the area on Sept 1 when “200 Bengali terrorists attacked using sticks and swords”, the military said in a statement posted on the Facebook page of its commander-in-chief, Snr Gen Min Aung Hlaing.

The military refers to members of the Rohingya Muslim minority as “Bengalis”, a term the Rohingya reject as implying they are illegal migrants from Bangladesh.

Ten of the attackers were captured after the security forces drove the rest off by firing into the air, according to the statement on Facebook, which the military often uses to make announcements.

The captives should have been handed over to the police, in line with procedures, but the militants were attacking “continuously” and had destroyed two military vehicles with explosives, it said.

“It was found that there were no conditions to transfer the 10 Bengali terrorists to the police station and so it was decided to kill them,” the military said, referring to the findings of the investigating team.

Angry ethnic Rakhine Buddhist villagers, who had lost relatives in militant attacks, wanted to kill the captives, and stabbed them after forcing them into a grave on the outskirts of the village. Then members of the security forces shot them dead, the military said.

“Action will be taken against the villagers … and the security force members who violated the rules of engagement according to the law,” the statement said.

Action would also be taken against those who had failed to report the incident to their seniors, and those responsible for supervising the operation, it added.

The military investigation was led by Lt Gen Aye Win. The same officer had been in charge of a wider probe into the conduct of troops in the conflict that concluded in a report in November that no atrocities had taken place.