The people of Myanmar are facing a humanitarian catastrophe, with large-scale suffering caused by violence and displacement, an economic and food security crisis, and a public health emergency within which a deadly new wave of Covid-19 is wreaking havoc.

Myanmar is in dire need of humanitarian aid. But this aid needs to be politically sensitive.

It is essential to “frame” Myanmar’s current humanitarian crisis as a political and human rights crisis. Indeed – as highlighted by Professor Hugo Slim, a specialist in the ethics of war and humanitarianism – Myanmar is facing a political emergency in which a civil resistance movement is legitimately opposing a violent regime.

Myanmar has a long history of conflict between the Tatmadaw (armed forces) and ethnic armed organizations (EAOs) struggling for self-determination in border areas. But if international actors frame the whole of the situation in Myanmar as the result of conflict (or, worse, “ethnic conflict”), it makes it far too easy for the military-run State Administration Council to deny any responsibility.

Instead, what is needed is recognition that, first, the humanitarian crisis cannot be isolated from what is a human-rights crisis driven by a military bent on terrorizing local populations to retain power; and, second, that deeply embedded structural violence and injustices lie at the root of Myanmar’s decades-long conflicts.

“Framing” the crisis in Myanmar as a political and human-rights crisis is obviously important from a moral perspective. It is also essential for the development of humanitarian programs.

The military has already blocked the delivery of humanitarian aid in many ethnic areas, as well as deliberately destroying food and medical supplies, diverting aid away from its intended recipients, and attacking aid workers. These acts constitute violations of international humanitarian law.

Myanmar soldiers on the march amid an anti-coup protest. Image: Getty via AFP / Hkun Lat
There are also major political and ethical implications in maintaining any kind of relationship that might signal international recognition of the State Administration Council.

For one – and even if this is not the intention of the agencies involved – international aid could legitimize a regime that is committing widespread and systematic attacks against the Myanmar people, which amount to crimes against humanity.

Second, if international agencies are seen as “siding” with the State Administration Council, this may sow distrust among local populations who overwhelmingly oppose the coup.

Third, this could create major tensions within aid agencies themselves – with many local staff opposing the State Administration Council.

In Myanmar’s political minefield, no matter how much international actors claim to be neutral, how they channel aid will not be perceived as neutral. Attempts at neutrality can also do real harm, particularly if – by not taking a stand or by having their aid politicized by the military regime – international actors end up emboldening and enabling those behind Myanmar’s human-rights crisis.

At the same time, as Hugo Slim highlights, “neutral humanitarian action is one version of humanitarianism – not the only version” – and it is not necessary to be neutral to be a good humanitarian.

The debate about humanitarian neutrality is far from new in Myanmar, with neutrality having been used in the past to justify shifts in international aid.

In the 1990s and 2000s, when Myanmar was under military rule, international donors provided aid in ways that in essence bypassed the junta – either by funding international non-governmental organizations or UN agencies operating inside Myanmar and/or by funding “cross-border aid.” These approaches were shaped by isolationist policies and concerns that aid would be misappropriated by and bolster an illegitimate military regime.

In the past, donors described funding for cross-border aid as a way to support actors who were seen as legitimate “agents of change” in Myanmar.This amounted to a “solidarist” approach “employing humanitarian action within a political strategy on behalf of victims.” But when donors’ political aims in Myanmar shifted, so too did definitions of legitimate humanitarian action.

When Thein Sein’s government came to power in 2011, donors were encouraged by indications of political change in Myanmar and keen to engage with the new reformist leadership. Major Western donors were also influenced by broader geopolitical considerations, as they attempted to counter China’s influence in the region and to compete for stakes in Myanmar’s developing market economy.

Many donors shifted to channeling aid through official mechanisms inside Myanmar. In this evolving politics of international aid, cross-border aid organizations faced significant funding cuts. These cuts were often justified by claims that cross-border organizations were too political, or non-neutral, with the latter becoming synonymous, in the lexicon of many influential stakeholders at the time, with “un-humanitarian.”

Nevertheless, over the past decade, ethnic and community-based service providers have continued to provide essential services to local populations in border areas.

With conflict and displacement now increasing in the border areas, and with Civil Disobedience Movement members and other civilians from urban areas fleeing to areas controlled by EAOs, ethnic and community-based service providers are facing increased demand for their services. Some of these organizations are also at the forefront of responding to Covid-19.

These organizations therefore have the human resources and networks in place to respond in Myanmar’s current crisis. But they are in desperate need of funding. Funding them would obviously not be a neutral act.

But rather than trying to be neutral, what is important is that international donors and aid organizations do no harm. To achieve this, priority should be given to support that will not legitimize the State Administration Council.

At the same time, priority should be given to working with community-level and civil-society actors in ways that enable the provision of life-saving assistance and that demonstrate real commitment to decolonizing aid. As Myanmar activist Khin Ohmar argues, working around ethnic and community-based organizations rather than with them “represents a continued colonization of aid practices – a denial of locals’ agency.”

This picture taken on July 14, 2021, shows people waiting to fill up empty oxygen canisters outside a factory in Yangon, amid a surge in the number of Covid-19 coronavirus cases. Photo: AFP / Ye Aung Thu
To assist populations in conflict-affected border areas, international donors should fund cross-border aid, and international NGOs and UN bodies should work with ethnic and community-based service providers as equal partners, supporting the distribution of aid through these organizations.

To address the Covid-19 crisis, support should be coordinated with the Covid-19 Task Force, formed by the National Unity Government and ethnic health organizations.

This is important to address immediate humanitarian needs, but also to contribute to longer-term development and peace-building aims.

Myanmar’s military coup and defunct peace process highlight what many had said all along: that equitable development and lasting peace will never be achieved without real, systemic change – without reducing the control of the Bamar military elite over the state and without recognizing and strengthening ethnic service and governance systems.

Supporting and building the sustainability of ethnic and community-based service systems will help to address some of the structural inequities and injustices that have fed into decades of conflict in Myanmar.

At the same time, populations in more central, government-controlled areas are also in dire need of humanitarian aid. To access these populations, international NGOs and UN agencies should listen to civil society and community-level actors, and work with these actors in ways that limit involvement from the State Administration Council and that enable true localization of humanitarian decision-making and responses.

Moreover, with Myanmar’s current Covid-19 crisis presenting severe risks for the wider region, there is a clear impetus for a regional response.

Diplomatic and political pressure must be exerted by international donor countries on Myanmar’s neighbors, to allow for unrestricted cross-border humanitarian operations. At the same time, pressure must also be exerted on the Association of Southeast Asian Nations and neighboring countries to help negotiate access for the Covid-19 response and advocate for the protection of health workers across the country.

With Myanmar’s human-rights crisis forcing international actors to recognize that aid is politicized and has political impacts, international donors and aid organizations must remain committed to provided life-saving humanitarian aid.

But in doing so, they must also demonstrate solidarity with the people of Myanmar, who have overwhelmingly rejected the military regime and continue to suffer because of its violent actions.

The full version of this article was originally published by Melbourne Asia Review, Asia Institute, University of Melbourne. 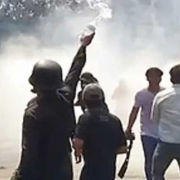 At least 18 dead, says UN human rights office, as Myanmar police crack down on protests for…