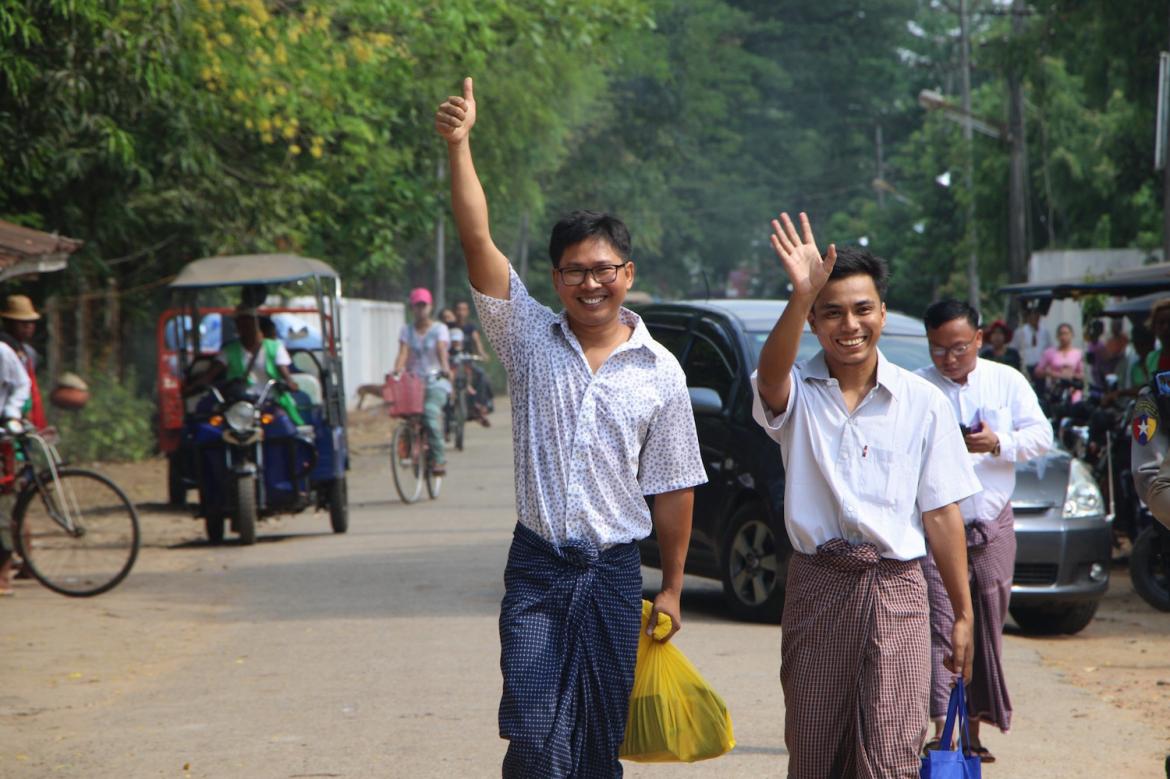 Two Reuters journalists imprisoned in Myanmar for their reporting of the ethnic cleansing of Rohingya Muslims have been pardoned and released after spending more than 500 days in jail.

Wa Lone, 33, and Kyaw Soe Oo, 29, were arrested in December 2017 and accused of breaking the colonial-era Official Secrets Act, and have been imprisoned in Yangon’s Insein jail ever since.

The pair were released on Tuesday as part of an amnesty of 6,520 prisoners by President Win Myint. The chief of Insein prison, Zaw Zaw, confirmed Wa Lone and Kyaw Soe Oo had been freed.

Speaking moments after his release, Wa Lone said: ““I’m really happy and excited to see my family and my colleagues. I can’t wait to go to my newsroom.”

Stephen J Adler, the editor-in-chief of Reuters, said he was “enormously pleased that Myanmar has released our courageous reporters, Wa Lone and Kyaw Soe Oo”.

“Since their arrests 511 days ago, they have become symbols of the importance of press freedom around the world. We welcome their return,” Adler said.

Amal Clooney, who joined the legal team working on their case a year ago, paid tribute to the “incredible determination” of Reuters “in their pursuit of justice for their brave reporters Wa Lone and Kyaw Soe Oo”.

“It is inspiring to see a news organisation so committed to the protection of innocent men and the profession of journalism,” said Clooney. “I hope that their release signals a renewed commitment to press freedom in Myanmar.”

At the time of their arrest, the pair were working on an in-depth investigation into the brutal violence carried out against the Rohingya in Rahkine state by Myanmar’s military in August 2017 which forced more than 700,000 people to flee to Bangladesh and led to accusations of genocide.

Wa Lone and Kyaw Soe Oo, Myanmar nationals who work for the international news agency, have continuously maintained their innocence and stated they were set up by the police who planted official papers on them at a meeting.

After a drawn-out trial which was widely regarded as a sham, with flimsy evidence and contradictory witnesses, including a policeman who told the court he had been instructed to set up the sting operation, the pair were sentenced to seven years in prison in September.

The pardon of the pair, by the Myanmar president, comes after 16 months of mounting pressure from international governments, diplomats, human rights organisations and even religious figures, which up to this point had appeared to fall on deaf ears. De facto leader and Nobel laureate Aung San Suu Kyi has also repeatedly rebuffed calls by figures such as US vice president Mike Pence for her to pardon the pair, and within Myanmar there has been little sympathy for them.

Their long-awaited release one month after the highest court in Myanmar, the supreme court, rejected the final judicial appeal to overturn their sentence. The Myanmar government also did not chose to pardon Wa Lone and Kyaw Soe Oo in the annual New Year amnesty this year, which saw 9,000 prisoners released.

It is unclear why the decision to pardon the pair was made now. However, this week senior diplomats and international officials are in Myanmar to discuss the situation in Rahkine with the Myanmar government, in a meeting of the International Advisory Commission. The commission was set up in 2017 to help Myanmar implement recommendations made by late former UN head Kofi Anan on resolving the ongoing conflict in Rahkine state.

While the Myanmar government insists it has implemented most of Anan’s recommendations, the situation in Rahkine, and the plight of the RohingyaMuslims, has not improved.

Present at their release from prison on Tuesday was Lord Ara Darzi, a member of the House of Lords who is on the International Advisory Commission. He said he had been involved in “months of dialogue” with the Myanmar government, Reuters and the UN as well as various governments and international organisations, which he did not name, to negotiate the pardoning of the journalists.

“I am delighted that the Reuters reporters, Wa Lone and Kyaw Soe Oo, have been granted a pardon, released from custody, and are with their loved ones once more,” said Darzi. “This outcome shows that dialogue works, even in the most difficult of circumstances.”

News of the release was greeted with a chorus of approval from figures and organisations around the world.

“We congratulate Wa Lone and Kyaw Soe Oo on walking free from unjust imprisonment and applaud they have now been reunited with their families,” said Phil Robertson, Human Rights Watch’s deputy director for Asia. “These courageous investigative journalists should have never been arrested, much less imprisoned, in the first place and their release was long overdue.”