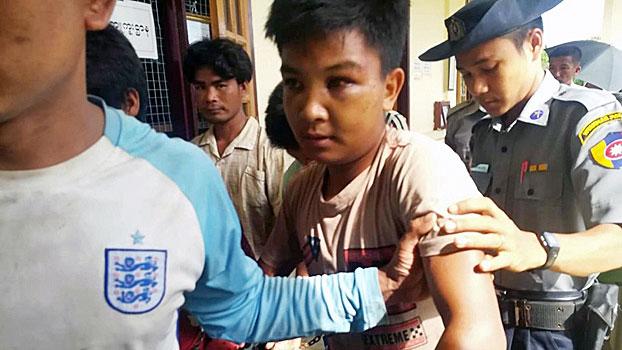 Nine civilians detained by the Myanmar military on suspicion of attacking an army column appeared on Tuesday in court in war-ridden Rakhine state’s Mrauk-U township, with two of them accusing soldiers of torture and rights abuses while in custody, their family members and a rights group said.

Myo Hein Swe and Soe Maung Than, residents of Tin Htein Kan village, were arrested along with seven others near Waitharli village on June 22 as suspected members of the Arakan Army (AA), an ethnic Rakhine Army fighting Myanmar forces for greater autonomy in the state. They were apprehended following an AA attack on security forces with remote-controlled mines on a road near the village.

When the pair appeared for their trial in Kyauktaw Township Court, they said they were maltreated during questioning in the jail where they are being held, according to their relatives and members of Rakhine Human Rights Protection who attended the hearing.

Maung Thein Hla, father of Myo Thein Swe, who said he hardly recognized his son in court because his face was badly swollen and bruised, blamed the injuries on possible beatings.

“My son’s face is badly swollen, his eye sockets are bruised, and his eyes are reddened,” he said. “I barely recognized him when I first saw him.”

“The judge asked during the testimony how they got these injuries,” he said. “They all answered that they got the injuries after being kicked and hit with gun butts and beaten by soldiers.”

Members of Rakhine Human Rights Protection noted that four of the detainees trial had facial injuries.

Myo Hein Swe and Soe Maung Than, another detainee who appeared in court, had serious injuries and received medical treatment at Kyauktaw Hospital after the trial, they said.

Their family members said doctors took X-rays of the men because they complained of chest pain and other aches.

“This is totally unacceptable,” he said, adding that torture of civilians by authorities violates the United Nations resolution on torture.

“This is a violation of that mandate and of human rights,” he said. “If they were arresting the young men as suspects, they would have to transfer them to local police after conducting proper interrogations within 24 hours.”

Myat Tun also appealed to authorities to discontinue the arbitrary arrest and torture of civilians in the conflict zone and said his group would submit a complaint letter and photos of the detainees’ injuries to the Myanmar National Human Rights Commission, per a request from their family members.

“[But] if it is a very serious case, we investigate it ourselves,” he said. “Afterwards, we send a report with advice and recommendations to the relevant ministry. This is our regular procedure.”

‘The truth will come out’

AA spokesman Khine Thukha accused the Myanmar military of forcing Myo Hein Swe and Soe Maung Than to say they were members of the ethnic army.

“These two young men were traveling to town to withdraw some money,” he said. “But the Myanmar military arbitrarily arrested them along the way and tortured them. They forced them to say they were AA members.”

“They keep committing these arbitrary arrests and torture in contrast to their stated goal of unity for ethnic groups in the country,” he added.

Military spokesman Brigadier General Zaw Min Tun said the truth about the torture allegations will come out in court.

“The truth will come out during the trial,” he said. “Whether it was the military or security forces or the police force arresting them, they are supposed to interrogate them properly after the arrests.”

“They will be submitting their own evidence from interrogations to the court,” he said. “The detainees may testify about their experiences in detention during the trial. The judge will cross-examine their testimonies.”

In a related development, Rakhine state lawmakers on Wednesday unanimously supported a motion to petition the Myanmar government to resume internet service in eight townships in Rakhine and one township in neighboring Chin state affected by the fighting.

On June 20, the government ordered four telecom providers to temporarily suspend the service to areas where fighting has occurred as a security measure.

Rakhine state lawmaker Hla Thein Aung, who submitted the motion on Monday, said the service disruption could lead to more violence in the region.

Domestic and international rights groups as well as Yanghee Lee, the U.N. special rapporteur on human rights in Myanmar, also took aim at the government’s move, saying that the cutoff of mobile data networks would hamper the communication of civilians, prevent journalists from reporting on the conflict, and affect monitoring in conflict zones in Rakhine and Chin states.

Also on Wednesday, the Myanmar military said there had been fewer conflicts with ethnic armed groups in the past six months during a unilateral cease-fire it declared late last year, though skirmishes continue to occur.

Besides Rakhine state, government forces have been battling ethnic armies mainly in Kachin and northern Shan states, where more than 107,000 civilians have been displaced.

In December, the Myanmar military declared a four-month unilateral cease-fire in five of its military command regions in a bid to breathe life into the country’s teetering peace process, though it excluded Rakhine state. The armed forces later extended the cease-fire for two additional months.

The ethnic armies oppose military demands that they lay down their arms and form a single army, and not secede from the federal union that Myanmar seeks to create once peace is established.

“In general, we have had fewer clashes and almost no fighting with KIA,” he said. “We fought with the RCSS/SSA and SSPP during the first four months, but in the last two months, fighting against these two groups decreased.”

“We had clashes in Kutkai, Mongpon, Namsang, and Kyaukme in June,” he said. “The government army built military camps and had recruited more troops during the past six months. We had to attack the government army because it entered our territory.”

Because the number of battles has decreased, some internally displaced persons (IDPs) who have been living in temporary camps have been able to return home, Zaw Min Tun said.

“[The] military has allowed IDPs to travel in some regions and supported them,” said San Aung, spokesman for the Peace-talk Creation Group (PCG) based in Kachin state’s capital Myitkyina.

“We can’t close [entire] camps because each camp has people from different villages,” he said. “Although people from one village can return home, we can’t shut down the camps because there are still other IDPs from other villages in them.”

Some ethnic groups said that the Myanmar military’s cease-fire has largely failed because it has made little political headway in the country’s peace process.

“The government army has declared a cease-fire for six months, but hasn’t done anything politically to improve the situation, so the peace process has not seen any developments,” said Sai Laik, joint secretary of the Shan National League for Democracy Party (SNLD). “It has been a waste of time [because] it depends on the political desires of both sides.”

“The military seems to have blocked the door of the peace process” he said. “The way for peace talks is blocked because there are restrictions like having a single army and refraining from seceding from the Union.”

There Is No One Who Does Not Miss Home