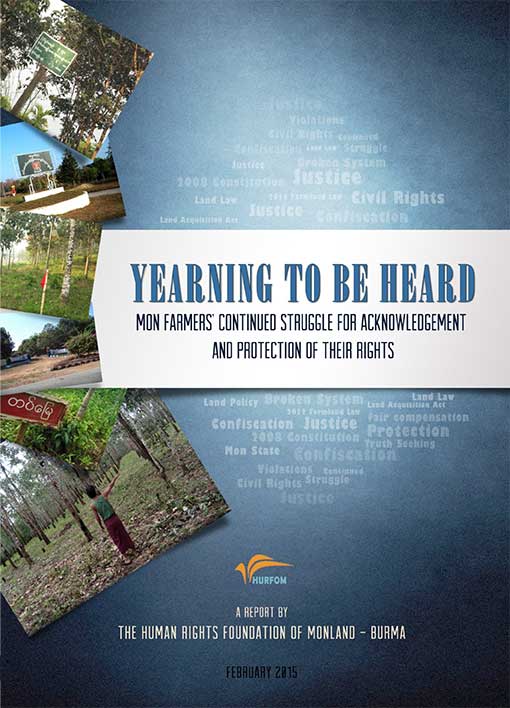 Media Release: Yearning to be Heard: Mon Farmers’ Continued Struggle for Acknowledgement and Protection of their Rights

Victims of land confiscation under the previous military regime and today’s quasi-civilian government demand justice through reparations and the protection of their rights under the law, however, relevant authorities consistently neglect their calls for justice, leaving the majority of cases of land conflict throughout Burma’s ethnic states unresolved.

With particular attention to ongoing land conflict in Mon State, the Human Rights Foundation of Monland (HURFOM) has produced Yearning to be Heard: Mon Farmers’ Continued Struggle for Acknowledgement and Protection of their Rights, in efforts to advocate for ethnic Mon farmers’ land rights. Throughout this report, HURFOM contends that land conflicts in Mon State must be adequately and independently investigated in order to provide justice to victims of land rights abuse, in simultaneous effort in identifying the root cause of land conflict in Burma.

Beyond reporting the vast numbers of civilian land unjustly confiscated by Burmese army battalions,Yearning to be Heard presents an in-depth analysis of current domestic land law and policy, as well as proportional laws, which are of significant importance to solving Burma’s extensive land conflict.

HURFOM identifies the central causes of land conflict in Burma to be found in land policy that refuses to recognize communal and ancestral rights and fails to protect ethnic farmers’ rights, the absence of available legal avenues through which victims may take action against unjust confiscations which have been perpetrated by the military in accordance with antiquated laws, the Ministry of Agriculture and Irrigation’s monopoly over land management and allocation, the lack of any real authority granted to government-appointed land commissions and committees in decision-making and conflict resolution, and political parties’ reticence in supporting and promoting the resolution of Burma’s land conflict.

Through Yearning to be Heard, HURFOM documents evidence regarding abuses perpetrated against Mon landowners’ rights and their struggle for just resolution. HURFOM urges relevant government bodies to recognize ancestral land laws, immediately stop all acts of land confiscation, to protect landowners’ rights, and for the government to establish an independent judicial body which victims may access to obtain fair judgment on cases of land conflict.

Hard copies of the report, as well as print-quality photos for news publication can be obtained by emailing monhumanrights@gmail.com,

About HURFOM:
The Human Rights Foundation of Monland (HURFOM) is a Thailand-based non-governmental human rights organization founded in 1995 by a group of Mon youth, students and community leaders. HURFOM works to monitor the human rights situation in southern Burma, and publishes print and online news, lengthy reports and analysis of ongoing human rights violations. More information can be found at www.rehmonnya.org

Yearning to be heard: Mon Farmers’ continued struggle for acknowledgement...
Scroll to top