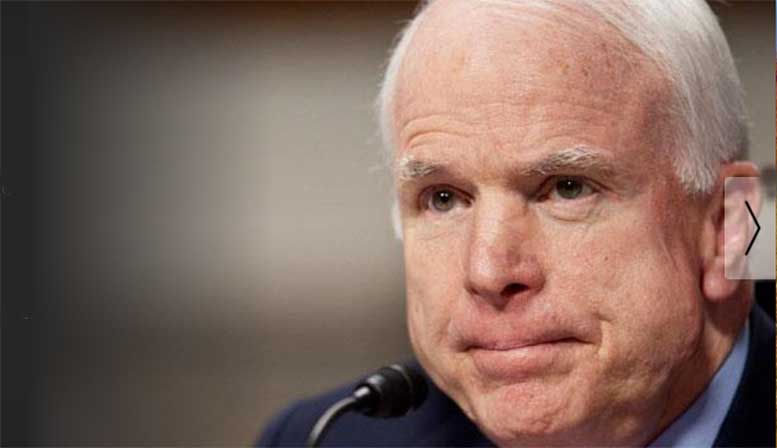 The Burma Human Rights and Freedom Act would prohibit certain military cooperation with the Burmese military until the Departments of State and Defense can certify that officials have halted the violence. The bill would also support economic and security sector reform, and encourage Burma’s successful transition of power to a civilian government.

“The scale of human rights abuses against the Rohingya people and other minority communities in Burma has been staggering,” said Senator McCain, Chairman of the Senate Armed Services Committee. “The United States has a moral obligation to do all it can to prevent mass atrocities and ethnic cleansing—and to make clear to those responsible that their actions will not be tolerated. Our legislation’s passage out of the Senate Foreign Relations Committee is a step in the right direction to protect Burma’s fledgling democracy and hold accountable the senior military officials responsible for the slaughter and displacement of more than 680,000 innocent Rohingya men, women and children. It makes clear that the United States will not stand for continued atrocities and will support all Burmese peoples in their struggle for freedom and democracy.”

“Today’s passage marks a significant step in the right direction to recalibrate U.S. policy and engagement with Burma in light of the genocide and crimes against humanity that have taken place over the past several months against the Rohingya, as well as the broader challenges of a stalled political transition and genuine national reconciliation,” said Senator Cardin, a senior member of the Senate Foreign Relations Committee. “This legislation is not meant to hurt the people of Burma or its economy, but instead hold specific senior military officials accountable. That is why the legislation also requires a U.S. strategy for promoting inclusive economic growth as a vital element of a strategy to help Burma complete its political transition and finally free itself of military control.”

Over 680,000 Rohingyas have been displaced to Bangladesh and thousands more have been killed due to a systematic campaign of executions, rape, disenfranchisement, expulsions and mass burning of villages by the Burmese military. This legislation will make it easier for the administration to impose sanctions on the Burmese military leaders who are implicated in some of the worst atrocities facing the international community in a generation. It will authorize humanitarian and reconciliation assistance to help address the crisis in the short and long-term, and, critically, requires a strategy on accountability measures for the ethnic cleansing and genocide that has, incontrovertibly, been committed. This legislation would enhance the administration’s capacity to impose narrowly tailored and targeted sanctions and travel restrictions on specific military and security personnel implicated in the violence, perpetrators like the generals who exercised command and control over the ethnic cleansing campaign; and ground commanders in Rakhine State when the atrocities occurred.

“Ultimately, it is up to the people of Burma to decide what the fate of their country and democracy will be. But the United States Congress should not be complicit spectators to ethnic cleansing and gross human rights violations. For too long we have said ‘never again,’ but failed to act with resolve when confronted by mass atrocities. Congress has historically played an important role in promoting human rights and democracy in Burma – and it is time for us to step up again and provide leadership to support a successful transition to democracy,” McCain and Cardin jointly added.

The administration doesn’t have to wait for this law to pass. It has already used existing authorities to impose restrictions on one key officer implicated in the abuse and should take this cue from Congress to target other leaders now. The world has come to realize that the Burmese government – and in particular its military – are in a state of outright obstruction with respect to international calls to address the crimes committed in Rakhine State and will not take steps to address the past atrocities unless real world consequences make it impossible for them not to.

“The Committee’s action today demonstrates to the world, and in particular to the Burmese military, that the U.S. will not ignore these atrocities. We encourage our colleagues in the Senate to help us enact this important measure into law,” the Senators concluded.

Over 150 villagers forced to flee after fighting in Kutkai