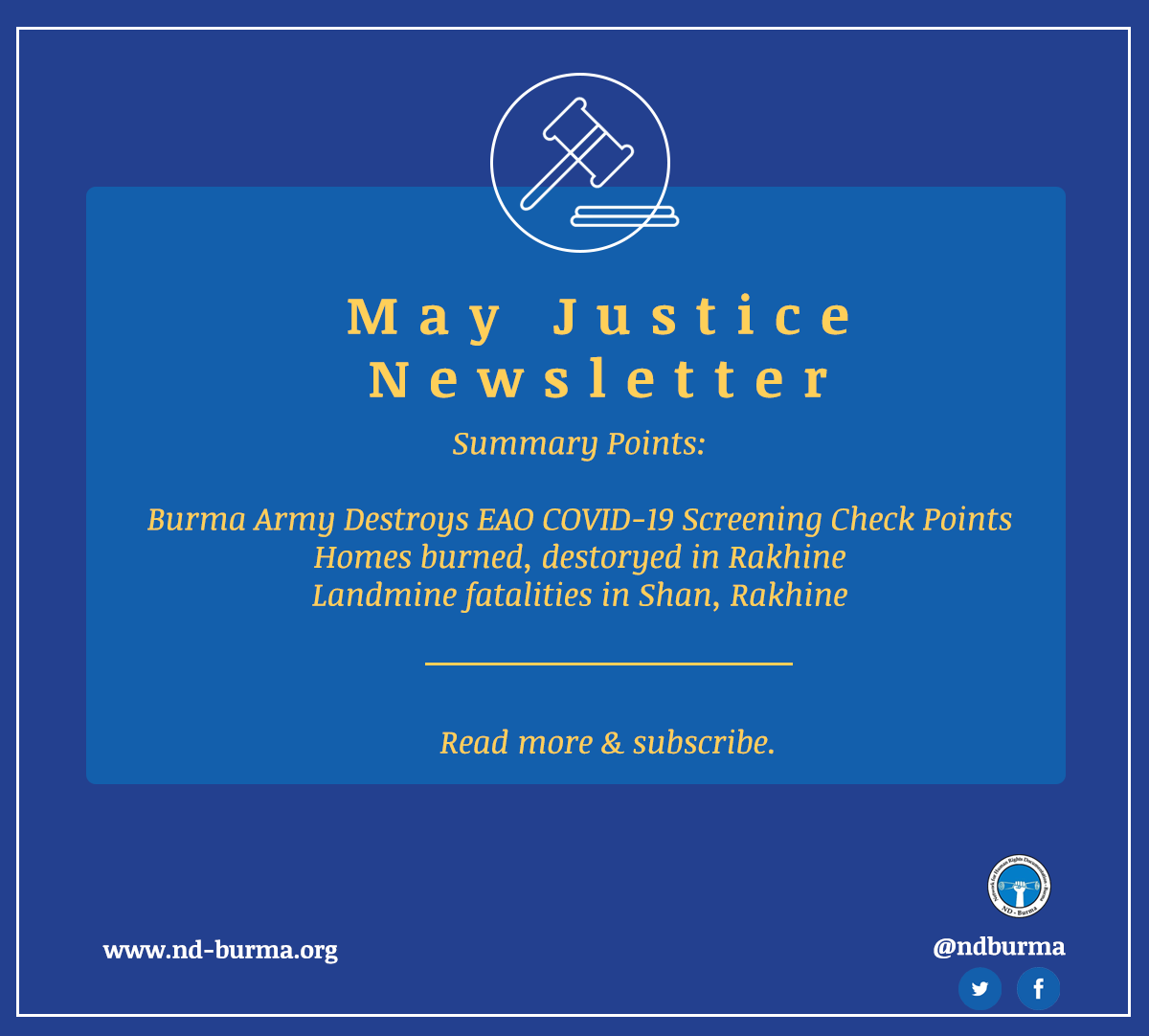 On March 11 2020, the World Health Organization declared COVID-19 a global pandemic. With 232 confirmed cases of COVID-19 in Burma, response efforts have been slowed and interrupted by the Burma Army – who continue to ignore calls for a nationwide ceasefire to properly respond to the pandemic. While the Army declared a unilateral ceasefire from 10 May to 31 August, the agreement notably does not include Rakhine State, where conflict is rampant and threatening civilian security daily. In response, the Ta’ang National Liberation Army (TNLA), the Arakan Army (AA) and the Myanmar National Democratic Alliance Army (MNDAA) issued a joint statement expressing dissatisfaction that the ceasefire did not include Rakhine. Ethnic armed organizations and civil society have been vocal in their calls for collective efforts to combat the virus. The exclusion of armed groups, especially in areas of heavy conflict, to ceasefire agreements, fails to show any kind of genuine commitment to the prevention of further spread of COVID-19. Meanwhile, just days after announcing the ceasefire, the Burma Army attacked the TNLA in northern Shan State. The Burma Army also burnt several KNU COVID-19 screening posts and pressured the New Mon State Party (MNSP) to withdraw their COVID-19 screening point. The United Nations Security Council European member states and Britain, denounced violence continuing to escalate in Rakhine – especially over concern of the pandemic spreading in conflict areas. ND-Burma affiliate member, Progressive Voice, observed the lack of sincerity behind the Burma Army’s announcement of a unilateral ceasefire as conflict remains present despite rising concerns over the pandemic.

Meanwhile, unethical investment continues in the country.  Burma Campaign UK included 31 new companies on their updated ‘Dirty List’ on businesses tied to the Burma military. These stakeholders must be held accountable for contributing to profits tied to a corrupt army committing human rights violations. Additionally, the Burma Environmental Working Group (BEWG) issued a statement demanding that the Burmese military end its ongoing offensives across the country and halt the seizure of farmland.

Calls for justice have not gone unnoticed. As the Burma Army leverages its authority to infringe further on human rights by taking advantage of the emergency decrees, activists are continuing to amplify their calls for accountability.  As penned in the Bangkok Post by Nicholas Koumjian, head of International Investigative Mechanism for Myanmar, he writes, “our investigations are open and the virus will not blind us to ongoing crimes.”

On 23 May, the Burmese government delivered its first report to the International Court of Justice (ICJ) on their efforts since the verdict in January on what steps they have taken to protect the Rohingya from further persecution. A short summary of violations by the Burmese Rohingya Organization UK detailed abuses since the provisional orders were given. An important webinar was also held by the Global Justice Center with four distinguished female panelists discussing whether or not Burma was indeed protecting the Rohingya from genocide.

As of April 30, the total number of those displaced had reached 164,211 people in Rakhine State, according to a statement issued by the Rakhine Ethnic Congress (REC). The statement noted that out of the 164,211 IDPs, 101,670 were staying outside of camps, whereas 62,541 people were staying in displacement camps.

Members of Parliament are calling for more support for displaced villagers who are in urgent need of food, clothes and water in conflict-torn Western Burma. Over 400 people from 120 families are staying at a monastery where locals are providing what they can, but it is not enough.

Two children were killed, and another was injured after an explosion in Buthidaung on 12 May. Burma is a party to the Convention on the Rights of the Child. The Burma government has a responsibility to protect all children impacted by armed conflict. A second incident occurred a few days later when a shell exploded in Paik They village, injuring five civilians.

Families of loved ones who visited their sons after they were tortured in detainment by the Burma Army soldiers said all of them had cuts, black eyes and swelling from the beatings. The men were detained on allegations of having ties to the Arakan Army.

According to locals, nearly 200 homes were set on fire in Lekkar village. A lack of accountability and access for the press to report has only worsened the situation in Western Burma, where conflict is rife and civilians pay the ultimate price.

Several groups condemned the attacks including the Burma Human Rights Network who noted the Burma Army’s continued disregard of international law and lives of civilians. Human Rights Watch also called for an investigation into the fire, citing satellite imagery showing the burnt homes and other structures.

An artillery shell hit a home in Paletwa township and injured the property, no civilians were struck. The attacks in Chin are ongoing with regular deployments as locals remain unprotected amid a pandemic and an increasingly deteriorating human rights situation.

Villager Killed by Landmine Explosion | 29 May 2020

A young villager was killed by a landmine while collecting tree logs for producing timbers near a mountain range. The young man was 25 years old and had a wife and two young daughters.

On 10 May, 2020, U San Shwe (40) and Mai Naing San Aung (16) were injured by a landmine explosion while they went from Namkham township to Bamaw township by motorbike. They lived in Sel Lone village, Namkham township, Muse District.

Currently, they are being treated in Namkham Hospital. U San Shwe San was wounded in his leg and Mai Naing San Aung was wounded in his leg and arm. According to the mine victims, they asked the villagers to go to Bamaw township and they showed them the old way to go there. They also met with the Tatmadaw and asked if they could travel the way they were heading and were told ‘if you are important you can go but if something happens we will not take responsibility.’ After, they walked for 30 miles before they were struck by a landmine. The victims had been traveling to find work to afford further education.

Two other villagers were traveling back one morning when they saw two more dead bodies killed from landmines.

On 18 May 2020, two women (Daw Aye Yin, 60 and Daw Aye Htwe, 58) who lived in Bha Lain village, Chaung Chalk village tract, Kyaukme township, northern Shan State were brutally killed by an unknown perpetrator while working on the tea farm they were living on.

The police in Kyaukme township arrived and filed the case at the police station and are continuing with an investigation into their murder. The injuries sustained by Daw Aye Yinn included a wound in her ear right side, eye right side, and incisions to the back and sides of her head. Daw Aye Htwe also had similar wounds on the back and left side of her head.

Kyaukme is located in a ‘black zone’ as it is an active area of conflict between armed groups including the TNLA, RCSS/SSA, SSPP/SSA and Tatmadaw. Ta’ang rights groups including TSYU and ND-Burma member, the Ta’ang Women’s Organization are demanding justice for the families of two murdered women who were killed on a tea plantation last week. The authorities must ensure a transparent investigation and that the perpetrator is held accountable.

World Press Freedom Day was recognized on 3 May. Burma ranks 139 out of 180 countries on the World Press Freedom Index. Misinformation has unfortunately fueled many of the ethnic conflicts across the country, while journalists are threatened or imprisoned for reporting the truth at the expense of government critique. Notably, on 2020 March, Internet Service Providers in Burma received instructions from the Ministry of Transport and Communications to block 230 websites. There were 67 on this list that were accused of spreading misinformation, which reported critically on the activities of the government and military. The list of the websites has not yet been publicly released.

Freedom of expression organization, Athan, released a set of graphics on key findings of declining state of freedoms in Burma after four years of the NLD government including 539 lawsuits against 1051 individuals.

The CPJ Calls for Release of Editor

In a statement released earlier this week, the Committee to Protect Journalists called for terrorism charges against editor of Narinjara, Khaing Mrat Kyaw, to be dropped immediately. The Editor has been in hiding to avoid charges in yet another example of attacks on journalists and the free press.

The fears IDPs have across Burma over COVID-19 have been compounded by limitations to access and information. These information gaps are making it more difficult for displaced civilians to protect themselves and their families.

Editor of the online news agency Dae Pyaw, Zaw Ye Htet, was arrested and sentenced under section 505(b) to two years in jail for incorrectly reporting a death of COVID-19.

IDPs in the Kachin town of Namti who were relocated in response to COVID-19 are in need of food, water, electricity and toilets. No organizations or aid groups have visited the camps as anxiety is heightened by insecurities over livelihoods, education and health.

Travel restrictions in conflict torn western Burma has escalated fears of Chin farmers who say they are afraid to go to work on their farms because of COVID-19 and clashes.

Several EAOs, CBOs and local governments have taken significant steps to prevent the spread of COVID-19 in their areas.

Karen State: The Karen National Union (KNU) has formed a prevention committee that has been providing awareness materials, in addition to setting up quarantine centers. The KNU has nine virus testing checkpoints.

The Karen Women’s Organization also released a short report on their response efforts in Karen State which includes visits to approximately 2000 families and has made masks distributed to 5000 people, combined with awareness raising activities.

ND-Burma member, the Human Rights Foundation of Monland is working to support communities, civil society, and social service providers in remote areas in IDP sites in Mon State through emergency relief in response to COVID19

International Crisis Group released a briefing on ‘Conflict, Health Cooperation and COVID-19 in Myanmar’ to discuss what is new, why it matters and what needs to be done. Read the briefer in English here.

The video can be accessed here in both Burmese and English, and the press release can be viewed on their website.