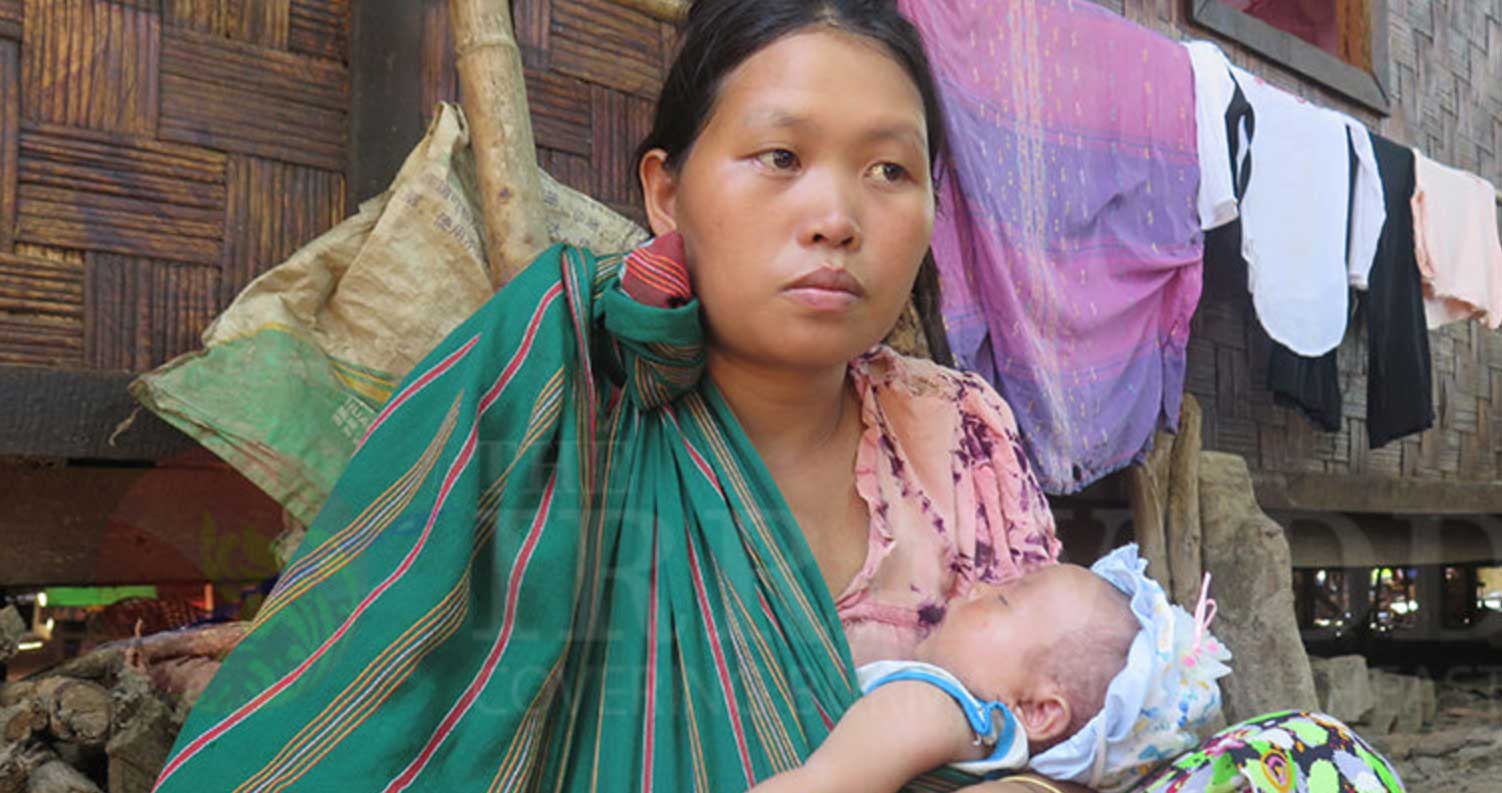 She came to attend a military court hearing and to seek justice for her late husband who was killed before she gave birth to their last child, who is now three months old.

In 2014, Magyi Khon Nang fled clashes between the Tatmadaw and Kachin Independence Army (KIA) along with her husband Labya Naw Hkum from their village Kaung Kha in Mansi Township, to a camp for displaced persons in Mai Hkaung Village.

On May 25 this year, Labya Naw Hkum left home to work as a day laborer as usual. But he never came back. He was one of three displaced civilians arrested, killed and buried in the jungle by a column of LIB 319 soldiers on their way home.

Six soldiers are thought to be responsible for the killings. Magyi Khon Nang was at LIB 319, at the company’s invitation, to attend the trial at a military court for the case.

“I want justice. To recompense for my loss and sorrow, I wish [the soldiers responsible] to be handed life imprisonment,” said Magyi Khon Nang as she went red in the face.

Soothing the whimpering baby in her hands the mother of three said: “I was eight months pregnant when her father died. I had difficulties to go to the hospital and had to give birth at my home,” she said.

“That day, [my husband] said he would do some casual jobs. I remember that he was wearing a shirt with a ‘peace’ logo given by the camp, and carrying a bag made from a rice bag given by the World Food Program (WFP). He told the children that he would find money and come back home in the evening,” she recounted.

“My three kids don’t have anyone to call ‘Dad’ as their Dad is dead now,” she said, wiping away the tears.

Labya Naw Hkum, 27, together with friends Nhkum Gam Aung, 31 and Maram Brang Seng, 22 went to work as day laborers to carry logs at Hkapra Yang, some five miles from the camp in Mai Hkaung Village.

On their way back home, they were killed and buried in the jungle, some four miles from Mai Hkaung Village by a column of LIB 319 soldiers on patrol.

Laphai Nan Ban, mother of Maran Brang Seng, said: “He got the job to carry logs. Sometimes he got 5,000 kyats a day, and sometimes 10,000 kyats. He gave the money to us, which we used on food and healthcare.”

WFP has been providing foods to displaced persons’ camps in Kachin State for years, but since the end of 2016, it has reduced food rations.

In Mai Hkaung Camp where Laphai Nan Ban and Magyi Khon Nang are sheltering, a person only gets some 10 kilograms of rice, oil and 2,500 kyats (less than US$2) for a whole month, which has forced the men to do casual jobs to cover household expenses.

Maram Roi Ja, wife of Nhkum Gam Aung, said: “He was the only breadwinner in my family. Now I am the one left to support our family. I am very depressed. I can’t do anything.”

Both Maran Brang Seng and Nhkum Gam Aung are survived by their two-year-old children.

“Witnesses told us that a military column arrested and killed our husbands. Then we looked for their bodies together with community elders. We found them on May 28,” said Wahgyi Seng Mai, wife of Maram Brang Seng.

“My son’s body was carried on a truck to the cemetery in the evening [after it was uncovered]. I was so sad and I didn’t care about the rotten smell or the feeling of nausea. Others were covering their noses with their hands and tried to move away, but I didn’t want to,” said Maran Brang Seng’s mother Laphai Nan Ban.

“I wanted to go near him and hug him but they did not allow me to go near him. I could see him clearly. His face was decomposing and some parts of it were torn apart.”

Her son was the only breadwinner in her five-member family, and she had no idea what to do to survive, she said.

Camp organizers and community elders then sent the bodies to Mansi Hospital and filed a complaint with Mansi Township police station along with autopsy results.

According to autopsy results, the three had sustained gunshots, knife wounds, skull fractures, and bursting eyes.

On May 30, the Office of the Commander-in-Chief released a statement that an investigation would be carried out into their deaths. The LIB also made an internal investigation.

Six soldiers, including a battalion commander and three captains, have been charged with the murder.

Three captains, a lance corporal and a private are charged with several provisions of the military act equivalent to the charges of murder, aiding and abetting, and ordering murder in the Penal Code.

The commander is charged with murder and making a false report.

The military court heard testimony from camp organizers of Mai Hkaung, the village administrator of Mai Hkaung village and police of Mansi Township before hearing from the soldiers.

LIB 319 on Sept. 15 invited the families of victims, Kachin civil society organizations and reporters to attend the court hearing. The Irrawaddy attended on Sept. 18.

Three colonels were acting as judges at the military court, and the accused soldiers took oath that they would testify the truth.

According to their testimony, they met and arrested La Nan who was carrying illicit drugs and around 4 million kyats with him before they encountered three civilians who they also arrested.

One of the captains later released La Nan for fear that seeing a drug pusher together with their column would give rise to misunderstanding. The private was ordered to guard the three arrested civilians. One of them died due to unintentional discharge, according to the testimony.

La Nan informed the victims’ families about their arrest after he was released, otherwise their bodies could not have been retrieved, said Laphai Nan Ban.

“Because of La Nan, we came to know that my son was killed by soldiers. Otherwise, there won’t be any evidence and we’d not have known where they were buried,” she said.

La Nan did not appear at the court for testimony, however, since no one knows where he lives.

Captains testified that they informed the death of a civilian to the commander by phone, and the commander implied killing all three of them because the area is supposed to be a prohibited area for civilians.

“It is no man’s land, no man’s land area. Kill all three. If you are clever enough, you can even shift the blame,” the commander was quoted as saying by the captains.

The commander instructed them to bury the bodies carefully in order to avoid people discovering them, testified the captains. And the commander also falsely reported to the senior officers that the three were accidentally shot as they attempted to grab the guns.

The military court heard the case in one day from 9 a.m. to 5 p.m. except for lunch and short breaks. During the lunch break, some soldiers were babysitting the baby girl of Magyi Khon Nang.

A military officer of LIB 319 told The Irrawaddy: “They [soldiers] have got their salaries cut since the trial begun.”
This was the first time officials of Kachin Baptist Convention (KBC), which is helping displaced persons in Kachin State, local Kachin civil society organizations (CSOs) and media were allowed to attend a military trial over the deaths of Kachin civilians since renewed clashes broke out in Kachin State over six years ago.

Victims’ families and Kachin CSOs, however, doubt if fitting penalties will be imposed on the perpetrators.

“So far we’re satisfied with the court hearing. But we’ll have to wait and see what the final verdict will be,” said La Ja of KBC.

Officials of LIB 319 have reported the testimonies to the upper level, and are waiting for the verdict.

Service personnel—either the rank and file or officers—automatically become civilians if they are jailed more than one year, he said.

The widows of the three slain civilians said they feel like their life is now hopeless, having to assume the responsibility to raise their children alone.

“If they are to be punished, they deserve it because they killed our husbands. But, for me and my children, we’ve lost our whole life. We can get nothing back,” said Magyi Khon Nang.