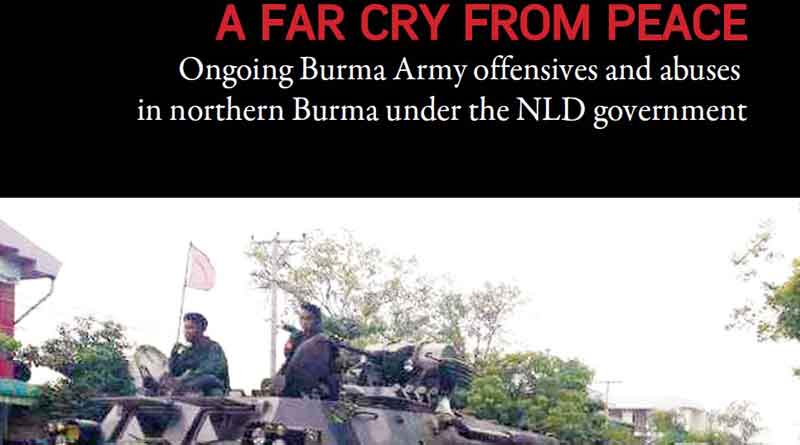 A new report by the Kachin Women’s Association Thailand (KWAT) documents ongoing, widespread Burma Army abuses in Kachin areas of northern Burma over the past year, since the National League for Democracy (NLD) was voted into power.

“A far cry from peace” describes ongoing practices of arbitrary arrest, torture and extrajudicial killing of civilians across Kachin and northern Shan State, amid intensified military offensives against the Kachin Independence Army (KIA). In the twenty-one torture cases documented – involving at least nine Burma Army battalions — villagers were tied up, blindfolded, kicked, hit with guns, had bamboo rolled on their shins, and were stabbed with knives. Six men and two women have also been killed or disappeared.

Large groups of villagers have been arbitrarily detained, homes deliberately set on fire, and shells fired indiscriminately into civilian areas, causing death and injury of children, and leading to fresh displacement.

KWAT highlights how the Burma Army continues to block justice in cases of past military sexual violence, including the rape-murder of the two Kachin teachers and the sexual assault of a 73-year-old Kachin widow last year.

“The patterns of Burma Army abuse and impunity are the same as under the previous government, and the fighting is even worse,” said KWAT spokesperson Moon Nay Li. “The NLD’s peace rhetoric is a far cry from the reality in northern Burma.”

KWAT is calling urgently for the NLD government to pressure the Burma Army to end offensives throughout the country so that inclusive political dialogue can begin, and to lift restrictions on humanitarian access to the over 100,000 IDPs sheltering in the north of the country.

KWAT is also urging the international community to end all military to military engagement with the Burma Army, and ensure that peace funding is not skewed in favor of the government.

The full report can be viewed on www.kachinwomen.com