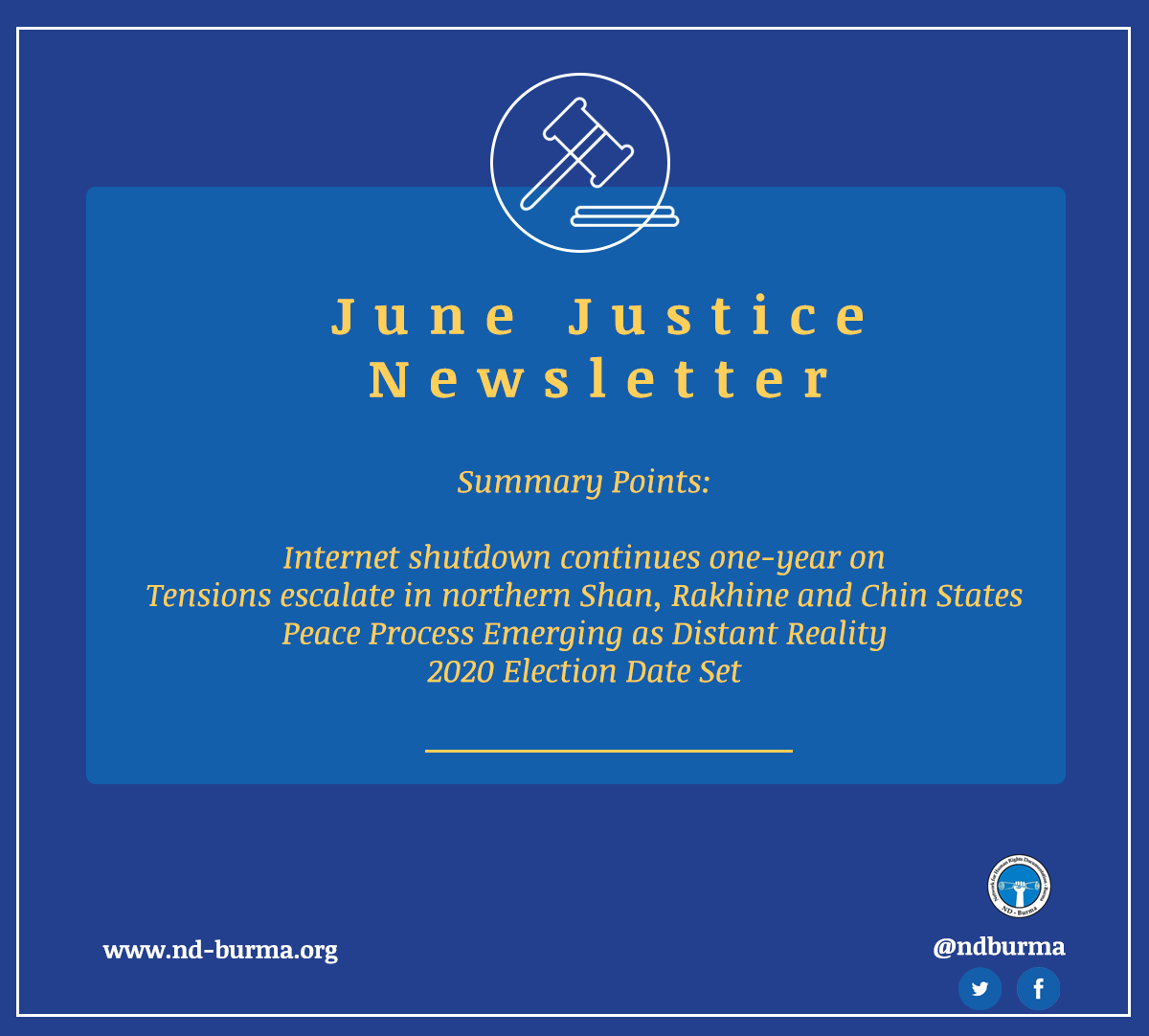 Conflict Continues Amid the Pandemic, Fueling Insecurity and Unrest in Burma

COVID-19 has continued to further expose the quickly deteriorating human rights situation in Burma. The escalation of fighting amid the pandemic has allowed more violations to take place with impunity. This month, conflict escalated in Rakhine State as several human rights groups released documentation on the extent of the alleged abuses, calling for immediate lifts on restrictions to humanitarian aid. Frontline volunteers have also spoken out, saying gaps remain in COVID-19 response and are appealing to the National League for Democracy government to provide safety equipment and training to those supporting the relief effort. Perhaps even more concerning are those who have been detained for attempting to transport food to IDPs as was the case for 12 individuals who appeared in court in Mrauk-U on 23 June. The need for food and materials has been compromised, particularly in Rakhine and Chin by fighting, where the Burma Army has blocked land and water food supply lines. Challenges remain and are fueling insecurities in communities.

At the beginning of the month, the Ta’ang National Liberation Army (TNLA), the Myanmar National Democratic Alliance Army and the Arakan Army released a statement with an offer to extend a bilateral ceasefire with the Burma Army to advance further peace negotiations. In response, the President’s Office spokesperson said the government would be continuing their operations in Rakhine, justifying it on the basis that the recently branded ‘terrorist organization’, the Arakan Army, is committing extremist acts. Meanwhile, the peace process has emerged as a distant prospect for reconciliation, especially as political parties focus their energy on the upcoming November election. In a piece from Frontier Myanmar, Sithu Aung Myint, writes that genuine peace in Burma is truly only possible if all stakeholders (namely the government, EAOs and Burma Army) are willing to negotiate and make compromises.

This month, the United Nations Human Rights Council adopted a resolution on human rights in Burma. The country has been told to grant ‘full and unhindered access’ to diplomats, independent observers and the media. Burma rejected the draft resolution, which though unsurprising sets a worrying tone for the future of the country’s affairs.

Out of fear of arrest by the Burma Army, over 50 village and ward administrators in Myebon township quit after three colleagues were detained on terrorism charges. COVID-19 has also exacerbated fears further with government soldiers increasing seizures and arrests, and expanding operations.

A 7th grade student was one of the victims injured by shelling during clashes between the Burma Army and the Arakan Army. Another woman in her 90s was killed. Fighting continues in Western Burma despite ceasefire calls.

Over 10,000 people were forced to leave their homes so the Burma Army could advance their operations against the Arakan Army. Those forced to flee were from 17 communities living in Kyauktan village. Over 160 000 civilians have been displaced across the 18-month civil war.

Following this order, the embassies of Australia, Canada, the US and UK governments expressed concern over the clearance operations writing that the ‘protection of civilians, their property and livelihoods by all parties must be prioritized.’ The United Nations also articulated worry about the humanitarian impact of conflict in Rakhine and Southern Chin States calling on ‘all parties to respect international humanitarian law.’

A civilian living in an IDP camp near the town of Rathedaung was shot in both legs during fighting between the Burma Army and Arakan Army.

Chin villagers have been forced to flee heavy fighting between the Burma Army and the Arakan Army. A bombing in Paletwa wounded 12 and killed 9. The devastating loss of life continues to take place without accountability.

Farmers in southern Shan likely face trial as the Burma Army refuses to drop trespassing charges against them over a land dispute. Over 200 civil society organizations accused the Burma Army of confiscating and destroying local land. Land confiscation amid COVID-19 has been a reoccurring instance in Shan State, as well as in Rakhine.

While there are no reported casualties, fighting between the Restoration Council of Shan State and the Burma Army broke out in Hsipaw, where farmers are concerned that their harvest before monsoon will be delayed because of ongoing clashes.

Shan human rights groups are still waiting for justice in remembrance of the 56 villagers massacred by the Burma Army, 23-years ago in Kunhing township. The lost lives marked the largest single-day killing during the clearance operations in Shan State between 1996-98.

When fighting slowed in Kutkai, Shan State, IDPs worked on rotational farms. The recent escalation in clashes now has them trapped in the middle of a conflict zone where fears from their families has been heightened by a lack of information about their safety.

Tensions in Shan State have been increasing  as the Burma Army and Kachin Independence Army (KIA) have clashed for four days straight in Kutkai township, northern Shan. Fighting is taking place despite the Burma Army issuing a unilateral ceasefire from 10 May to the end of August. The KIA has not signed the Nationwide Ceasefire Agreement.

Indiscriminate shelling by the Burma Army in Pankyan village in northern Shan killed a man and injured a woman. Burma Army deployments in eastern Shan are also threatening the safety and security of IDPs along the Thai border as over 800 troops entered the area in June as military tensions increase with the Restoration Council of Shan State.

Two civilians were wounded in Wah Klo Htar village when the Burma Army indiscriminately shelled into villages in Mutraw district. The father and daughter who were struck were immediately rushed to the hospital and discharged with non-life-threatening injuries. According to the Karen National Union, the Burma Army has increased their military operations in border areas and displaced civilians.

Documentation by Free Burma Rangers revealed human rights abuses by the Burma Army including shelling and killing of activist, Saw They Mi. Their operations also forcibly displaced over 100 villagers.

Statement by the Karen National Union (KNU) alleges the Burma Army took advantage of the Nationwide Ceasefire Agreement by doubling the number of troops in Karen State in Brigades 5 and 7. Under the agreement signed in 2012 between the KNU and the Burma Army, troop movements must be in consultation with the two parties. Civilians have been forcibly displaced as a result.

The Karen Peace Support Network released a short report on the destruction of COVID-19 checkpoints, which detailed the Burma Army’s new offensive in Mutraw District.

In marking the International Day for the Elimination of Sexual Violence in Conflict, Karen Human Rights Group called on the Burma government and Army to investigate past sexual abuses across Burma and ensure that those responsible are held accountable without giving any excuses.

On the nine-year anniversary of armed conflict resuming in Kachin State, the Joint Strategy Team called for humanitarian needs to be met in northern Burma. To date, the war has displaced over 120 000 civilians over 170 camps across Kachin and northern Shan State. ND-Burma member, the Kachin Women’s Association Thailand joined the call.

Then, just after the nine-year marking of renewed fighting, the Burma Army and Kachin Independence Army clashed in northern Shan State. Civilians expressed fear and concern over the escalating fighting, stating that they ‘not dare go outside their homes.’

IDPs in Laiza, Kachin State have also called for aid to repair broken shelters as a result of heavy rains and strong winds.

Freedom of expression also continued to decline, leading the United Nations High Commissioner for Human Rights, Michelle Bachelet to speak out against censorship amid COVID-19. She called for the stop of misinformation or else the credibility of institutions will only be weakened further.

Peacock Generation street performers were sentenced with additional charges for their satirical performance about the Burma Army. The sentencing speaks volumes to the decline of freedom of expression in the country and rising censorship.

Arakanese political parties, civil society organizations and the media addressed Burma’s democratic transition in their letter expressing concern over the Internet shutdown in Rakhine and Chin where approximately 800,000 people have been impacted.

In February 2020, the Ministry of Transport and Communications announced they were imposing an information shutdown in five townships in conflict torn Rakhine and Chin States. The reinstatement followed previous restrictions on mobile Internet in nine townships nearly one year ago on 21 June 2019. The decision immediately came under fire by international human rights watchdogs including Human Rights Watch, Fortify Rights and independent experts appointed by the Human Rights Council.

Over a year later, activists continue to call for the lift of the world’s longest Internet shutdown. The government has given no indication of resuming access to the thousands of civilians impacted by the shutdown, despite the vital need for information especially in the wake of the COVID-19 pandemic which has so far claimed the lives of six individuals and infected nearly 300. Six activists were charged by the Burma police for protesting the Internet ban, and have been taken into custody for hanging posters in Yangon on 21 June. The banner called into question the integrity of the Internet ban, suggesting it as a coverup to possible atrocities.

It is also worth noting that the number of clashes has doubled after Internet shutdown.

AASYC Submission to the UN Universal Periodic Review (UPR) to the 37th Session...
Scroll to top