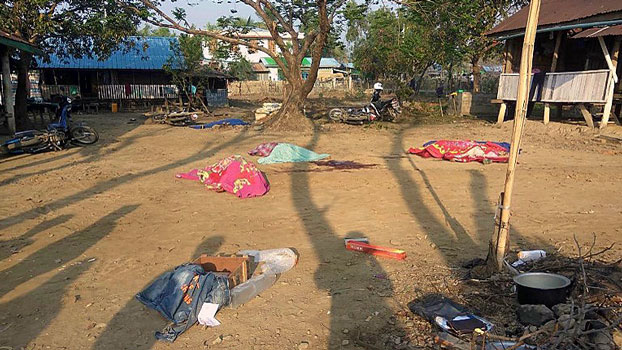 Clashes between the Arakan Army (AA) and the Burma Army in Rakhine and Chin states continued following the escalation of conflict between the two in the last quarter of 2018. Skirmishes persisted throughout March, including one armed clash in Paletwa Township, Chin State, that killed at least 12 Burma Army soldiers. An AA attack on a police outpost in Ponnagyun Township, Rakhine State, left nine police officers dead and two others injured.

Fighting between the two continued in Ponnagyun Township, with the Burma Army conducting aerial bombardments and artillery attacks, leading to the displacement of a number of nearby villages. In addition, the Burma Army indiscriminately opened fire into the town of Mrauk-U in Rakhine State, injuring seven women and children, followed by the displacement of thousands of villagers who fled after door-to-door searches for AA soldiers and shooting incidents left them fearful for their lives.

Despite the declaration of a four-month unilateral ceasefire by the Burma Army in the north and northeast of the country in December, clashes continued to erupt in Kachin and Shan states. Five-hundred villagers were displaced after Burma Army airstrikes on a Shan State Progress Party/Shan State Army (SSPP/SSA) camp, and another 200 were displaced after government forces clashed with SSPP/SSA and Ta’ang National Liberation Army soldiers in Namtu Township. According to a government spokesperson, eight ethnic armed groups, not party to the National Ceasefire Agreement (NCA), and the government’s peace team signed a five-point agreement, which included an agreement to meet at least every two months.

The Peace Process Steering Team, which is composed of 10 NCA signatories, met in early March to discuss key issues in the current peace process and a timeframe for the recontinuation of talks after they were suspended in October over disagreements concerning the concepts of “single army” and “non-secession from the Union”, agreeing to meet again in May.

The UN Human Rights Council adopted a resolution on the situation of human rights in Burma at its 40th regular session. The Council expressed serious and grave concerns over ongoing reports of gender-based and sexual violence against women and children in Rakhine, Kachin, and Shan states, as well as the ongoing violence and displacement in conflict zones. The Special Rapporteur on the situation of human rights in Myanmar’s mandate was extended for another year, and the Burma Government was called upon to resume without delay its cooperation.

The resolution also calls for the rapid implementation of the ongoing independent mechanism to collect and preserve evidence of the most serious crimes and violations of international law committed in Burma since 2011, in order to hold perpetrators accountable for their crimes at national, regional or international courts or tribunals, that have or may have jurisdiction in the future, in accordance with international law.

A military court was established to investigate the Burma Army’s conduct during its crackdown on the Rohingya population in Rakhine State, which displaced more than 700,000 people in late 2017. The court is composed of a major-general and two colonels who will conduct the investigation. The statement by Senior General Min Aung Hlaing’s office was widely met with criticism and derision online.

In a controversial move, Bangladesh announced its plans to start relocating thousands of Rohingya refugees to a remote island beginning in April. The island is considered prone to flooding during extreme weather events, and some have warned this could create a “new crisis” for the Rohingya.

The Burma Army released 32 children and young people who had been recruited under the age of 18 to serve in the armed forces, the first such release of child soldiers in 2019. In addition to the Burma Army, a number of Ethnic Armed Organizations (EAOs) in Burma have also been identified by the UN Secretary General as “persistent perpetrators” in the recruitment of children for use as soldiers.

Aye Maung, a prominent Rakhine leader, and author Wai Hin Aung were both sentenced to 20 years in jail for treason, following their arrests in January of 2018. Both had given speeches allegedly criticizing the Bamar-dominated government and its treatment of Rakhine people.

The Supreme Court of the Union heard an appeal submitted by the lawyers of jailed Reuters journalists Wa Lone and Kyaw Soe Oo. The 26-page appeal included evidence that the pair had been framed by police, as well as international precedent where sentences in similar cases had been reversed.

The deadline for the registration of ancestral lands under the Vacant, Fallow, and Virgin Land Management Law was passed on March 11th, leading to calls by prominent human rights groups to halt the implementation of the law in view of the potentially devastating negative impact it may have on individuals and communities.