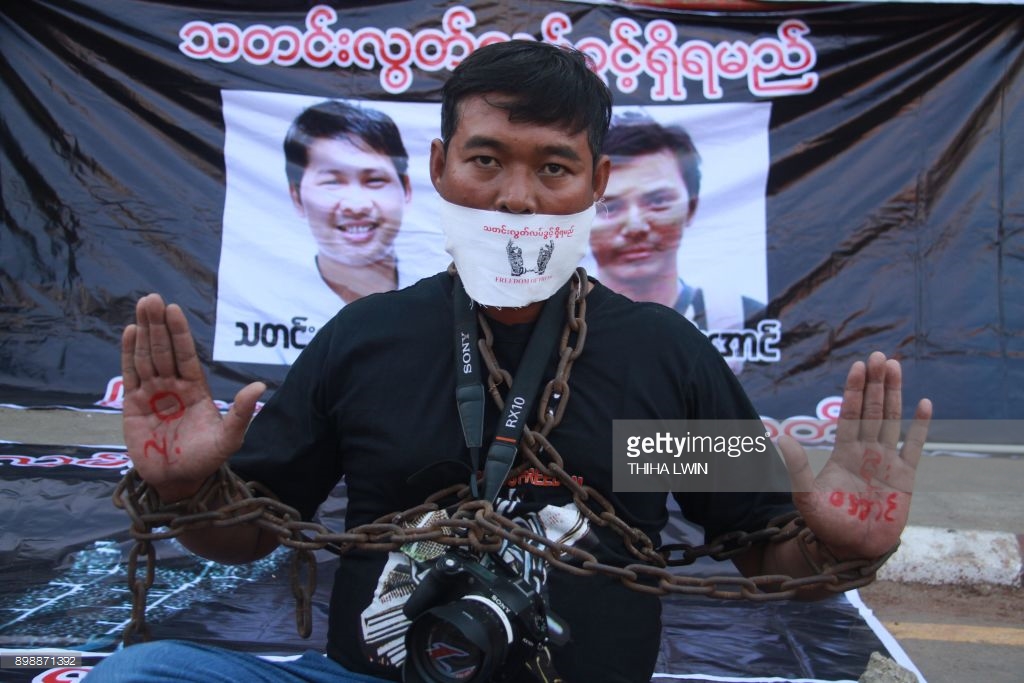 This post is part of Tea Circle’s “2018 Year in Review” series, which looks back at developments in different fields over the last year.

In March 2018, a new museum opened in Rangoon. It does not boast any artworks or ancient artefacts, but hundreds of pictures documenting the extent of state violence committed against Burmese citizens since the military seized power half a century ago.

Grainy black and white shots depict officers beating up students protesting against Ne Win’s coup in 1962, before moving to the savage repression of democracy activists in 1988 and the torture of those who defended the electoral victory of the National League for Democracy in 1990. By the time we reach the 2007 Saffron Revolution, the Burmese state’s brutality is displayed in technicolour.

The museum is run by the Assistance Association for Political Prisoners (AAPP), a member of ND-Burma, a local organisation documenting human rights abuses in the country.

The mere fact that the museum is permitted to operate shows that Burma is freer than it used to be. Before 2011, when General Thein Sein initiated a series of reforms, anyone caught documenting or disseminating information about government ruthlessness would have faced certain arrest, perhaps torture and possibly death.

The rest of the museum, however, shows how fragile Burmese democracy still is. Among the pictures of current political prisoners are Wa Lone and Kyaw Soe Oo, two Reuters reporters arrested last December while researching allegations of grave human rights violations in Rakhine State. They are awaiting their trial in the notorious Insein prison, where thousands deemed enemies of the state have served time.

As employees of an international media organisation with a public campaign behind them, Wa Lone and Kyaw Soe Oo will probably not be tortured. But torture continues to be used by state security forces, especially against ethnic nationality civilians.

Lahpai Gam, a Kachin farmer in his 50’s who was released as part of a New Year’s amnesty in April after serving nearly six years in jail, continues to suffer health problems after he was beaten by government soldiers, burned with knives, waterboarded, and forced to have sex with another man.

Sadly, his case is not unique. ND-Burma and its member organisations regularly document state violence against ethnic nationality civilians accused of supporting insurgent groups. No evidence is required and providing a bag of rice is considered reason enough to charge someone under Article 17(1) of the Unlawful Association Act – a piece of legislation routinely used to imprison ethnic nationality civilians. On 30 October, a 14-year old boy became the youngest person to be jailedunder this law after being forced to face a judge without legal representation or an interpreter to translate the hearing into his native Ta’ang tongue. Three journalists attending a drug burning ceremony hosted by an ethnic armed group were also hit with 17(1) and detained for three monthsbefore being released without explanation or apology.

No peace without justice

There continues to be near-total impunity for human rights violations. The majority of victims do not try to pursue justice for fear of retribution, absence of funds, or lack of trust in the legal system. ND-Burma’s 2017 documentation shows that when victims try to seek justice, the military uses a variety of methods to obstruct cases. This includes providing meagre amounts of compensation, which many survivors feel compelled to accept in the face of poverty and absence of the rule of law. In other cases, the military bamboozles victims into dropping cases by making them sign long documents, hidden in which are statements absolving soldiers of wrongdoing.

On a few occasions, the military has admitted it was in the wrong. Seven low-ranking soldiers were found guilty of murdering Muslim men in Rakhine State – a crime the Reuters journalists were investigating when they were jailed. At the beginning of 2018, six soldiers were sentenced to ten years in jail for killing Kachin civilians.

However, the army admits its faults on its own terms. Trials of soldiers are almost always heard in secret military courts and one must usually trust the army’s word that justice has been served. Burmese state TV reported that the soldiers responsible for the murders in Rakhine State were released as part of the New Year’s amnesty. The government quickly denied the reports, but the lack of transparency in the military justice system means the men may indeed have been released.

Furthermore, military courts do not provide redress to victims, nor remedy to ensure the violations do not recur. Nobody knows why the handful of cases that have been brought to court have been selected and the majority of human rights violations continue to go unpunished. Senior military figures remain untouchable.

Instead, the legal system continues to be used to suppress freedom of expression. The past year has seen MPs move to tighten the Peaceful Assembly and Peaceful Procession Law. Parliament also failed to reform section 66(d) of the Telecommunication law which criminalises defamation and protects the powerful – research showed the majority of complainants to be government officials.

Decades of misuse of the justice system have left a mark on Burmese society. A recent survey showed that a majority of the public sees laws as a way to control society as opposed to protecting individual rights.

In such conditions, the government’s much touted objectives of rule of law and peace remain a distant prospect.

Victims of human rights violations often tell ND-Burma that it is not the perpetrators they hate, but the system that has made abuses possible. A former political prisoner who spent a total of 14 years in jail for his activism and was interviewed for an upcoming ND-Burma report told us that: “perpetrators also committed these crimes so they could survive.”

Structural change is what ND-Burma has been working towards since we started documenting human rights abuses 14 years ago. We believe that only through acknowledgement and redress can Burma build a state that guards against human rights violations. Daw Aung San Suu Kyi’s attempt to leapfrog the democratic transition and ignore the past has failed. Instead, two years after her government took power, the UN Special Rapporteur on Myanmar describes a country where “the repressive practices of previous military governments are returning as the norm once more.”

The opening of the AAPP museum is as much a sign of progress as a reminder of the government’s inaction. Last year the government said it was planning a permanent museum commemorating the 8888 uprising in Rangoon. Unfortunately, the anniversary of the revolt was met with silence from the government, as was that of the Saffron Revolution.

But as much as words, victims need actions. Former political prisoners lament the lack of support they receive from those who were once their comrades. In the face of government inaction, aid groups are doing their best to try and heal the lasting impact of state violence. International NGO FHI 360 provides a six-month internship programme to former political prisoners, who often face unemployment as a result of social stigma and lack of training. Local organisations continue to operate unofficial clinics providing medical and psychosocial services to victims of human rights violations.

The government has made national reconciliation one of its priorities. Efforts to reconcile armed groups and the army are indeed essential, but reconciling oppressors with victims, and the country with its own past, cannot be neglected.

Veronica Collins is ND-Burma’s Advocacy Manager. Before coming to Burma she worked on human rights issues for the UN in Kosovo and the EU in Brussels. Read more of Veronica’s posts on Twitter @VeronicaInBurma or ND-Burma’s @ndburmaweb