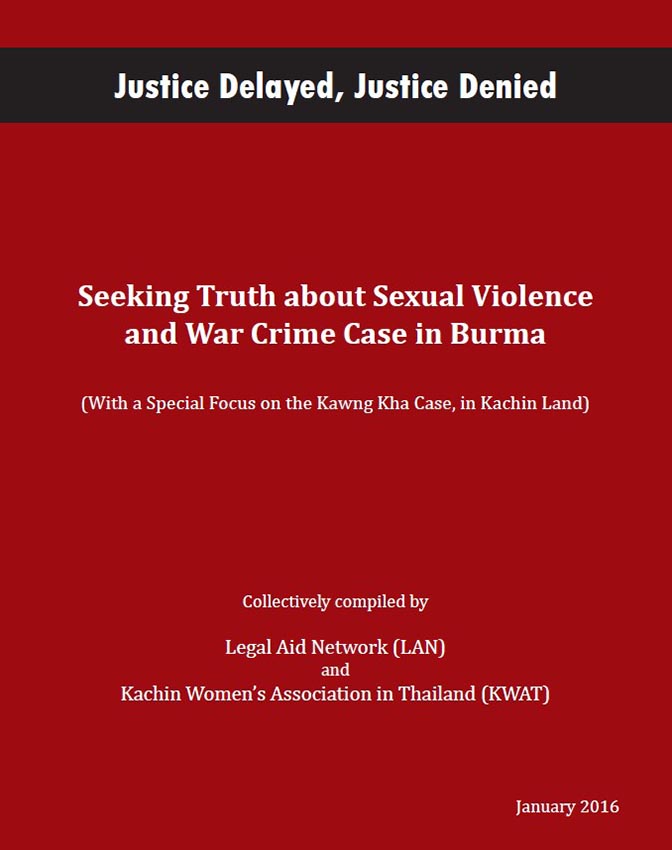 Despite the so-called democratic transition taking place since 2010, Burma remains constitutionally under the control of the Armed Forces. However, our national democratic icon, democratic forces, some ethnic armed organizations, many NGOs — especially GON¬GOs – and most of the international community are siding with or exercising a policy of appeasement with the power holders, without scrutinizing whether the source of their pow¬er emanates from the genuine will of the various ethnic nationalities and/or indigenous peoples.

As a result, terms such as human dignity, human value, and particularly human rights have become empty rhetoric. Accountability is merely a political slogan, used by the incumbent President Thein Sein, the chairperson of the Union Solidarity and Development Party (USDP), since coming to office in 2011, but never implemented by any government institution in practice. The vicious circle of impunity continues, and, for the time being, seeking justice is an unpopular concept, voiced only by victims’ communities.

Against this background, a heinous crime against two young ethnic Kachin female volunteer teachers was committed on January 19, 2015, allegedly by the Myanmar soldiers of the ruling regime. Despite the fact that it has been almost ten months now, the perpetra¬tors are still at large and no suspect has been identified by the police. Investigations carried out by the authorities have not focused on the victims, but have been one-sided, benefitting the perpetrators. The lack of reparative and restorative justice has led to delay and finally a denial of justice. The ominous silence around this case will become a catalyst for recurrence of gross human rights violations in the future.

This preliminary report attempts to uncover the truth about this case, relating it to similar past incidents of war crimes, particularly sexual violence. It is also examined as to whether the state is held accountable for failure to provide protection for such heinous crimes and reparations to the victims, due to official state passivity. The government is also reminded of its obligations under domestic and international law.

As such, among the gross human rights violations inflicted on the various ethnic nationalities over the past decades, the Kawng Kha case constitutes one of the most heinous crime ever committed. Unfortunately, the ruling regime, albeit having the responsibility as the government, has not yet submitted any report specifically on this case to the Committee against Torture and to the Committee on the Elimination of Discrimination Against Wom¬en (CEDAW), which Burma has already acceded to. There are no independent institutions or professionals working with victims of sexual violence nor does there exist any effective law for protection of witnesses in Burma.

In accordance with the 2008 Constitution of Burma, the Myanmar Armed Forces, led by the Commander-in-Chief – not the State President – primarily exercise executive power. In addition to the Police and other security institutions, the Judiciary is also subser¬vient to the executive. This legal and institutional framework has exacerbated the situation of the victims, their families and their communities, whenever the culprits or suspects are army personnel or government authorities. In regard to sexual violence, a serious problem is that ethnic women victims, given social, geographical, financial and legal constraints, are unable even to file complaints; and, even if a complaint is filed, it is commonly rejected by the Judiciary or the local authorities.

This paper explores the status of State Institutions, focusing on the Police Institu¬tion, from the aspect of institutional integrity as well as procedural justice, as underpinned by not only national laws, international human rights laws and humanitarian law, but also the Rule of Law. This paper also establishes the nexus between civil war and human rights violations and attempts to find a reasonable solution. Last, but not least, the role and respon¬sibility of the international community is scrutinized from the perspective of promotion and protection of human rights in connection with the previous and current background scenario of Burma.

Extended Seminar on Seeking Justice in Burma
Scroll to top