After an attack by the resistance on an area military outpost, Myanmar army troops open fire on the village from two helicopters before setting homes ablaze

The Myanmar army carried out an airstrike from two helicopters on Natchaung village in Sagaing’s Kalay Township on Thursday afternoon and set homes in the community on fire later that evening, according to local sources.

Natchaung, home to some 2,000 households, is located some 15 miles southeast of Kalay town.

After an armed resistance group ambushed a military-occupied high school in Natchaung—where some 100 soldiers were stationed—at around 10am on Thursday, the army sent two helicopters to the site at 3pm. They reportedly circled the village five times from south to north while firing shots.

“They fired shots for a long time. Each of the helicopter trips lasted around 20 minutes.”

Junta troops started torching houses in Natchaung at around 6pm after the local defence forces had left and many locals from the village had fled, another resident said.

Although few locals managed to escape during the afternoon airstrikes, more were able to leave in the evening, according to the resident.

“The [Myittha River] jetties did not dare to operate as the military was in the village, so most of the people just stayed in the village,” he said, adding that members of the Myanmar army had promised them in November that they would not harm anyone who stayed behind after such clashes and opted not to run.

He said that at least three homes were destroyed but the full extent of the damage was not known.

Soldiers raided six homes, stealing valuables and arresting locals who they accused of being connected to the resistance.

The Kalay chapter of the People’s Defence Force, the Chin National Defence Force, and a number of local guerrilla groups are operating in the region, according to the locals who spoke to Myanmar Now.

The airstrike not only damaged homes, but also monasteries, they added. Residents of other nearby villages, such as Nat Myaung and Chaungwa, were also displaced by the attack.

Initial reports said nine people were killed in the clash and the airstrike but Myanmar Now was not able to confirm this information.

With Sagaing and Magway becoming resistance strongholds in the 10 months since Myanmar’s military coup, the junta’s armed forces have been carrying out offensives in the regions, including using attacks from the air and burning homes in Ye-U and Yae Myet in Sagaing and Hnankhar in Magways’ Gangaw.

We tried to contact the junta’s information officers regarding the allegations of escalating attacks by its army, but the calls went unanswered. 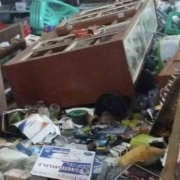 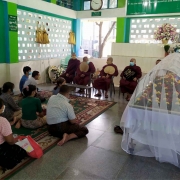 59 civil society organizations issue a statement on the massacre of Karenni...
Scroll to top