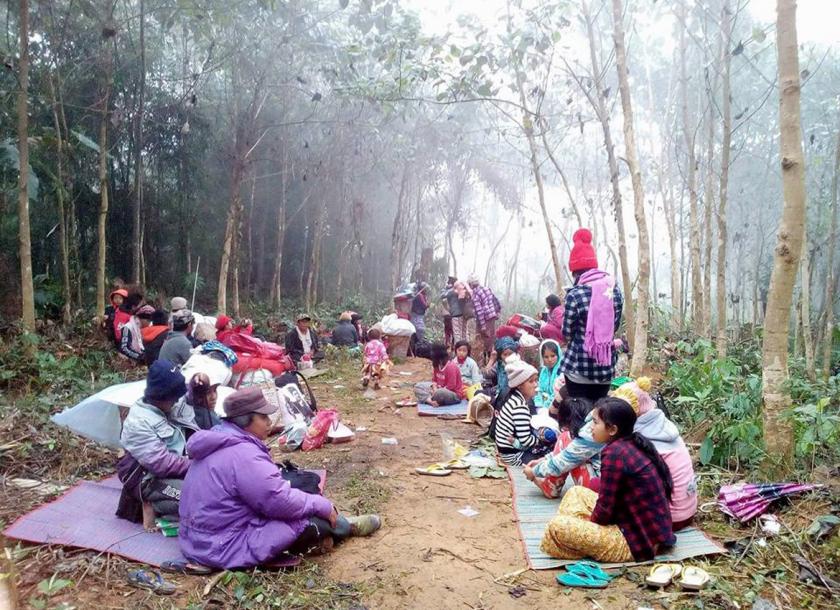 An escalation of armed conflict in northern Shan and Kachin states has resulted in a surge in IDPs, with the UN estimating 107,000 people are displaced in the area. In northern Shan State hundreds of civilians have fled fighting between the Tatmadaw and and the TNLA. In an area that saw armed conflict in 2016, five people were injured by a landmine.

In Kachin State, the Tatmadaw has ramped up attacks against the Kachin Independence Army (KIA) in three different townships. In Danai, over 2,000 civilians are trapped in the area and in need of food and medical aid. 10 civilians have reportedly been shot to death and others ordered to risk their lives clearing landmines. The KIA claims the military is trying to get control of the Danai mining area before the next Panglong peace conference as it is key to the armed group’s finances. The UN said it was concerned about the safety of civilians in the area.

In Karen State, government security forces have teamed up with the Karen National Union to fight the Democratic Karen Buddhist Army in battles that have last for over a month. Both the KNU and DKBA are signatories to the Nationwide Ceasefire Agreement.

The Shan State Progress Party/Shan State Army-North, also an NCA signatory, released a statement saying that the Tatmadaw had launched over 500 offensives against it within the last five years.

The New Mon State Party and Lahu Democratic Union will sign the NCA at the next Panglong session; some other armed groups have suggested this comes following government pressure.

The Tatmadaw admitted its soldiers had killed 10 Muslim men found in a mass grave in Rakhine. The Tatmadaw says those killed were “Bengali terrorists” and that soldiers will be dealt with for breaking the “rules of engagement.” The admission came the same day the two Reuters journalists, who had reportedly been investigating the mass grave, were formally charged under the Official Secrets Act.

An investigation by the Associated Press, based on interview with refugees in Bangladesh, was able to confirm the existence and location of 5 more mass graves. In harrowing reports, survivors told how soldiers “came to the slaughter armed not only with rifles, knives, rocket launchers and grenades, but also with shovels to dig pits and acid to burn away faces and hands so that the bodies could not be identified.” Burma continues to deny access to UN investigators and has only provided limited access to journalists, who have been taken on tightly controlled government visits.

Former U.S. Ambassador Bill Richardson resigned from the Rakhine advisory panel, saying it had become “a cheerleading squad for the government”. Richardson also said Daw Aung San Suu Kyi was “furious” when he tried to raise the issue of the jailed Reuters reporters. The full letter can be found here.

The two Reuters journalists were denied bail and may still see 14 years in jail for violating the Official Secrets Act.

The Shan national dialogue to prepare for the upcoming Panglong peace conference has been cancelled by NCA-signatory the Restoration Council of Shan State due to “ various persecutions by the Tatmadaw, making it impossible for the people to freely and democratically express their will and fully discuss their opinions.”

NCA-signatory the Karen National Liberation Army has said it will not attend the next session of Panglong as it believes the peace process has gotten nowhere under the 2008 Constitution.

The civil society peace forum met and agreed on two papers to be submitted to the next session of Panglong. One is on federalism and the other on resettlement and rehabilitation.

The Natural Resource Governance Institute published a report stressing the need for resource management to be part of the Panglong discussions.

Tatmadaw soldiers shot and killed 7 demonstrators in Rakhine after an event marking the end of  the Arakan kingdom turned violent. 12 people were injured, with some escaping hospital while receiving treatment for fear of being arrested by authorities. The government has said it will form an inquiry into the killings.

The International Commission of Jurists published a detailed study examining how impunity is coded into Burma’s laws and institutions, saying “decades of denial of justice for victims of gross human rights violations in Myanmar, and impunity for the perpetrators, particularly when involving the military, have severely eroded the rule of law.”

A child soldier on trial for speaking about his experience as a child soldier recruited by the Tatmadaw has said he will boycott future trial proceedings, declaring he does not trust the judge to deliver a fair verdict.

The Mine Risk Working Group found that the number of landmine victims in Burma rose by 58% between 2015 and 2016. Most casualties were in  Kachin, Kayah and Northern Shan states.

Artist San Zaw Htway died from the liver cancer he contracted as a result of the harsh prison conditions he endured during his 13 years of incarceration. Here a video of the artist at work.

Freedom of expression backslides in Burma

A majority of stakeholders at a digital rights forum held in Rangoon said they believed that there had been a backsliding on freedom of expression in the country and that online privacy had deteriorated.

30 MPs under investigation for corruption

30 MPs, including some regional ministers, are under investigation following complaints of corruption and mismanagement. Burma currently ranks 136th in a global ranking of corruption.

Massacre in Myanmar (A REUTERS SPECIAL REPORT)
Scroll to top