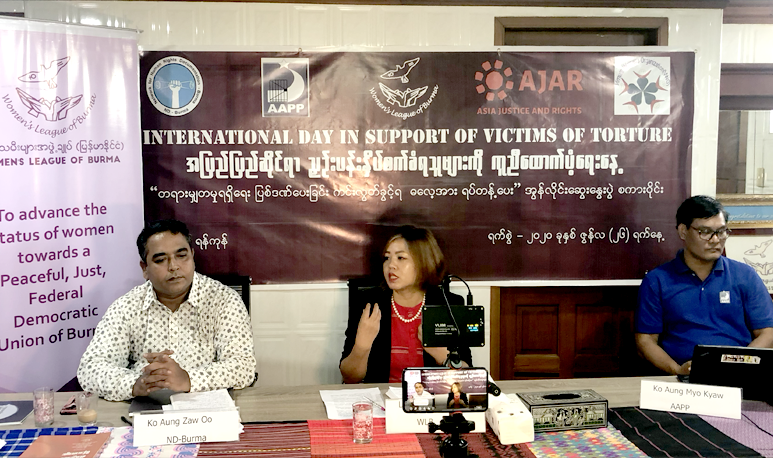 International Day in Support of Victims of Torture, 26 June 2020

On this International Day in Support of Victims of Torture, Women’s League of Burma (WLB), Network for Human Rights Documentation – Burma (ND-Burma), Assistance Association of Political Prisoners (AAPP), Vimutti Women’s Organization (VWO) and Asia Justice and Rights (AJAR) are calling for an end to torture, and for reparation and justice for torture surviors.

To mark this important day, and amidst restrictions to organise gatherings, we created an animation film entitled “Achieve Justice by Combating Impunity”, which illustrates how torture is used in Myanmar and the impact it has on survivors.

In Myanmar, torture is widely used in conflict areas. Amidst the Covid-19 pandemic, despite a wide call globally and locally for an immediate ceasefire, the Myanmar army announced only a limited ceasefire which does not cover the most active conflicts. On the contrary, the army is intensifying fighting in several areas including in Rakhine State, which leads to additional human rights violations including torture, against civilans. In several recent cases brought to light by social media, the Myanmar army was forced to admit that their troops committed torture, but justice processes are still elusive.

In addition, sexual violence as a form of torture in ethnic conflict areas continues to be documented, as well as the use of torture in detention centers and interrogation centers, often in an effort to procure information or to force confessions. It is the government’s responsibility to stop and prevent torture in its juridiction, and to prosecute and punish those who commit it. However, impunity still prevails and perpetrators remain unpunished.

In this context of the Myanmar government’s failure to take action, the recent proceedings at the International Criminal Court (ICC) and the International Court of Justice (ICJ) are welcome steps towards ending the culture of impunity and bringing justice for torture survivors.

The Myanmar government and the international community also have a duty to protect the rights of torture survivors and to provide appropriate remedies for the crimes committed against them. In addition to reparations, they must provide torture survivors with urgent interim relief, acknowledge the wrongs done to them, and prevent torture from recurring.

We call on the government of Myanmar to:

The Women’s League of Burma (WLB) is an umbrella organization comprised of 13 women’s organizations of different ethnic backgrounds from Burma. WLB was founded on 9th December 1999. Its mission is to work for women’s empowerment and advancement of the status of women, and to work for the increased participation of women in all spheres of society in the democracy movement, and in the peace and national reconciliation process through capacity building, advocacy, research and documentation.

ND-Burma formed in 2004 in order to provide a way for Burma human rights organizations to collaborate on the human rights documentation process.

The 13 ND-Burma member organizations seek to collectively use the truth of what communities in Burma have endured to advocate for justice for victims.

AJAR is a regional human rights organization based in Jakarta. AJAR works to increase the capacity of local and national organization in the fight against entrenched impunity and to contribute to building cultures based on accountability, justice and a willingness to learn from the root causes of mass human rights violations in Asia Pacific region.