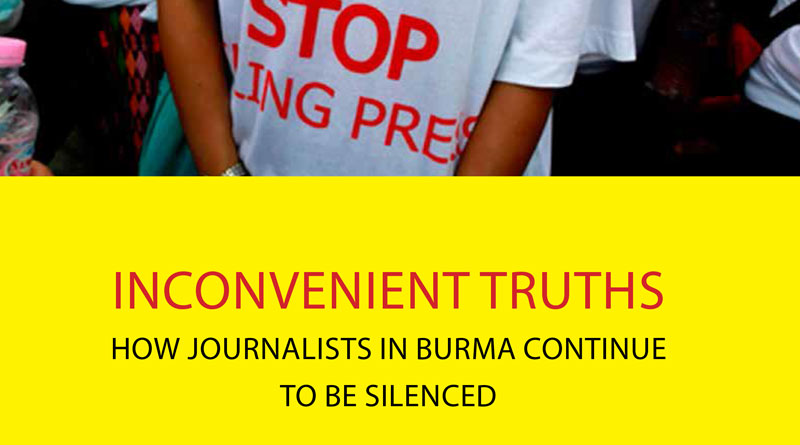 “If liberty means anything at all it means the right to tell people what they do not want to hear.”

In December 2016, investigative reporter Ko Soe Moe Tun was found dead at the side of a road in Monywa, north-west of Mandalay. He had been beaten with wooden sticks and died as a result of a skull fracture. At the time of his murder he had been researching a story on illegal logging in Burma/Myanmar. A journalist with Eleven Myanmar, he had previously reported on other sensitive topics, such as KTV Karaoke bars secretly operating as brothels.

The consensus in Burma/Myanmar is that Ko Soe Moe Tun was murdered by those who wanted him silenced. The Committee to Protect Journalists has urged that the investigation consider journalism as the main motive behind Ko Soe Moe Tun’s murder.

Public statements released by the team investigating the murder seem to follow this logic. At the time of writing three suspects have been arrested, two of whom are KTV employees. The authorities have been quick to react and the investigation is being conducted in a transparent manner. In a statement published a week after the murder, Reporters Without Borders welcomed the progress made by the police and “the fact that they are working on the assumption that Soe Moe Tun was probably killed in connection with his work”.

Burma/Myanmar’s media landscape has changed dramatically since former President Thein Sein began a process of reforms in 2011 that brought an end to pre-publication censorship, saw the release of imprisoned journalists, and resulted in the establishment of a free and vibrant press. However, it seems that decades of ultra-censorship have not prepared Burma/Myanmar society for the challenges of unbridled freedom of expression.

Indeed, Ko Soe Moe Tun’s murder comes at a time of escalating intimidation of and violence against journalists in Burma/Myanmar. Freedom House’s 2016 Report on the Freedom of the Press in Burma/Myanmar noted improvements in the overall media landscape, but highlighted the risk of threats and violence faced by journalists who publish critical coverage of the government, military, and rebel groups. According to journalist Htu Khaing, “A media with teeth can also provoke a backlash.”

The beginning of Burma/Myanmar’s backsliding on freedom of expression can be traced to the murder of freelance reporter Aung Kyaw Naing (also known as Par Gyi) in 2014. Par Gyi was shot and killed by Burma/Myanmar army soldiers while in military custody and buried without his family being notified. He had been reporting on renewed fighting between Karen rebels and the military in Mon State. After his wife pushed for a government investigation into his killing, it was found that his body showed signs of torture. Two soldiers under investigation were later acquitted of murder charges by a military court, and the police ended their investigation into the case in April 2016 even though the Kyaikmayaw Township Court ruled that Par Gyi had died of “unnatural causes.” A change of government lawyer mid-investigation raised suspicion of government interference in the case. The outcome of the protracted case sent a clear message: it was business as usual in Burma/Myanmar.

In March 2016, a bomb exploded in the home of Min Min, chief editor of Root Investigative Agency, based in Sittwe, Rakhine State. According to Min Min the bomb followed a series of anonymous threats on social media and was likely retribution for his agency’s reporting on various sensitive topics such as corruption among local officials and the illegal narcotics trade. No one has been charged with the attack.

It is not just hired thugs and soldiers’ guns that silence journalists. In November 2016, British journalist Fiona MacGregor wrote a story for the Myanmar Times reporting allegations that Burma/Myanmar army soldiers were raping Muslim women in Rakhine State. She was subsequently fired from the Myanmar Times for damaging the national reconciliation process as well as the paper’s reputation. A blackout of any reporting on the conflict in Rakhine State followed for several weeks after Ms. MacGregor’s sacking.

Nobel peace prize laureate Daw Aung San Suu Kyi has spoken of the importance of the freedom of press, but with notable caveats. At a speech to journalists in 2014 she said, “Unless there is a free press to check those who are in power, we will not be able to defend the rights and freedoms of the people. But at the same time this press has to be aware . . . of the great responsibility that it has for the stability of the nation, which is in fact what we are trying to do.”

The new government’s enthusiasm for prosecuting and jailing critics on defamation charges suggests a greater focus on stability and preserving the thin skins of politicians than on freedom of speech. At the end of 2016, both the CEO and chief editor of the Eleven Media Group were arrested on defamation charges under Article 66D of the Telecommunications Law for an editorial criticizing Yangon Chief Minister Phyo Min Thein. They were released on bail in January 2017 only after they had published a letter of apology to the minister and one of the accused had suffered a heart attack in prison. The case remains open.

According to PEN Myanmar, at least 38 people have been charged with online defamation since April 2016. Under the previous military regime it was used just seven times between 2013 and 2015. The law is now being amended after heavy lobbying from civil rights organizations, though the government’s record on freedom of expression thus far suggests that if Article 66D is indeed revoked, politicians will simply find other arcane pieces of legislation to silence those publishing inconvenient truths.

Limits on freedom of expression are a growing problem in the region. In Malaysia prosecutions for peaceful speech continue to rise while in the Philippines President Duterte has said that “son of a bitch” journalists are “not exempted from assassination.” With all the international goodwill behind it, Burma/Myanmar should set an example – not follow suit.

Pawns in their game: the military’s blocking of aid to IDPs in Kachin and...