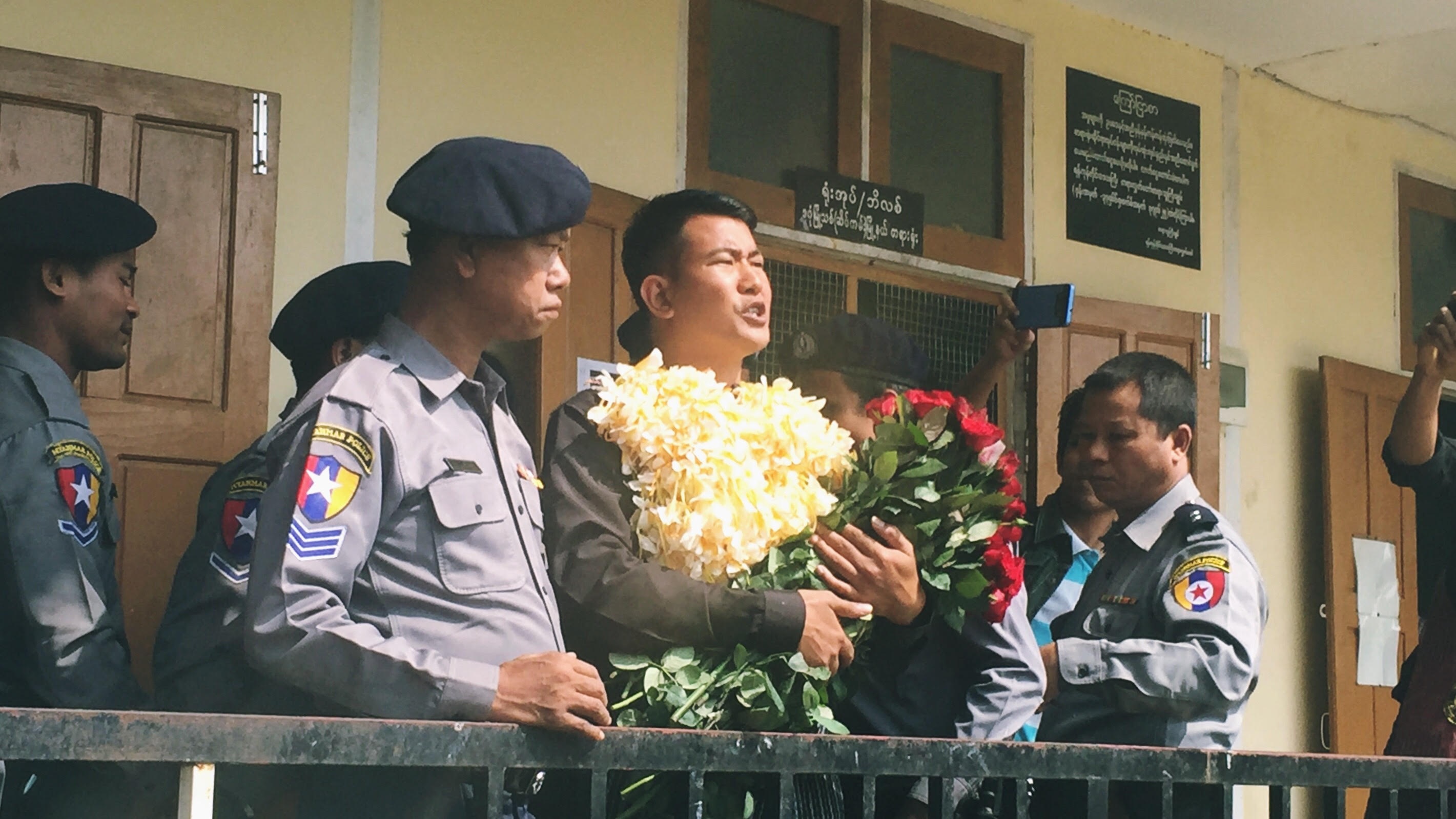 Hopes that the judge presiding over a controversial court case involving a former child soldier would drop the incitement charge brought against him were dashed on Wednesday as the magistrate in Yangon’s Dagon Seikkan Township decided to allow the prosecution to proceed.

The former child soldier Aung Ko Htwe, his lawyer and family members had thought the judge might rule against continuing the trial, in which the defendant has been charged under section 505(b) of the Penal Code after he gave an interview to Radio Free Asia (RFA) recounting his experiences as a minor conscripted into the military. The Penal Code provision prohibits statements made “with intent to cause, or which [are] likely to cause, fear or alarm to the public or to any section of the public whereby any person may be induced to commit an offence against the State or against public tranquility.”

Aung Ko Htwe faces up to two years in prison if convicted. He was arrested on 18 August, about a week after his interview with RFA was published.

The defendant’s lawyer Zaw Min Hlaing told journalists after Wednesday’s hearing that the prosecution had failed to reach out to the relevant Defence Ministry departments to determine the veracity of the experiences recounted by the defendant in his interview with RFA. The lawyer also questioned the basis of the plaintiff’s standing in the case, as a relatively high-ranking lieutenant colonel who would not likely have dealings with child soldiers on the bottom rungs of the military command hierarchy.

“They [the plaintiff and prosecution witnesses] don’t know what Aung Ko Htwe faced during that time because they are high-level officials. Also they should have inquired as to whether the words of Aung Ko Htwe are true or not,” he said.

According to Aung Ko Htwe’s lawyer, the defence will call eight witnesses to testify as the trial proceeds, including Burma’s commander-in-chief, Senior-General Min Aung Hlaing.

“The commander-in-chief has given consideration to the issue of child soldiers and a lot of child soldiers have been released during his term. That’s why we put his name on the witnesses’ list,” said lawyer Zaw Min Hlaing, but adding: “I’m not sure that he will come to court.”

Aung Ko Htwe told the court that he was not guilty of violating section 505 b) and had simply answered the RFA interviewer’s questions about his feelings, difficulties and experiences as a child soldier.

“I told RFA my feelings. I had no intention of defaming the military,” he said.

Nay Zar Htun, a sister of Aung Ko Htwe, told DVBthat she planned to protest against the military on 19 January in Naypyidaw, despite local authorities objecting to her specifically pointing the finger at the military for her brother’s hardships as a child soldier.

“I will also submit letters to the Office of the Commander-in-Chief and the Supreme Court of the Union on 19 January,” she said.

More Than Words: Apologies as a Form of Reparation