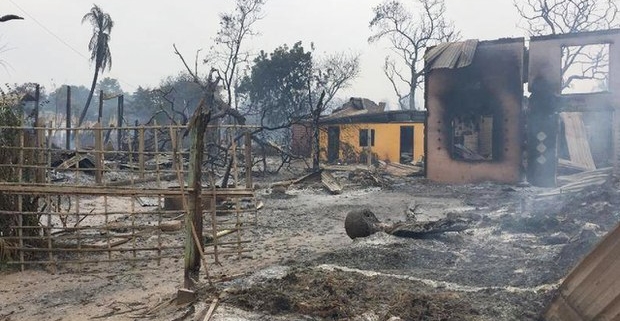 Pro-junta forces have torched more than 1,000 homes in four villages over five days.

Junta troops and pro-military militiamen in Myanmar’s Sagaing region burned down more than 700 homes in Pale township over the weekend, according to sources, amid a scorched earth campaign that has left some 1,100 buildings destroyed in four neighboring villages over the span of five days.

On the evening of Feb. 4 soldiers and members of the Pyu Saw Htee militia entered the villages of Hlaw Gar and Kine Twin, sending inhabitants fleeing, residents told RFA’s Myanmar Service. Villagers who hid near the area said they saw fighters from the two groups loot homes before setting them alight, destroying around 500 of 1,000 homes in Hlaw Gar and some 200 of 260 in Kine Twin.

“They burned down the homes in Kine Twin village … and then they moved north. Pyu Saw Htee forces entered Hlaw Gar village around 10:30 p.m. and raided the homes. They seized the property they wanted and transported it to Inn Ma Htee village, where the military is training Pyu Saw Htee members,” said a villager from Hlaw Gar, who spoke on condition of anonymity, citing fear of reprisal.

“Around 1 a.m., Pyu Saw Htee members in plainclothes started burning the homes. The military soldiers wearing uniforms extinguished the fire,” he added, suggesting that troops did not want to be seen carrying out arson.

Sources told RFA that residents remain too frightened to return to the area because junta troops had left “secret monitors” to watch civilian movements.

They said the weekend arson was the latest in a series of burnings in response to a Jan. 23 attack by local anti-junta People’s Defense Force (PDF) militiamen on the military camp used to train members of the Pyu Saw Htee in Inn Ma Htee village.

Within the space of five days, the military and pro-junta militia members have razed buildings in four villages lying within six miles of each other. At least 400 structures were burned on Jan. 31 in Mwe Tone and Pan villages, which lie just northwest of Hlaw Gar and Kine Twin.

A 40-year-old resident of Kine Twin village who lost his home over the weekend told RFA he had been on the run for five days straight.

“I have had to temporarily flee the village since the [PDF] attack on Inn Ma Htee village. Finally, I decided not to return and ran for my life,” said the villager, who declined to be named.

“The people [of Kine Twin] are now staying in nearby villages or in the woods. They fled on their carts with their cattle and are now sheltering under trees. … The weather is so cold. It is very challenging for elderly people. No one has slept for days.”

The resident said that the refugees feel insecure and afraid that they will be targeted by airstrikes, which the military increasingly employs against villages it sees as friendly to the PDF.

The bodies of 11 people were discovered in Myinmu township’s Padoke Tine village on Feb. 4, days after the military carried out an airstrike on a graduation ceremony for PDF recruits with five helicopters, killing some 20 civilians, sources told RFA last week.

A PDF member from Pale township told RFA that the recent incidents show that the military will use whatever means it can to crush anti-junta forces.

“This is brutal, and they are victimizing the local citizens. But they will pay for what they have done. … We are always waiting for the right time to strike back at them.”

On the evening of Feb. 5, PDF forces led an attack on the police station in Pale town center and engaged with security forces. The following morning, the military fired artillery on villages in the surrounding area that they accuse of providing haven to PDF fighters, sources told RFA on Monday.

“The shelling blast from the junta troops’ artillery fire burned homes. After the fire, people in town were too afraid to stay. They packed up their valuables and took shelter in nearby monasteries,” said one resident of Pale town.

Later, around 30 soldiers arrived in Pale town and nearby villages and arrested those who remained or took them for interrogation, said Phoe Thar, a member of the Black Panther PDF group.

“We heard they fired guns, beat the adult males and seized mobile phones, but I heard those who got arrested were released after a while. They spread the military columns and cleared the nearby area. All the people from the villages on their operation route have fled. Some villages are deserted now.”

Repeated attempts by RFA to reach junta spokesperson Maj. Gen. Zaw Min Tun for comment on reports that the military and Pyu Saw Htee fighters had been setting homes on fire in Pale township went unanswered over the weekend and on Monday.

On Sunday, the junta announced that security forces and troops from the Sagaing regional command division were working together in response to the attacks on the Pale police station.

According to the research group Data for Myanmar, which documents the impact of armed conflict in the country, junta forces have burned down at least 3,379 homes from 126 villages and townships in nine regions and states in the year since the military seized power in a Feb. 1 coup. More than 1,400 of the homes are in Sagaing region, the group said.

Telenor has shared sensitive customer data with military since the coup: industry...