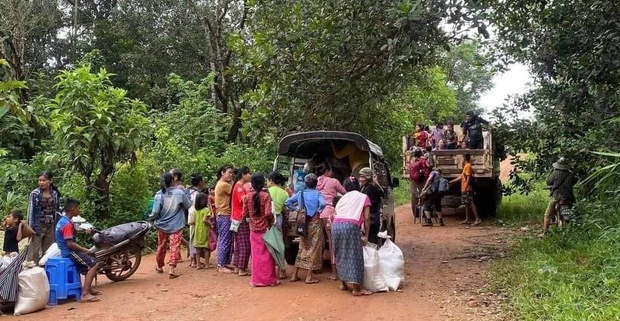 Violence has risen sharply in the southern region since the start of the year, a research group says.

At least 214 civilians have been killed and 89 injured in southern Myanmar’s Tanintharyi region in the 18 months since the country’s military seized power in a coup, according to local research group Southern Monitor.

The group said in a statement on Thursday that since the Feb. 1, 2021 coup, at least 17,415 people in Tanintharyi – the home region of junta chief Snr. Gen. Min Aung Hlaing’s parents – were forced to flee their homes, while 93 homes were destroyed in arson attacks over the same period.

The dead included those killed by junta troops as well as victims of retribution attacks by the armed opposition for their alleged role as informants for the military regime, it said.

Southern Monitor’s information officer told RFA Burmese that the number of civilian deaths in Tanintharyi has risen sharply since the beginning of 2022, with the months of April and June being the deadliest.

“Violent incidents in Tanintharyi region have increased significantly in 2022. People died in an increasing number of battles as well as in bombings and landmine incidents,” said the officer, speaking on condition of anonymity.

“Another worrying trend is the killing of civilians. It can be said that killings by both sides have increased quite a bit.”

He said most of the assassinations and civilian deaths occurred in Tanintharyi’s townships of Launglon and Yebyu.

A spokesman for the anti-junta Democracy Action Strike Committee (Dawei) told RFA that most of the fires were started by the junta troops and pro-military Pyu Saw Htee militia fighters raiding villages.

“A military column would come and a battle with PDFs would occur. When [the military] couldn’t proceed any further, they’d set fire to a nearby house,” said the spokesman, who also declined to be named, citing security concerns.

In Launglon, they just set fire to the houses, even though there were no clashes. One of the houses burnt down was owned by a former Dawei District Protest Committee member. At the time of the incident, he was a member of the committee. There were also cases when the Pyu Saw Htee and the military came together and just burned down a house for no reason.”

According to the Dawei Political Prisoners Network, as of April 29, there were 221 political prisoners in detention in Tanintharyi, two of whom have been sentenced to death by the junta.

Residents of the region told RFA that the armed resistance in Tanintharyi started in earnest in August 2021 in response to the military’s violent crackdowns on civilians.

A spokesman for the Palaw Township People’s Defense Force said most of the fighting in Tanintharyi region, up until recently, had been caused by military clearance operations. He claimed that the armed resistance was not responsible for starting any clashes.

“The fighting we have here began when they entered the area,” said the spokesman, who also asked to remain anonymous.

“We’re not in a position to attack them yet because we are still in a state of preparation. The PDF has not launched any offensives, except one.”

According to the list compiled by Southern Monitor, from June 2021 to July 2022, there were 133 battles and at least 141 attacks using landmines. Most of the attacks took place in the townships of Dawei, Launglon, Thayetchaung, Palaw and Tanintharyi.

The United Nations Office for the Coordination of Humanitarian Affairs announced Wednesday that the number of people displaced by violence in Myanmar had ballooned to 866,000 from 346,000 prior to the coup.

It said most of the refugees are in urgent need of humanitarian assistance, but the junta has yet to announce any plans to address the problem.

The Human Rights Foundation of Monland Releases a New Briefer, “The Rise...

TIME FOR THE EMERGENCE OF A NEW NATIONAL HUMAN RIGHTS COMMISSION REPRESENTING...
Scroll to top