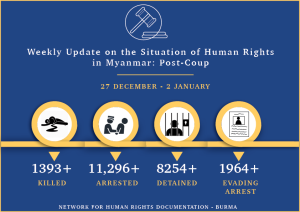 On 1 January, the Assistance Association for Political Prisoners reported that since 1 February, 1393 people had been killed, 11, 296 arrested and over 8000 are still being unlawfully detained. In December alone, according to the National Unity Government, over five dozen civilians were murdered and tens of thousands were displaced by the junta’s violence. The Women’s League of Burma reported that nearly 100 women were among those killed by the regime in 2021.

Prospects for peace for the people of Myanmar appear more distant now, than in recent times. The turmoil and terror spurred by the military junta since the failed February coup have squandered hopes and dreams of young people, and perpetuated a growing feeling of instability. Despite the junta’s fear mongering, the spirit of civilians, revolutionary fighters, human rights defenders and people of all ages, genders, and socio-economic backgrounds has not been broken.

The resilience seen over the last 11 months speaks volumes to the strength and courage citizens have embodied and exemplified. Yet, in the midst of the devastating times and harrowing levels of violence, the international community has countlessly been too slow to act. Dozens of statements were accompanied by condemnation but no action. Closed door meetings with the UN Security Council failed to meet the moment of crisis and urgency being made from the ground.

As the year came to an end, the conflict in Myanmar’s ethnic areas did not ease. Quite the contrary, airstrikes and ground attacks saw the forced internal displacement of thousands. Women, children, and the elderly were among those without adequate shelter, food or clothing while they were fleeing for their lives to the borders of neighboring countries, including Thailand. In Karen State,  on December 23 and 24, the junta launched three airstrikes in surrounding villages of Lay Kay Kaw. The Karen National Union (KNU) has emphasized that there is a ‘high possibility that [the attacks] will happen again.’ The KNU, in addition to civil society organizations, have urged for collective action to the atrocities in Myanmar which are ongoing, systematic and widespread.

A New Year is a renewed opportunity for action and accountability. The international community must not fail the people of Myanmar who have been more than patient. Time must not be wasted, and true, meaningful steps towards holding the junta accountable for their endless crimes against humanity, war crimes and genocide.

Violence in Karen State has been increasing throughout the year periodically and more so recently since the end of December 2021. According to the Karen Peace Support Network, , the number of IDPs and refugees to date has fluctuated as Thai authorities only allow war victims to cross into Thailand when they hear gun fire. After a while, those who had fled were pressured to return to Karen State.

The updated numbers of refugees in Thailand is currently around 5000 who are sheltering in various places in the country. However, ground reports suggest significant pressure from Thai authorities for those fleeing violence to be sent back. It is unlawful, and harmful to send innocent civilians fleeing a war zone back into an environment that is unsafe.

ND-Burma member, the Human Rights Foundation of Monland, reported that fighting between the Karen National Liberation Army of Brigade 6 in Dalee village took place on 31 December. At least 60 households, and an estimated 240 villagers fled to nearby KNU controlled areas.

More attacks by the military junta are creating rampant displacement amidst Internet cuts and blocking urgently needed humanitarian aid. On 28 December, more homes were burnt to the ground in Kale Township, Sagaing. Ongoing airstrikes and ground attacks left 20 civilians dead, and displaced thousands more. Civilian defense forces are actively fighting with the Myanmar military who is retaliating against innocent villagers in response.

Residents of Ye-U village were found ‘burnt beyond recognition’ following airstrikes a few days earlier. Among the seven people killed, two included women. Some of the bodies were half buried near a home that had been destroyed. In the relentless assaults across the country, Sagaing region is among those which have been hit the hardest as civilian casualties continue to grow, adding a horrifying layer of devastation to the current crisis.

In Shan State, Pekon Township, two villagers who were abducted by the junta and forced to guide soldiers died in custody. The two men, aged 67 and 49 were among 19 villagers taken hostage at the end of October.  The two victims had stayed behind during a raid on their village to take care of the elderly residents. Their bodies have not been returned to their families as clearance operations, including theft and arbitrary arrests, have left the region in shambles.

Reports of more civilians being tortured in military custody included a teacher, and a couple who were members of the National League for Democracy who were killed in military custody. These awful atrocities are being violently committed in areas where resistance forces against the regime are most active.

JOINT STATEMENT BY THE CIVIL SOCIETY ORGANIZATIONS OF MYANMAR AND CAMBODIA CONDEMNING...
Scroll to top