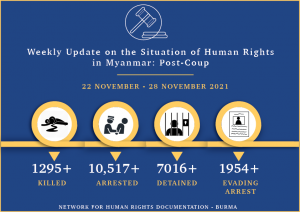 For families in Myanmar, fear and uncertainty occupy their darkest thoughts. The possibility of being separated or killed during a raid by the junta has contributed to the harrowing ordeals civilians have been forced to confront since February.  As more and more activists and former politicians are abducted by the Myanmar military, relatives of activists are among those being detained in their place. The taking of hostages is considered a war-crime under the Geneva Convention, and yet the junta continues to show disdain and disregard for any international human rights laws and principles.

As a result of the frequency of the raids, parents and grandparents have been forced to make devastatingly difficult decisions. Fearing for their physical and mental system, relatives of activists are cutting ties with them, though human rights defenders are not harboring any resentment. The junta is arresting anyone who they deem is a threat through unproven suspicions and often a racial bias based on ethnicity and religion. They want to cut all ties with leaders who strongly oppose the coup.

Family members taken hostage are being killed while in custody of the junta. Last week, a man detained in place of his nephew who could not be found during a raid was killed within hours of being interrogated by military intelligence  and showed evidence of severe injuries. His nephew was a prominent protest organizer wanted by the regime. More recently, a 19 year old named Phone Myint Aung who was arrested with his father, was killed while in custody of the junta. His funeral was attended with plain clothed police officers. The extent of the growing numbers of arbitrary arrests was commented on by the United Nations who called for the attacks to stop with at least 175 people having died while in custody since February.

Children are also being used as pawns by the military. The seven year old daughter of a journalist detained by the junta was asked if her mother had bought guns. This type of behavior is not uncommon. The Myanmar military regularly uses desperate means of coercion to try and extract the information they desire. Their actions reinforce the urgency surrounding this years 16 Days of Activism which is held annually to bring attention to violence against women and girls. The safety of young women is in jeopardy with the military authorities dominating the legal system and soldiers with a reputation of impunity. The campaign is an important reminder of the perils women are faced with on a daily basis and the important work being done by women’s rights organizations which must continue to be supported.

A catholic church which also housed a clinic in Loikaw was raided by junta soldiers on 22 November. Over 200 soldiers and policemen arrested 18 health workers (including four doctors, nurses, pharmacists and volunteers). They also forced over two dozen patients to leave the premises. Medical records were unjustly confiscated. Attacks on religious buildings where local populations have sought safety from violence are increasingly being targeted by the regime. Churches in predominantly Christian States such as Kayah and Chin States are being shelled by artillery and burned to the ground. At least 10 parishes in Loikaw Diocese have been impacted by the violence which has also forced over 100 000 to flee.

Internal displacement of innocent civilians continues to be fuelled by ongoing clashes between the military junta and local People’s Defence Forces (PDF).

In Magway region, over 2000 residents of Saw Township were forced to flee worsening offensives during retaliation strikes by the junta.. The junta used helicopters to fire at PDF positions which sent villagers from surrounding areas to also flee, including the elderly and children. Internally displaced persons who sought safety in the jungle said they have been moving constantly and have not been able to sleep well. Tatmadaw soldiers have stated anyone found hiding would be assumed an ‘enemy’ and killed.

Justice has yet to be met for Ko Nyi Khin, a volunteer supporting internally displaced people in Pekon township, southern Shan State. This area is under heavy militarization by the military junta as clashes escalated between civilian armed defence forces and the Tatmadaw.  Ko Nyi Khin was arrested earlier this month and beaten by soldiers before being taken away. After three days of interrogation, his death was announced though his body has not been released by the authorities.

Violence in southern townships of Shan State has been forcing civilians to flee regularly. Military junta soldiers are repositioning themselves in local areas making fleeing a regular occurrence. They are fearful of being caught but risk survival in remote areas without food, shelter or water. The elderly and young children are especially hard hit by these challenges as livelihoods are crippled by farmers not safely able to access their fields to harvest.