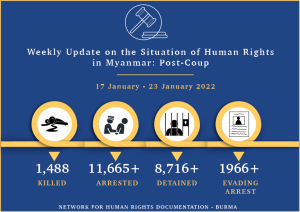 The cracks in the military junta are showing. In addition to heavy casualties, the regime is struggling to maintain recruits. The Myanmar Army has less support now than ever as an unstoppable Spring Revolution topples the regime’s incessant claims for legitimacy.

Junta casualties continue to mount as the regime sends more reinforcements while expanding their recruitment tactics, which now include the wives of mid-ranking soldiers and compulsory military training for the children of soldiers who are over the age of 15. This is in violation of laws which strictly prohibit the use of children in combat. As the junta continues to engage in unlawful practices, soldiers are continuing to defect at an unprecedented rate. To counter this, the junta has even attempted to coax some retired soldiers out of retirement to battle the resistance movement. Over 8000 soldiers and policemen have joined the civil disobedience movement, and an estimated 2000 soldiers have defected with many more considering leaving the regime. The NUG has offered protection to those who do so. According to the National Unity Government of Myanmar (NUG), 160 soldiers were killed within the first month of January 2022.

The ongoing airstrikes by the Myanmar junta are also a sign of the Tatmadaw losing the fight between them and the people as experts speculate that the reliance on air attacks is a sign of weakness. Even so, it is the regime’s ruthless targeting of innocent civilians which has created a refugee crisis as people flee to various borders and neighboring townships seeking safety. During a meeting over the last week, Noeleen Heyzer, the U.N. secretary-general’s special envoy on Myanmar, called on Thailand to take a more proactive role in responding to the humanitarian crisis in Myanmar. There are now over 3 million people in need inside the country, who have been vehemently deprived of their basic rights to protection and survival. The majority of those who require support continue to be women, children and the elderly.

As the international community bides its time waiting to respond, the people on the ground are suffering. The junta is still evading wide-spread accountability and as a result, they have failed to halt any of their offensives. Rather, they are committed to expanding their forces to squander the resistance at all costs. The leaders of the world must act with intention and urgency. The many victims and families of the junta’s crimes deserve justice and to be heard.

In Chin State, the resistance and opposition to the military junta remains fierce. The Chin Human Rights Organization (CHRO) says they have documented over 180 killings and unlawful deaths, in addition to the arrests of 892 Chin people by the military junta. The junta deployed airstrikes in civilian areas in northern Chin State after local armed forces attacked a military convoy carrying over 150 soldiers near Hiangzing village.

Horrifying evidence of crimes committed against civilians continues to emerge. Of the ten civilians abducted by the junta in Matupi Township, Chin State, all were found with signs of severe torture before they were killed. Among the victims was a 13 year old boy who had his throat slashed. CHRO has said those responsible are from infantry battalion 140 based in Matupi.

The steady increase in fighting has forced opposition groups to prepare for an even worse onslaught of violence. A spokesperson for the Chin National Front said more operations are ‘likely to be carried out in the northern and southern parts of the State.’

Refugees and IDPs from Karen State are continuing to flee violence perpetrated by the military junta. Almost 50 000 IDPs who had been forced to leave their homes over the last month are seeking refuge from the onslaught of offensives that they continue to be berated with. In territory controlled by the Karen National Union, there has been an increase in IDPs who are seeking safety and shelter in nearby villages. Karen civil society organizations alongside local communities are urgently trying to respond to emergency needs including shelter, food and basic hygiene items.

Along the border, there are between 3000 and 5000 refugees. Many of those displaced include women, children and the elderly who require medicine in addition to food and clean drinking water. The junta is continuing their onslaught of violence through air and ground strikes not only against Karen armed groups but also against innocent civilians in refugee camps – as was the case on January 13 when the regime launched an airstrike on a Democratic Karen Buddhist Army base where many IDPs had fled.

KAYAH (KARENNI) STATE
No one appears to be safe from the military junta’s violence. In Kayah (Karenni) State, civilians were urged by the Karenni State Consultative Council (KSCC) to build bomb shelters for their own protection. The announcement came after two IDP camps were bombed with aerial strikes which killed six people on 17 January. Three medical volunteers were also killed in airstrikes in Nann Mal Khon village the day before on 16 January, in yet another incident where civilians have been directly targeted. The KSCC said, “the regime is clearly murdering both innocent civilians and resistance fighters without any discrimination. [They] are committing genocide and it will potentially increase in ferocity.”

According to the Karenni Nationalities Defense Force, between 7 and 17 January 2022, the junta deployed at least eight airstrikes in the State.

Boy, 10, among four civilians killed by soldiers in Sagaing after resistance...
Scroll to top