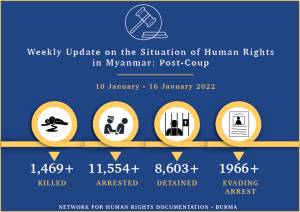 The Myanmar military’s war on the people has continued unabated and without international action for the last eleven months. Innocent civilians including women and children remain caught in the crossfire. Over the last week, worsening offensives in Karen and Kayah(Karenni) State have forced thousands more civilians to flee where they are in desperate need of humanitarian aid. Inside Myanmar, key aid routes remain blocked. The regime has targeted first responders since the beginning of the attempted coup, and have not hesitated to intercept food deliveries and have even burned supplies intended for the most vulnerable.

Civil society organizations have boldly continued to document the widespread human rights violations taking place on the ground. Evidence of the junta’s crimes are essential for ensuring justice for the thousands of victims at the highest possible level of international jurisdiction. Civilians must not be targeted or used as human shields. They must be permitted safe passages to flee and aid must not be blocked. By failing to adhere to basic norms and protection for civilian life, the junta is responsible for crimes against humanity and those amounting to war crimes.

Despite a visit by Cambodian Prime Minister, Hun Sen, the Association of Southeast Asian Nations (ASEAN) is not in agreement on how to engage with the terrorist junta. Cambodia, who is the current chair of ASEAN, postponed a meeting with the foreign ministers citing travel concerns. However, observers were quick to note that it likely signals something quite the country – rather the brewing disagreement over inviting any junta representative.

The Special Advisory Council for Myanmar (SAC-M) was among those to condemn the visit by the Cambodian Prime Minister who came to Myanmar while the junta forces were launching airstrikes in ethnic areas. “Prime Minister Hun Sen undertook an ill-advised and contested visit to Naypyitaw to meet with Myanmar junta leader Min Aung Hlaing on 7 and 8 January 2022.” said SAC-M in a statement released on 11 January.

The voices of the people in Myanmar cannot and will be silenced. It is time the international community took action and responded to their calls for protection, safety and justice.

Civilians in Karen State have been forced to flee worsening offensives as the junta continues to deploy air and ground strikes in local villages. According to ND-Burma member, the Human Rights Foundation of Monland, sources from the Karen National Liberation Army Brigade 6 forces, landmines planted by the junta battalions were found in some Mae Htaw Thale village in Kawkareik Township houses. “We just discovered the Burmese soldiers have planted landmines under the homes, inside the rooms, and yards. As a result of the landmines, many conflict-affected IDPs have been unable to return to their homes. The junta battalions burned down an estimated 65 houses. Because of losing their residences and the Burmese laying landmines in civilian areas, it has been challenging for them to return.”

The Karen Peace Support Network reported on 13 January at 1AM, the military junta “conducted deliberate and indiscriminate airstrikes on Shwe Nyaung Bin located between the border of Bridge 1 and Bridge 5 of the Karen National Union controlled area. A civilian was killed and three were severely wounded from the attack.”

These attacks have prompted calls from Karen civil society and allied human rights groups for international action, including sanctions and the halting of aviation fuel which supply the military jets.

Ongoing airstrikes in Kayah (Karenni) State have forced the majority of people living in the capital city of Loikaw to flee. The attacks were launched on 8 and 9 January after intense clashes followed between resistance forces and the military junta. Civilians reported being hesitant to flee because they could hear helicopters hovering and the status of the town has been described as ‘deserted’ while the junta continues to threaten a full-blown offensive if anti-coup forces do not surrender. Offensives have forced over 150 000 people across the State to flee to neighboring Shan State or close by villages. Loikaw was hit with more airstrikes launched by the military junta on 12 January as fighting continued.

The Karenni National Progressive Party (KNPP) has called for protection for civilians affected by the ongoing military offensives. In an appeal to the international community, the KNPP made clear that the regime is deliberately targeting civilians by burning their homes, and buildings in their villages. Electricity and water have been cut off by the junta in Loikaw on the weekend.

The Karenni National Progressive Party announced that they are committed to exposing the junta’s widespread human rights violations by creating a documentary. One quarter of the population in conflict-torn Kayah (Karenni) State has been forcibly displaced by the Myanmar military’s violence. The junta has committed serious violations which have forced the most vulnerable to the brink of survival.

The announcement comes as more harrowing evidence emerges of the massacre where more than 30 people were killed in Kayah (Karenni) State, including women, children and the elderly. During a press conference, a doctor who carried out post-mortem examinations of the remains called the crimes against the victims said they were “murdered in the cruelest and most inhumane manner I have ever seen in my entire life.”

Over the weekend, the Kayah (Karenni) capital city of Loikaw was violently assaulted by junta armed forces in clashes which killed at least four civilians and displaced over 1000. The civilian armed resistance in Kayah (Karenni) State has been met with brute force from the Myanmar military. The ‘scorched-earth’ tactics being used are indicative of a worrying tactic of the junta to eliminate opposition, even at the cost of innocent civilian lives.