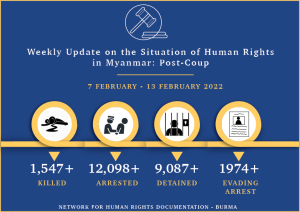 In July 2021, one of Myanmar’s major telecom operators and second largest telecom businesses, Telenor Group, announced they were leaving Myanmar. The decision came approximately six months after the junta had launched their failed coup.  In addition to leaving Myanmar, Telenor sold the entire company to M1 Group, a Lebanese investment group. The military junta reportedly rejected this sale, and privately approved a partnership with M1 Group and a military linked business called Shwe Byain Phyu Group.

In the months that have passed since, mounting fears have arisen over the safety and security of Telenor’s 18 million customers. Telenor’s departure could put thousands in danger with the threat of data getting in the hands of the junta. A petition was widely circulated which called for Telenor Group  and the Norwegian Government to immediately halt the sale of the company. Additional concerns included the proceeds earned which will only support the regime and embolden them to continue their assaults on the civilian population.

The failure of Telenor Group to comply in line with basic human rights standards led to the  Norwegian Forum for Development and Environment submitting a complaint against the leadership of Telenor to the police. A top judge is among those who have suggested that Telenor board members and Norwegian authorities may be ‘aiding and abetting crimes against humanity.’ Data must be safeguarded!

The junta’s voice does not represent the people of Myanmar. And yet, the International Institute of Communications, a group with a reputation for laundering for the Myanmar junta, invited the military’s telecom regulator to speak on a panel regarding citizen protection. Journalists were barred from the event in further evidence of a lack of transparency.

After over one year, the voices of the people in Myanmar are louder and more clear than ever. They are not to be represented by any member of the unlawful, terrorist junta.

Displaced villagers in Karen State are fearful for their futures which remain uncertain against the backdrop of unrelenting conflict. Internally displaced people (IDPs) are being forced to seek refuge and live along the banks of the Moei river along the Thai-Myanmar border. Local organizations have estimated that the attacks by the military junta have led to 10 000 villagers from Lay Kaw Kaw and nearby villagers (as many as 4000) being forced to flee.

Thailand’s assistance to those seeking safety a sbeen limited. At the end of January 2022, the government closed Mae Kon Ken village, a temporary village. Since then, the needs of those displaced have been exacerbated exponentially.

Fearing return, villages are forced to make unimaginable decisions. With landmines littering their homelands and an ever increasing presence of the junta, options are limited for safety and refuse. The military’s insincerity and refusal to leave civilian areas in Karen State ast the request of the Karen National Union (KNU) led to the armed group refusing the junta’s invitation to ‘preliminary peace talks’ at Union Day held on 12 February.

Over 170 000 people have been displaced in Karenni (Kayah) State, with the military junta controlling less than 10 percent of the State as a result of sharp resistance by opposition forces. At least 120 000 are seeking shelter in buildings and forests throughout Karenni (Kayah) State. In a joint briefing paper released by the Karenni Human Rights Group and ND-Burma, The World Must Know,  it was concluded that despite repeated calls by civil society organizations and international bodies to the military junta to immediately cease their assaults on civilian lives, the atrocities are incessant.

Yet another Karenni (Kayah) IDP camp was struck by artillery firing by the military junta in Demawso Township. The attack led to one civilian injury, and several buildings being destroyed. Now, once again, the IDPs have been forced to flee amid mounting stress over the safety of designated camps. This comes as Internet and phone blackouts have been worsening in Karenni (Kayah) State. Communication blackouts have been intentionally imposed by the military junta to make it more difficult for civilians to access information on the situation and where to seek safety.

In January 2022 alone, at least 45 people were killed by indiscriminate firing by the military junta.

Approximately forty civilians were killed in less than two weeks by the  junta in the conflict-torn Sagaing region. Those killed include women and children in four townships. Between January 28 and February 6 alone, over 38 villagers were killed during military raids. Amid an ongoing scorched earth campaign, 5000 more residents were forced to flee on 10 February following homes raided and burned down in four villages in Mingin and Taze townships. During the raid, almost all of the homes in Moktha Village (178 out of 200) were burned down.

On 4 February, bodies of elevan civilians were found after the junta deployed an airstrike on a PDF base during a graduation ceremony. The attack killed nearly two dozen civilians. The harsh conditions of the weather and unsettling fears of attacks has left civilians traumatized and have particularly made for additional hardships for the most vulnerable, including the elderly.

Bodies of four civilians found in Sagaing after soldiers burn down two vill...