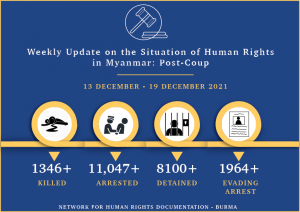 In 2016,  the Assistance Association for Political Prisoners (AAPP), one of the members of the Network for Human Rights Documentation – Burma,  released a report on prison conditions in Myanmar, and the urgent need for reform. Among their key findings, overcrowding in cells led to the deterioration of health conditions of inmates. Prisoners were regularly subjected to torture and inhumane treatment leading to deaths in custody.

In 2018, another report: “Activism and Agency,” also authored by AAPP looked at the experiences of female prisoners specifically which drew similar findings including sexual, physical and psychological abuse and harassment. Across decades, those detained in Myanmar’s various detention centers are not safe. Since February, thousands of innocent civilians including human rights defenders have been arrested, detained and subjected to harrowing treatment in military custody. Despite the many calls of groups like AAPP, the junta has not reformed prison conditions to be in line with international standards  in the slightest.

Over the last week, more evidence emerged of unlawful treatment of prisoners, including a freelance journalist who became the first member of the press to be tortured to death by the junta in prison. Following a nationwide strike held on 10 December (Human Rights Day), inmates at Insein Prison participated in solidarity with the pro-democracy movement by refusing to leave their cells. They also sang an anti-dictatorship song when the junta interrogated them about the leaders of the protest within the prison. The regime responded violently by beating prisoners until they were no longer conscious and then subsequently denied them medical treatment.

The All Burma Federation of Student Union expressed worry for those who had been beaten, and then held in solitary confinement. Ko Bo Kyi of AAPP has said on multiple occasions that prison conditions have significantly deteriorated since the failed coup as the junta continues to abuse prison rights with impunity.

Systematic use of torture in prisons is a violation of international law. The junta is lawlessly detaining innocent civilians and then further subjecting them to conditions which deprive them of their dignity, safety and well-being. Human Rights Watch, BBC, the New York Times and the Associated Press are among the many who have documented the atrocities committed against civilians behind prison walls.

Basic Principles for the Treatment of Prisoners outlined by the United Nations Office for Humanitarian Affairs make clear that ‘all prisoners shall be treated with the respect due to their inherent dignity and value as human beings.’ The illegal junta has failed to protect and uphold prisoner rights. The international community has an obligation and responsibility to respond to the atrocities taking place to set a precedent that no one is above the rule of law, and to protect the lives of detainees.

With over 80 000 displaced,  Karen villagers are in need of warm clothing as the cold season takes its toll on civilians forced to flee increasing junta offensives. The military junta has not eased in its brutal campaign of warfare against the Karen which has gone on for decades. On 15 December, reports emerged that over two-hundred soldiers had invaded the civilian town of Lay Kay Kaw, which is controlled by Brigade 6 of the Karen National Union. Dozens of activists were arrested as it provoked further instability as clashes took place with the Karen National Liberation Army.

According to the Karen Information Center, the junta was firing with large weapons at areas where they suspected the civilian defense forces to be hiding. Tensions had been building since 14 December, and forced several hundred civilians to begin fleeing. Thousands more began fleeing ongoing attacks by the junta who were indiscriminately firing into nearby civilian areas. On 16 December, Karen rights groups reported more fighting broke out near Mae Taw Tha Lay. The regime has blocked key routes needed to transport urgently needed humanitarian aid.

In Kayah (Karenni) State, displaced villagers are distraught over more instability threatening their livelihoods. Ongoing conflict has made it impossible for them to work as the presence of soldiers has made locals fearful of going too far outside of their villages. Farmers have been unable to tend to their fields, and have lost opportunities to harvest food and sustain an income.

To make matters worse, the illegal junta continues to block key routes needed for the delivery of humanitarian aid to internally displaced people (IDPs). Places where civilians would typically take refuge, such as churches and temples, have been taken over as military base camps. As the cold weather begins, IDPs have no choice but to seek safety and shelter in the jungle where living conditions are harsh.

According to the Karenni Civil Society Network, the junta has destroyed nearly 400 buildings in Kayah (Karenni) State.  Between 22 November and 5 December, almost 1500 fled fighting in the State.

More than 100 homes were set on fire by the military junta in Sagaing region’s Ayadaw Township on 13 December. The deliberate arson attack forced hundreds of villagers to flee, who returned to find approximately 100 homes completely scorched and devastated by the fires. The junta continues to target those affiliated with the pro-democracy movement, including those involved with the People’s Defense Forces. Soldiers reportedly also abducted two men, and destroyed a school.

Artillery firing was also aimed at the village. Food that was in the homes was eaten by the soldiers. Villagers that returned to their demolished homes recoiled from their losses, which had already been deeply strained by the impacts of the failed coup and increasing militarisation.  In another worrying series of events, a citizen journalist reporting on the situation in Sagaing region was arrested and has not been heard from since.

Bodies of three men who returned to their village after fleeing clashes were caught and shot at close range were killed by the military junta. A villager commenting on the indiscriminate killings said: “Those soldiers are not even human anymore. They only know to kill all the men they see.”