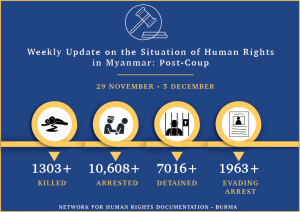 Ten months have now passed since the attempted coup in Myanmar. In the time that has elapsed, horrifying rights abuses have been perpetrated against local people who have exemplified a spirited resistance to the junta. The regime is armed with weapons and uses force as a fear mongering tactic. Civilians have what the military lacks –  which is a moral compass that propels them forward amidst the difficult new realities on the ground.

The National Unity Government (NUG), a government of and for the people, has been offering the international community multiple pathways for dialogue and interaction, as to not legitimize or recognize the illegal junta. At the United Nations, civil society organizations, alongside the NUG, have been vocal in their demands that a junta representative must not be granted a seat. Over the last week, the nine member Credentials Committee of the General Assembly, which is the body responsible for approving UN representatives, decided to refer a decision on who will be selected to speak for Myanmar, as well as Afghanistan. This in effect means that U Kyaw Moe Tun, who was appointed by the National League for Democracy (NLD), will continue to be the permanent representative for the time being. This step was welcomed by the NUG, though the military junta not surprisingly criticized the UN for denying its envoy.

Pressure on the Association of Southeast Asian Nations (ASEAN) to not recognize the junta remains. Cambodia will become the chairman of ASEAN beginning in 2022. Cambodian Prime Minister, Hun Sen, invited the junta appointed foreign minister, Wunna Maung Lwin to a meeting in the next week.  The decision has spurred suspicions that Cambodia will not take a hardline against Myanmar’s assaults and violent suppression of human rights in the country.  A new report released by the ASEAN Parliamentarians for Human Rights (APHR) found that of the ‘dramatic rise’ in attacks against opposition Members of Parliament, those in Myanmar were the worst and were an ‘example of a wider trend of closing democratic space in the region.’ The NLD’s Central Working Committee reported that over 570 NLD party members have been detained since February. Only 128 of those detained have been released, and 432 remain in custody.

The urgency for the international community to intervene with concrete action such as targeted sanctions and a global arms embargo is growing every day.

According to the Chin Human Rights Organization, over 200 more homes were destroyed over the course of five days between 25 and 29 November. More than 473 structures have been intentionally destroyed by the military junta in Thantlang. Satellite tools and mapping resources by Human Rights Watch detected several thermal anomalies over Thantlang, Chin State, on at least 10 different dates in the past month, during the day and at night. Evidence suggests these fires were deliberately set by the military junta. Photos circulated online showed the mountainous town disappearing as homes, villages and land are being intentionally burnt to the ground.

Religious freedoms, freedom of mobility and the right to safety, shelter and protection are all being undermined as the junta commits war crimes with impunity.

In Kachin State, the presence of the military junta is continuing to undermine civilian safety. An IDP camp and church in Momauk, Kachin State, was damaged after it was shelled by the military junta. More human rights violations followed, with thirty civilians being abducted to be used as human shields while soldiers patrolled the town. Locals were taken from the market, schools and hospitals to guide the junta. Women and children were among those in the regime’s custody.  All detainees were released later in the evening.

Bomb blasts in recent days in Kachin State have led to injuries. At a high school in Hpakant, six people were hurt when a school bus struck a landmine. Very few students have dared return to school as instability wreaks havoc in the region and sparks fears. Soldiers have also taken to patrolling classrooms.

On 30 November, the Kachin Independence Army ambushed a junta convoy with a landmine in Mohnyin Township, Kachin State. In retaliation for the at least seven soldiers killed in the attack, the junta launched an artillery attack and shelled a local village. Three homes were damaged and livestock was killed by the shells.

Over 30,000 residents from 15 villages in Sagaing region were forced to flee airstrikes fired by the military junta. Five helicopters by the regime were used to send additional soldiers to fight the local People’s Defence Forces (PDF). The attack was in retaliation for heavy casualties faced by the junta. Witnesses recalled the helicopters firing ‘at anyone they could see.’

Soldiers also set fire to 20 homes and two barns in Kalay Township. The junta targeted homes that they believed had occupants with ties to the PDF.

An additional five displaced civilians were killed by the junta as soldiers raided villages and refugee camps in Gangaw township, where hundreds of troops have been deployed.  A series of serious human rights violations are being deployed including torture, sexual harassment and arson. The increasing military presence has been devastating for innocent people caught in the crossfire.  An arms embargo must be immediately enforced.

Junta soldiers massacre and burn 11, including teenagers, during raid on village...
Scroll to top