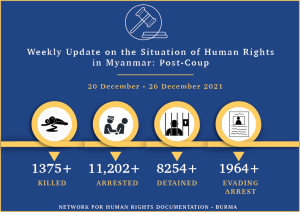 During the holiday season, the people of Myanmar have been denied peace and protection in their homelands. Across the country, the military junta continues to terrorize the civilian population through unlawful arrests, abductions, torture and murder. No one feels safe.

In Karen State, clashes have been intensifying since 15 December between the Karen National Liberation Army and the Myanmar military. The onslaught of air and ground attacks forced over 10 000 villagers in Lay Kay Kay, Karen State to flee the junta’s relentless offensives. Internally Displaced Persons (IDPs) are in urgent need of food, shelter, warm clothing and refuge where they are free from the looming possibility of more assaults.

According to Karen rights groups, tensions began to rise when the regime entered Lay Kay Kaw, a town controlled by the Karen National Union (KNU) and arrested over a dozen people, including an elected Member of Parliament and human rights defenders. When the KNU rightfully intervened to safeguard their people and communities, the junta responded by firing over 100 artillery shells and indiscriminately fired into the town. Many buildings and homes were destroyed.

At least 6900 people have been displaced since December 15 and over 4000  have taken refuge in Thai soil, according to ND-Burma member, the Human Rights Foundation of Monland. HURFOM urged the UN to designate a “no-fly zone” in all ethnic areas, including recent armed conflict in Karen, fighting centered around the town of Lay Kay Kaw. Those who have been displaced on the border and inside Thailand must be protected and provided with urgently needed humanitarian aid.

These attacks, in addition to being crimes amounting to war crimes and crimes against humanity, are also in violation of the 2012 ceasefire. The breaking of the ceasefire is not surprising. The Myanmar military has regularly forfeited agreements in pursuit of their own invested interests and in doing so has spurred further distrust.

Innocent civilians living in areas where the junta has increased their armed presence are at risk of being killed by soldiers. The Karen Women Organization (KWO) strongly condemned a fatal attack against a 56 year old woman who was working on her farm with her husband when the Burma Army Battalion, LIB 101 along with five soldiers from the Border guard Force approached. Her husband fled, leaving her alone and terrified. She was asked where the KNLA soldiers were and when she replied she did not know, her nose was broken. She was then shot in the mouth and killed. KWO explained that this case was not isolated – rather one of many indicative of the rising assaults against women and civilians across the country.

As rights groups including ND-Burma have documented throughout the year, human rights violations in Myanmar are sysmatic, widespread and ongoing. They are being perpetuated endlessly through a cycle of impunity, emboldened by the international community’s lack of action. A global arms embargo is imperative to stopping the junta’s access to murderous weapons which are used to indiscriminately kill. Further, a referral to the International Criminal Court would send a critical message to the Myanmar Army which makes clear – no one is above the law and those who commit human right atrocities will be held accountable.

CHIN STATEThe Chin Human Rights Organization (CHRO) has reported ongoing offensives and militarization in Chin State. Since 1 February, the strength of the resistance movement has highlighted the emergence of a new, young and brave movement of people committed to the Spring Revolution. Religious buildings continue to be targeted, especially churches, which is the religion of the majority of Chin people. According to CHRO, two youths (age 16 and 18) were arrested while visiting a prayer mount on Christmas Eve that the junta has turned into a strategic sentry post. One of the young people abducted is feared to be in critical condition from torture in interrogation.

CHRO has also documented a rising number of COVID-19 cases which are adding to the stress of already worried civilians.

Over thirty refugees including women, children and the elderly were burned alive in Hpruso Township, Kayah (Karenni) State. The Karen Women’s Organization was among the civil society organizations to condemn the atrocities by extending solidarity and support. State media falsely alleged the innocent civilians killed were ‘terrorists’ in yet another lie in the regime’s sweeping fabrications and cover-ups of the atrocities happening on the ground.
Twenty houses in Kayah (Karenni) State were also destroyed in Loikaw by the junta, according to the Karenni Nationalities Defense Forces, following clashes earlier in the week. Civilians who lost their homes also lost valuable possessions, food and money. Over 150 000 have been internally displaced in Kayah (Karenni) State.

Magway Township continues to be targeted by the junta. Nearly two dozen people were killed when the junta used airstrikes against Hnan Khar village in Magway region’s Gangaw Township. The victims were soldiers and innocent civilians, though an exact count could not be confirmed. Attempts from people trying to retrieve bodies were shot at.

As a result of the clashes, many people tried to flee. Witnesses to the attacks who were trying to flee said that elderly people had to be carried since they could not walk or run.

At least 61 civilians killed this month in clashes in Myanmar’s remote border...
Scroll to top