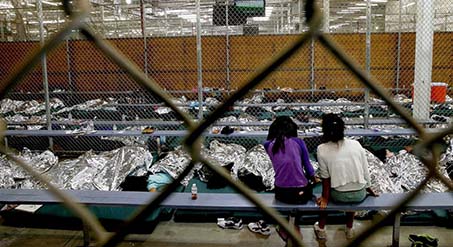 Four years as the U.N. high commissioner for human rights have brought me many luminous encounters and desperate struggles, much painful and shocking information, and some profound lessons that may take many years to fully assimilate.

I have constantly circled back to the drafting of the Universal Declaration of Human Rightsin 1948, where this story truly began. It was a time of slaughter and terrible suffering, with broken economies and nations emerging from the ashes of two global wars, an immense genocide, atomic destruction and the Great Depression. Finding solutions that could ensure global — and national — peace was a matter of the starkest kind of survival. Committing to the U.N. Charter and the Universal Declaration of Human Rights was crucial. They were not philosophical goals: This was life or death.

There could be no peace without justice. There could be no durable development without promotion of broad social progress and better standards of life, for all, in larger freedom. The men and women who survived the two world wars understood this utterly. It was in their bones.

Treaty by treaty, world leaders built a great body of laws and covenants and committed to upholding them. Today there is a great cynicism about the global order they constructed — never fully global, never very orderly — but although it may have been partial, the progress they ensured was immense.

But that generation is departing quickly, and with them the living memory of the lessons that were so painfully clear to them. Now, rather than advancing toward greater freedom, justice and peace, the world is going backward — to a landscape of increasingly strident, zero-sum nationalism, where the jealously guarded, short-term interests of individual leaders supplant and destroy efforts to find common solutions.

We are moving backward to an era of contempt for the rights of people who have been forced to flee their homes, because the threats they face there are more dangerous even than the perils of their voyage. Backward to a time when military operations could deliberately target civilians and civilian sites such as hospitals, and chemical gases were openly used for military purposes and against innocent families.

We are moving backward to an era when racists and xenophobes deliberately inflamed hatred and discrimination among the public, while carefully cloaking themselves in the guise of democracy and the rule of law. Backward to an era when women were not permitted to control their own choices and their own bodies — when criticism was criminalized and human rights activism brought jail, or worse.

This is the way that wars are made: with the snarl of belligerence and the smirk of dehumanization; the lash of injustice and the incremental erosion of old and seemingly wearisome checks. The path of violence is made up of the unreckoned consequences of banal, incidental brutality seeping into the political landscape.

Here is one lesson: Intolerance is an insatiable machine. Its wheels, once they begin to function at a certain amplitude, become uncontrollable — grinding deeper, more cruelly and widely. First one group of people is singled out for hatred; next it will be more, and then more, as the machine for exclusion accelerates into violence, and into civil or international warfare — feeding always on its own rage, a growing frenzy of grievance and blaming. As that tension begins to peak, no obvious mechanism exists that is capable of decompressing and controlling its intensity, because the machine functions on an emotional level that has very little contact with reason. Release may come only after tremendous violence. This is something those of us who work for human rights have witnessed time and again.

We are at a pivotal moment in history, now, as contempt for human rights spreads. Xenophobes and racists have emerged from the shadows. A backlash is growing against advances made in women’s rights and many others. The space for civic activism is shrinking. The legitimacy of human rights principles is attacked, and the practice of human rights norms is in retreat.

What we are destroying is, quite simply, the structures that ensure our safety.

The destruction of Syria is a murderous parable, written in blood, that brings home yet again that horrific spiraling of incremental human rights violations into absolute destruction.

The organized campaigns of violence against the Rohingya in Myanmar – Southeast Asia’s fastest-growing economy in 2016 — yet again reminds us that economic growth will never maintain peace and security in the face of biting discrimination. In 2017 — 2017! — we once again saw the specter of genocide, and once again, we did very, very little to stop it from happening.

So, in a sentence, what is the one core lesson that has been brought home to me by this extraordinary, privileged, crushing mandate as high commissioner?

It is that in every circumstance, the safety of humanity will be secured only through vision, energy and generosity of spirit; through activism; through the struggle for greater freedom, in equality; and through justice.

The United States is Quitting the UN Human Rights Council. Here’s Why That’s...
Scroll to top