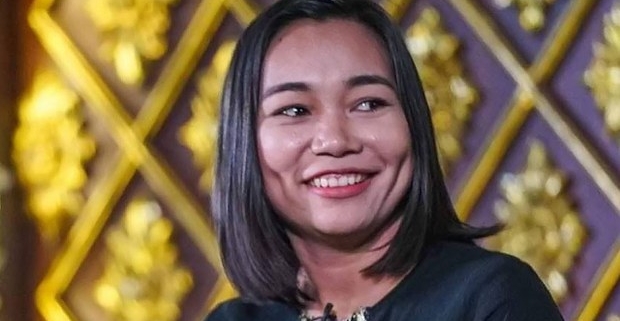 The freelance journalist faced charges of ‘incitement’ and ‘illegal association’ for her reporting.

A special court in Myanmar on Thursday sentenced Htet Htet Khine, a former BBC television presenter, to three years in prison with hard labor for “incitement” and “illegal association” for her reporting work, according to family members and her legal team.

The face of BBC Media Action’s national television peace program Khan Sar Kyi (Feel It) from 2016 to 2020, which documented the impact of war on Myanmar society, the freelance journalist and video producer had been in detention in Yangon’s notorious Insein Prison awaiting trial since Aug. 15, 2021, when she was arrested with fellow reporter Sithu Aung Myint.

A lawyer representing Htet Htet Khine, who spoke on condition of anonymity citing security concerns, told RFA Burmese that she accepted her sentence with little emotion at the conclusion of her trial in the prison courtroom on Thursday.

“She bravely faced the case that was filed without any evidence,” he said.

“She was accused of inciting a situation that was already under control. The order was handed down based on the plaintiff’s testimony.”

The lawyer said that his client is “in good health” and “stable.”

A family member, who also declined to be named, told RFA that Htet Htet Khine and Sithu Aung Myint were “unjustly accused” and called for the court to free them.

“I already expected this [outcome]. They were wrongly arrested and I want them to be released as soon as possible,” the family member said.

“[The judges] unjustly sentenced her to three years imprisonment.”

“She has been in jail for more than a year now and I worry about her,” they said.

“As a family member, I am worried about her health because inmates are extremely vulnerable to COVID-19.”

Reacting to Thursday’s sentencing, veteran journalists told RFA that reporters must subject themselves to serious personal risk to carry out their work under military rule in Myanmar.

Myint Kyaw, the former secretary of the Myanmar Press Council, said the threat of arrest has had the biggest impact on press freedom in the country since the coup.

“The work has become dangerous. [The junta] pressures journalists politically,” he said.

“Reporters can be arrested and sent to prison simply for writing a story that they don’t like.”

“Reporters are being forced to develop contacts on Facebook because of the risk of arrest associated with reporting on the scene,” he said.

“There is a limit to the objectivity they can maintain because of this. It’s more challenging to publish balanced reporting than ever.”

“Nowadays, reporters are being imprisoned under anti-terrorism laws,” he said.

“When a reporter gets a tip about a development, they are going to contact the source. You have to communicate with that person, regardless of who they are. So when reporters call PDF sources, the junta can arrest and charge them this way.”

Zay Tai added that journalists are now targeted for doing their work out in the open.

“In the past, a reporter could go around town with a camera around their necks, but that’s no longer the case,” he said. “Now they have to rely on citizen journalists and freelancers, because of the risks of reporting from the field.”

BBC Media Action Myanmar released a statement at the time confirming her arrest and expressing concern for her safety.

Sithu Aung Myint remains in detention awaiting trial on charges of “incitement” and “sedition,” for producing content authorities say was critical of the military. He faces up to three years in prison for the first charge and up to 20 for the second.

Sithu Aung Myint’s lawyer said in April that the journalist and others had been denied access to medical care by authorities while in custody.

According to Detained Journalists Information Myanmar, a media watchdog group, at least 142 journalists have been arrested in the 19 months since the coup, 95 of whom have been prosecuted under various sections of the country’s penal code.

The junta has previously denied targeting journalists for their reporting work.

This story has been updated to clarify that Htet Htet Khine was the face of the BBC Media Action’s national television peace program Khan Sar Kyi and to include comments from veteran journalists about the state of media freedom in Myanmar.