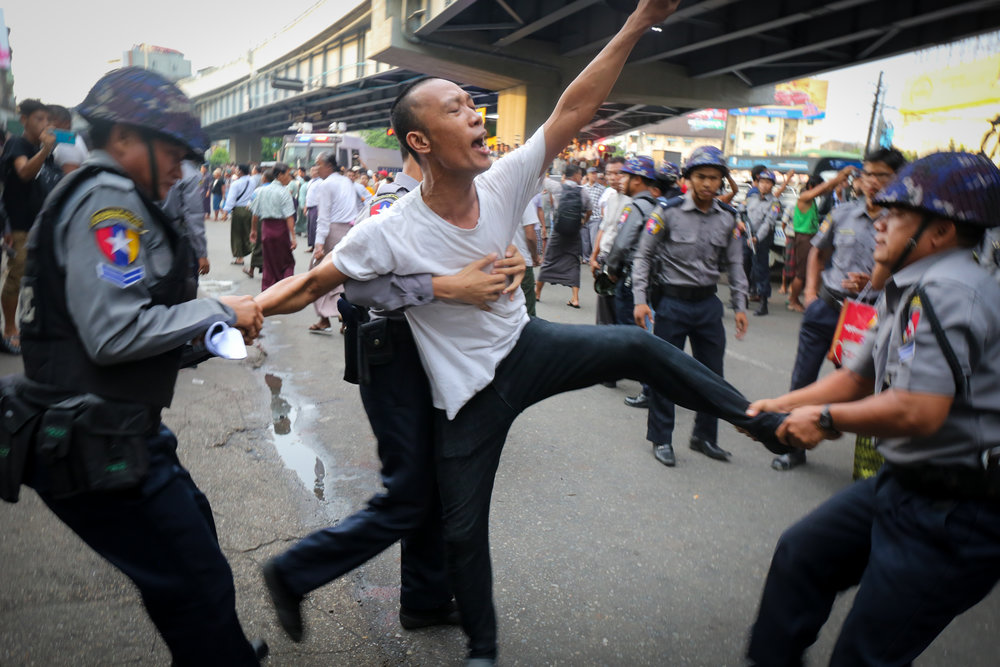 Seeking justice in Burma
May 2018

Intense fighting continues in Kachin State trapping civilians in conflict zones and spawning anti-war movement across the country; Panglong delayed and Karen ceasefire in danger; intentional organisations continue to mull action over Rakhine; and ND-Burma talks to surgeon and former political prisoner Ma Thida about the need for a reconciliation law.

Fighting continued between the military and Kachin Independence Army (KIA) in northern Burma, with 10,000 people becoming newly displaced since early April. A security analyst notedthat this has been the heaviest onslaught by the military since the KIA took up arms in 1961.

A youth-led anti-war movement began to take shape in Kachin State and a peaceful protest of about 5,000 people was held in the Kachin capital Myitkyina. Protesters called on the government to rescue civilians trapped by the conflict and address their urgent humanitarian needs. Three protesters were charged with defamation under Article 500 of the Penal Code after detailing military assaults and and are awaiting sentencing. Kachin activist Stella Naw suggested the Kachin chief minister take a number of concrete actions – such as personally intervening in the cases of arrested protesters – to demonstrate solidarity with his constituents.

A support protest was held in Yangon on 12 May, despite authorities having denied permission earlier in the week. Riot police broke up the demonstration with batons and seventeenorganisers of the protest were arrested. They were  charged with disturbing the public and holding a protest without permission; eight have written a letter to the President and State Counsellor urging them to take action against police for violent behaviour.

Some 42 people have reportedly been arrested across the country for participating in anti-war protests.

KWAT, 4 May: UN Security Council must act to end ongoing crimes against humanity in northern Burma

The 21st Century Panglong Peace conference was postponed for a fourth time until an unspecified date in June. The delay is reportedly a result of tensions between the military and KNLA in Karen State, as well as the military’s blocking of state-level political dialogues led by NCA (Nationwide Ceasefire Agreement)-signatories in the run up to Panglong sessions. The military has blamed armed groups for the delay, while armed groups have blamed the military.

China urged the Northern Alliance, a group of non-signatory armed organisations accounting for some 80% of non-state armed troops in Burma, to join the next session of Panglong. A representative from the United Wa States Army said the Northern Alliance  would attend if all groups were invited and allowed to join as official representatives as opposed to observers. Meanwhile the government has been holding talks with the Karenni National Progressive Party (KNPP) on signing the NCA.

Two trenchant opinion pieces dismissed the Panglong peace process as defunct. Bertil Lintner criticised Daw Aung San Suu Kyi’s refusal to deviate from the military’s policy of demanding groups sign the NCA before political dialogue can be held, and pointed out that while “small and largely insignificant groups” sign the NCA, troop numbers of non-signatory organisations are swelling. David Scott Mathieson meanwhile argued that “peace is war” in Burma, with the peace process being a cover to sustain conflict and sow divisions among ethnic armed groups.

Karen ceasefire signatory warns it will fight back if army continues to violate accord;
93 refugees repatriated from Burma to Thailand

The Karen National Liberation Army (KNLA) released a statement warning that they would be forced to fight back if the military continued to violate the terms of the NCA. Government soldiers have been building a military road without permission in Karen State since March, causing clashes and pushing locals to flee.

Meanwhile 93 Karen refugees were repatriated from Thailand to various locations in Burma.

An attack by the Ta’ang national Liberation Army (TNLA) on a government security post in northern Shan State resulted in the deaths of 19 people, including 15 civilians. A TNLA spokesperson said the attack was a retaliation for military attacks on their temporary jungle camps, as well as a move in support of their ally the KIA.

Villagers in Chin State accused Arakan Army soldiers of torturing administrative officials and Christian preacher before making off with 6.7 million kyats (approx. 5,000 USD) stolen from a number of villagers.

The army rejected a request by the UN Security Council to investigate allegations of human rights abuses in Rakhine State. The request came following a four-day visit to Burma and Bangladesh by the UN delegation.

Judges at the International Criminal Court (ICC) will discuss whether to launch a probe into the forced exodus of hundreds of thousands of Muslims from Burma. The closed door talks will take place on 20 June and follow a request by the ICC’s Chief Prosecutor Ms Fatou Bensouda to rule on whether the court could investigate the deportations as a crime against humanity. While Burma is not a signatory to the Rome Statute, which underpins the ICC, Bangladesh, which is hosting the displaced, has signed the accord, leading Bensouda to argue that the court has jurisdiction to investigate the deportations.

UN agencies and Burma agreed on a text outlining cooperation on the repatriation of refugees from Bangladesh, including the granting of access to areas previously off limits for international organisations.

The US House of Representatives approved measures that call for targeted sanctions against Burmese military figures responsible for human rights abuses, while the European Unionadopted a ‘legal framework’ for targeted sanctions. A handy infographic from Burma Campaign UK, presented to the UK Parliament, showing what restrictive measures against Burma are currently being supported by the EU and the UK:

The government has said it is preparing a history of Muslim migration to Rakhine State. The Minister of Religious Affairs and Culture has said the text, which is still being written, will show that “Rohingya has never existed among the over 100 ethnic races of Myanmar.”

An investigation by Amnesty International found that Arakan Rohingya Salvation Army (ARSA) militants were responsible for killing Hindus in Rakhine. Amnesty said the full extent of human rights violations committed by both the military and ARSA would not be known until the government granted human rights monitors access to Rakhine.

Government soldier charged with murder of villager in Mon State

A soldiers in Mon State has been charged with the murder of a male villager in Mon State. The victim was killed after being summoned to the local military base following a dispute he had had with his father-in-law, who had reported the fight to the army.

A human rights activist was sentenced to three months in jail for live-streaming an anti-war play performed by high school and university students. He was charged under Article 66(d) of the Telecommunications Law after live-streaming the performance in January this year.

Ma Thida: “Without identifying the wound, how can we heal the wound?”

ND-Burma sat down with surgeon, writer, human rights activist and former political prisoner Ma Thida (Sanchaung) to discuss the the need for a reconciliation law, why development is not enough to relieve grievances, and how five decades of dictatorship have made everybody into a criminal. Full interview here.

Photo: Ma Thida at her home in Sanchaung, Yangon / ND-Burma

Justice in Burma: Wounds on the Wall

ND-Burma wrote a piece for Oxford University’s Tea Circle blog entitled ‘Justice in Burma: Wounds on the Wall’, looking at how a museum run by former political prisoners showcases the lasting impact of state brutality on Burmese society.

Former political prisoners called on the government to open hospitals catering to their needs, including the provision of free medical check-ups. The Myanmar Times ran a piece on female women political prisoners and their ongoing struggles after release.

683 people have reportedly been removed from the government’s blacklist under the NLD’s tenure in government. This includes over 400 non-Burmese citizens.

The Four Eights People’s Party, made up of former students who took part on in the 1988 uprising, received over 100 objections after announcing the party name, emblem and flag in the state-owned newspaper. The nascent party has been facing opposition to its name, with some activists accusing the party of having ‘usurped’ the 8888 name.

The UN Special Representative of the Secretary-General for Children and Armed Conflict made a three-day visit to Burma and said in her concluding press conference that more needed to be done to fully implement the 2012 Joint Action Plan to end recruitment of child soldiers. She criticised the government for sometimes taking years to respond to requests for information.

Two farmers were shot and hospitalised after police forcibly evicted them from disputed land. A court had recently ruled in favour of the military company Myanmar Economic Corporation in this land dispute case, charging 33 farmers who had been cultivating the land with trespassing.

State media reported that 4,900 acres of land had been returned to 532 farmers in Sagaing Region.

Justice in Burma: Wounds on the Wall