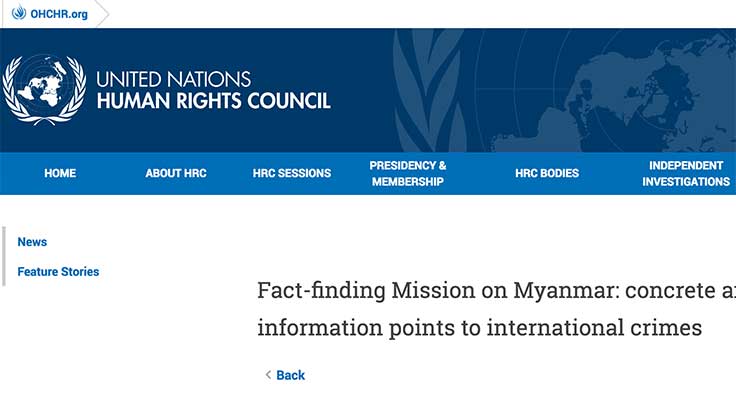 GENEVA (12 March 2018) – Experts of the UN Fact-finding Mission on Myanmar called on Myanmar authorities Monday to stop dismissing reports that serious human rights violations have been committed in Kachin, Shan and Rakhine states.

“The body of information and materials we are collecting is concrete and overwhelming,” the three experts of the Independent International Fact-Finding Mission on Myanmar noted in their interim, oral report to the 37th Session of the UN Human Rights Council.

“It points at human rights violations of the most serious kind, in all likelihood amounting to crimes under international law.”

Marzuki Darusman, former Indonesian Attorney-General and chair of the Fact-Finding Mission, delivered the oral report. He was joined on the podium by fellow experts Radhika Coomaraswamy of Sri Lanka and Chris Sidoti of Australia.

The interim report was based on information gathered from a series of missions to Bangladesh, Malaysia and Thailand, where teams of investigators conducted over 600 in-depth interviews with victims and witnesses of reported human rights violations and abuses. The teams have also collected and analysed satellite imagery, photographs and video footage of events.

“The events we are examining in detail in Rakhine, Kachin and Shan states are products of a longstanding, systemic pattern of human rights violations and abuses in Myanmar,” report said.

“Any denial of the seriousness of the situation in Rakhine, the reported human rights violations, and the suffering of the victims, is untenable,” the experts said. “We have hundreds of credible accounts of the most harrowing nature.”

The report listed eight major findings in relation to allegations in Rakhine State where so-called “clearance operations” of the Myanmar security forces, in response to ARSA (Arakan Rohingya Salvation Army) attacks, have driven nearly 700,000 Rohingya refugees into Bangladesh since August.

“Credible accounts are rife of the State’s various security forces having committed gross human rights violations in the course of these operations,” the experts said.

“These operations resulted in a very high number of casualties,” the report said. “People died from gunshot wounds, often due to indiscriminate shooting at fleeing villagers. Some were burned alive in their homes – often the elderly, disabled and young children. Others were hacked to death.”

Satellite imagery shows that at least 319 villages were partially or totally destroyed by fire after the “clearance operations” began on 25 August 2017.

“We have hundreds of eyewitness accounts. We have seen unsettling photographs and satellite images of Rohingya villages flattened to the ground by bulldozers, erasing all remaining traces of the life and community that once was,” Darusman said on the margins of the Council meeting, “not to mention destroying possible crime scene evidence.”

“All the information collected so far points to violence of an extremely cruel nature,” the report said. “We have ample and corroborated information on brutal gang rapes and other forms of sexual violence against women.”

“We have numerous accounts of children and babies who were killed, boys arrested, and girls raped.”

“The widespread and systematic nature of the State-led violence,” the report added, “points to prior planning and organisation, which we are examining in detail.”

“We are analysing the respective roles and command structures of the security forces and the involvement of others… We will attribute responsibility where it is due.”

The report highlighted the Fact-Finding Mission’s concerns over a spike in reported human rights violations and abuses and violations of international humanitarian law in Kachin and Shan states. These resulted in significant displacement of population, further exacerbating a “longstanding humanitarian crisis.”

“Regarding the Myanmar military, we are receiving credible reports of indiscriminate or disproportionate attacks, extrajudicial killings, arbitrary deprivation of liberty, enforced disappearances, destruction of property and pillage, torture and inhuman treatment, rape and other forms of sexual violence, forced labour, and the recruitment of children into armed forces,” the report said.

Appointed by the UN Human Rights Council last March, the Fact-Finding Mission accepted a mandate to “establish the facts and circumstances of alleged human rights violations by military and security forces, and abuses, in Myanmar.” Their focus is on the States of Rakhine, Shan and Kachin since 2011.

The Myanmar Government has refused to give the Fact-Finding Mission access to the country and it has blocked attempts to mount an independent and impartial investigation.

Darusman noted that the representative of Myanmar has alluded to a suppression of the “Myanmar narrative.” He responded that the Fact-Finding Mission is ready to hear that narrative, but regardless “we have no shortage of credible information.”

The final report of the Fact-Finding Mission will be presented to the Human Rights Council in September.