Myanmar’s largest city is in the middle of a full-blown public health crisis, as Covid-19 patients die at an unprecedented rate due to the unavailability of medical oxygen.

While official figures for the country are dire, with 3,461 new cases and 82 deaths on Sunday alone, the actual situation is far worse, according to social welfare groups in Yangon.

A volunteer with one organization said that it had received 40 requests for funeral services between Friday and Sunday. Most of the deceased had died of Covid-19 due to a lack of oxygen, he said.

According to another local group called Shin Than Khwint (“Right to Survive”), there were 50 deaths from hypoxemia in South Dagon in the first 11 days of July.

Shwe Thanlyin, another group that assists with final rites for the dead, said that since last Friday, it has handled five more funerals than its usual 15 per day to help families cope with Covid-19 deaths.

Myanmar Now attempted to contact cemetery and municipal government officials responsible for Covid-19-related funerals to confirm these numbers, but its calls went answered.

At a press conference on Monday, junta spokesperson Brig-Gen Zaw Min Tun attempted to allay concerns about the surge in cases, claiming that military hospitals are prepared to deal with the third and deadliest wave of the pandemic.

What he ignored, however, was that the nation’s healthcare system has been all but paralyzed since February 1, when the military seized power in a coup that continues to sow chaos more than five months later.

Among the first to resist the junta were medical professionals at public hospitals, who refused to work under a military dictatorship. This led to the arrest of many who were at the forefront of the battle against the pandemic last year.

Last week, Myanmar reported its worst numbers since the peak of last year’s second wave. The latest death rates are now nearly double what they were in October 2020.

Even more disturbing is the infection rate—figures released by the Ministry of Health and Sport show that nearly a third of those tested for Covid-19 have been found to be infected. This is based on only 15,128 swab tests conducted on Saturday, but gives some sense of the magnitude of the challenges now facing an overwhelmed nation.

Social media has been awash in images and accounts of families desperately trying to track down oxygen and other medical supplies for ailing loved ones. Long lines have formed in Yangon and elsewhere, attesting to the scale of the emergency.

Shwe Thanlyin, which provides medical services for the living as well as funerals for the dead, said that it is receiving more than 300 calls a day from families in need of oxygen.

“We get so many phone calls, it’s like we have smoke coming out of our ears. Hardly a minute goes by without another call asking for oxygen,” said a spokesperson for the group.

Three large oxygen tanks that Shwe Thanlyin received on Sunday morning were empty within 30 minutes, as people flocked to its office in Dagon Seikkan from as far away as Hlaing Tharyar, Insein, and Ahlone townships.

“The important thing is to get enough oxygen. Most cases start with someone coming down with a fever and aching in the first few days, and right after that, their oxygen levels begin to drop. If we don’t give them oxygen in time, we lose them. We have a lot of cases like that,” the spokesperson explained.

A healthy person’s blood oxygen level is around 95%, and anything below 90% is seen as requiring medical attention. However, many patients say they have been turned away from hospitals even when they are clearly in need of assistance.

“According to some patients, there are hospitals that just send people away after a brief examination and others that won’t even let them in, saying they’re full. They’re even sending away the ones with oxygen levels lower than 90%,” said Than Than Soe, who heads South Dagon-based Shin Than Khwint.

Although Shin Than Khwint has a total of 80 oxygen tanks, many who come to the group for help have to wait up to three days to receive oxygen due to overwhelming demand, said Than Than Soe.

“To be honest, it’s been exhausting. It really takes a toll on us to have to keep saying ‘sorry’ to all those people who are so desperate,” she said.

People queue in the rain for oxygen in front of the Nwe Aye Mosque in Yangon’s Dawbon Township on July 12. (Photo: Myanmar Now)

Pushed to the brink

As demand for oxygen continues to climb, the junta has stepped in to ensure that it has complete control over the available supply, by prohibiting both private and state-owned producers from distributing to individuals.

While it denied rumours that it has “raided” oxygen-producing factories, the military said in a statement released on Monday that it has restricted sales of oxygen.

An employee of a state-owned factory located at the Thein Phyu shipyard in Botahtaung Township confirmed this, saying that the factory was under orders to supply the gas exclusively to Covid-19 centres run by the regime.

Unity, a privately-owned producer based in Yangon’s Shwepyitha Township, was similarly instructed not to sell oxygen to civilians after the military bought 62 of its 40-litre tanks on Sunday morning, a source there said.

Meanwhile, crowds continue to gather in hopes of acquiring some of the precious commodity, creating conditions that could actually make matters worse for those already at risk.

“We didn’t know who was or wasn’t infected,” said one man who had joined many others in trying to buy oxygen at the Naing oxygen factory on Sagaing Road in South Dagon.

“If even one person was infected, then we would all be infected. I was only there because I couldn’t stand to watch people around me suffer,” he added.

Volunteer groups say they are also finding it difficult to replenish their stockpiles.

“Right now, a large tank of oxygen will cost you 400,000 kyat [$243]. Even so, you won’t be able to buy it easily. I went to buy some as an emergency backup, but they said they were all out,” said a member of the Yangon Youth Covid Control Task Force.

“I don’t know if it’s because the military council told them not to sell to us anymore. I mean, we’re buying it with our own money, after all,” he added.

A resident of Myawaddy, a town on the Thai-Myanmar border, told Myanmar Now that the flow of oxygen from outside the country has also stalled.

“We can’t import oxygen tanks anymore. They said they were out of stock. We have to wait until the end of the month, even if we order direct from Bangkok,” he said.

All of this has left little room for hope in the near future, as the situation continues to deteriorate in the face of the unchecked spread of a deadly disease and ongoing oppression by a regime that has pushed the country’s people to the brink.

“We survived the first and second waves, but I’m starting to think we’re not going to make it out alive this time. Even if the disease doesn’t kill us, the despair will,” said Shin Than Khwint’s Than Than Soe. 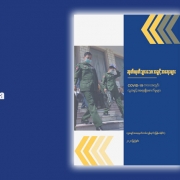 ‘Rights in Reverse,’ Details Human Rights Violations Against the Backdrop of Conflict & the COVID-19 Pandemic 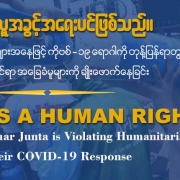 Weekly Update on the Situation of Human Rights in Myanmar Post-Coup (July 5...