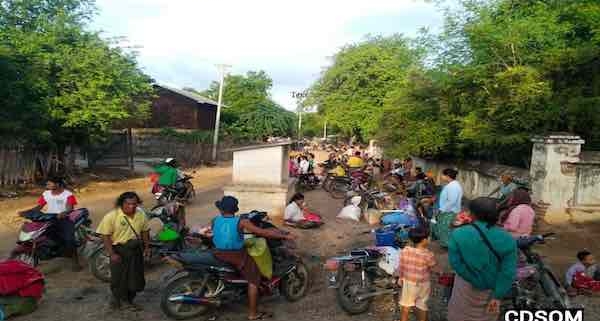 Regime forces killed a civilian and a member of a local People’s Defence Force (PDF) during a raid on a village in Sagaing Region’s Myaung Township late last week, according to resistance sources.

The raid, carried out by a military column of around 100 troops, began early Thursday morning, when Na Bet, a village located about 10km southwest of the town of Myaung, came under heavy artillery fire.

The bodies of the two victims were discovered the next day, said Nway Oo, the spokesperson for the Civil Defence and Security Organisation of Myaung (CDSOM), a coalition of local resistance groups.

“We managed to get the body of the PDF member back, but we couldn’t retrieve the body of the civilian as it was in the middle of the village. The soldiers burned it as they left,” he said.

The junta column in question was said to be stationed in neighbouring Myinmu Township. It began its attacks in Myaung Township on Wednesday, forcing residents of the area to flee, local sources reported.

According to Nway Oo, the PDF member was scouting the area when he was captured after being spotted by the soldiers.

“He tried to flee by crossing the river, but the soldiers chased him in a boat. He was shot once in the head,” said the CDSOM spokesperson.

The dead PDF member was identified as 25-year-old Htet Wai Aung. The identity of the other victim could not be confirmed because he had been burned beyond recognition, according to Nway Oo.

On Friday, after leaving Na Bet, the junta column divided into two groups—one heading south towards the Kyauk Yit police station and the other north towards the village of Let Yet Ma, according to local sources.

The CDSOM urged civilians in southern Myaung Township to leave the area amid rumours that the military is going to carry out clearance operations there.

The group said that a total of seven people have been killed in the township since the beginning of the month, including three who died after a camp for displaced civilians in the village of Zee Kyun came under heavy artillery fire on September 1.

AN OPEN LETTER FROM 567 CIVIL SOCIETY ORGANIZATIONS CALLING FOR LEADERS OF THE...
Scroll to top