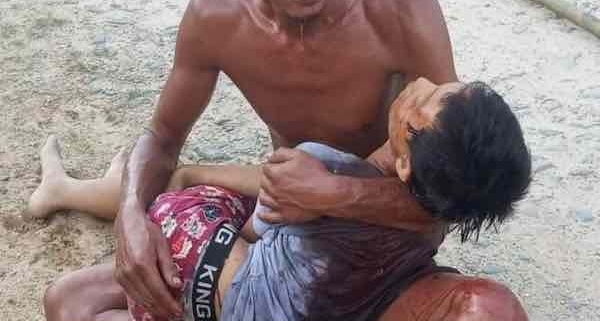 A junta column fires artillery into a village in the attempted advance, but loses more than 20 soldiers to an ambush on its boats, a resistance spokesperson says

A nine-year-old boy was killed when the Myanmar army fired heavy artillery into a village along the Ayeyarwady River last week in Kachin State’s Shwegu Township, according to a member of the resistance.

On September 22, a unit of some 100 soldiers from the junta’s Infantry Battalion (IB) 78—under the supervision of Light Infantry Division 88—attempted to cross the river in boats from the village of Kyun Taw to Moe Sit, on the opposite bank, when they came under attack.

The Kachin People’s Defence Force (KPDF) chapter from the town of Myohla, more than 20 miles northwest of Moe Sit, ambushed the column from their position in the village at around 2pm. The military forces still in Kyun Taw responded by firing artillery in the direction of the resistance.

Several of the junta’s shells hit the village of Moe Sit, killing nine-year-old Zwe Naing Moe. A Myohla KPDF spokesperson told Myanmar Now that the boy was hiding when he was hit by one of the blasts.

Four other civilians were reportedly injured in the attack, including a local teacher who lost his leg. Further information about the villagers who were wounded was not available at the time of reporting, as most of Moe Sit’s residents had fled. At least one home was also burned down.

During the one-hour battle, the resistance forces destroyed multiple boats and killed an estimated 27 soldiers, according to the Myohla KPDF spokesperson.

“[The military] fired both automatic weapons and heavy weapons as soon as they started crossing the river and we managed to sink three of their ferries. So many of them died although some jumped into the water, swam away and escaped,” he said.
Shwegu_tsp.png

Map of Shwegu Township showing the locations of Myohla town and the villages of Kyauk Ta Lone, Kyun Taw and Moe Sit along the Ayeyarwady River

The IB 78 column had left the village of Kyauk Ta Lone in western Shwegu days earlier and had since been occupying Kyun Taw.

Starting on the morning of September 23, the remaining 80 junta troops based in Kyun Taw began searching homes in the village, causing more locals in the area to flee.

The Myohla KPDF withdrew from Moe Sit due to the proximity of the Myanmar army soldiers.

“The junta force is still inside the village [of Kyun Taw]. We decided to withdraw so that more villagers would not be harmed,” the resistance force’s spokesperson said.

Serious battles have also been taking place in Katha Township, located across the Sagaing Region border with Shwegu Township in Kachin State.

A resistance alliance led by the All Burma Students’ Democratic Front clashed with a junta unit from Light Infantry Battalion 309 near the township’s administrative centre on the same day as the heavy fighting along the Ayeyarwady River in Shwegu.