On Tuesday, the Chinland Defense Force–Kanpetlet announced via its Facebook page that it was to begin “taking action” against non-CDM civil servants in the Chin town of Kanpetlet.

The news, ambiguously reported across a range of third-party platforms, left many wondering if the CDF was pondering  what would have been a highly-controversial campaign of violence—it was not.

In fact, the group claims that it is devising the first practical and humane guidelines for resistance groups dealing with those on the wrong side of what it calls the “zero-sum game” of Burma’s current political climate.

Speaking to DVB, the CDF Kanpetlet’s Brigade Commander said that, in accordance with Chin customs and policies—and with the help of international and local human right specialists—the group has drawn-up a far-reaching plan to impose punitive measures on civil servants refusing to join the CDM movement.

“We recognize those doing CDM as the first warriors of the Spring Revolution. Now, military affiliates are putting pressure on them to stop associating with the CDM and return to work. We decided to make a precise policy for CDM and non-CDM civil servants, to support and punish them consistently. If we can cut off every opportunity for non-CDM civil servants, we will win this war,”

The resistance group says it is currently compiling a comprehensive list of the city’s civil servants—both those participating in the CDM movement, and those attending work under the junta. Once complete, the plan’s finer details will be provided on November 10, the commander said.

“The list will allow us to return CDM civil servants to their former position when we win this war. We will also continue giving job opportunities to their children. For the non-CDM, the opposite will be true. Both them and their children will lose opportunities, and they will be socially punished. They will write their own history,” he said.

Although the commander appears to emphasise non-violent approaches when dealing with non-CDM staff, the group draws the line at “military affiliates” who “pressure CDM staff to return to work”— a category that risks being “eliminated” if found guilty of intimidation after a CDF investigation, the commander said.

The group further hopes that its list will help facilitate a more immediate rebooting of the city’s civil service under its nascent Public Administration (PAF)— one of a number of autonomous administrative bodies being developed across Chin State—within which which it plans to protect and support the city’s CDM movement by prioritising the employment of CDM staff.

Administrators from the People’s Administration in nearby Mindat, last week told DVB that they were advising Kanpetlet after succeeding in reopening primary schools across the township.

As a result, the group is currently developing its “Sunday Education Program” for Kanpetlet’s children, who due to COVID-19 and the coup, have been out of education for almost two years. As with Mindat, CDM teachers will be key to the scheme’s success.

“I’m fearful that children, especially teenagers, may not want a proper education—they are now eager to hold weapons to fight against the junta. For now, we are thinking of starting with classes in mathematics and English, rather than rolling out a full course of education,” the commander said.

Chin’s PAFs have so far proven a remarkable success story, providing the inspiration for a recent mushrooming of autonomous township administrations across Burma.

This success has in part been driven by the state’s almost total resistance to military control: at the start of the revolution, 80 percent of Chin State’s civil servants joined the CDM, putting a complete halt on the operations of the junta’s administrative machinery. Later, however, the military’s ruthless crackdown on CDM staff created cracks in the unity of the movement.

Now, the commander says, one is either with the people or against them.

“There are only two things in this revolution: justice (dhamma) and injustice (adhamma). If we do not make a decisive decision, our enemy will; if we don’t lead, they will. We are not doing this for our own benefit— every religion fights unlawfulness and injustice. Those who support the military, who pressure those doing CDM, are standing for adhamma—we have to make precise decisions during the revolution, backed up with precise action.” 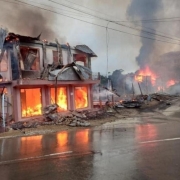