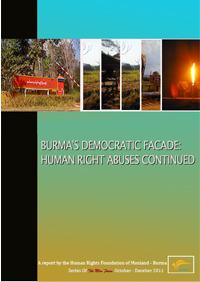 In Burma (also known as Myanmar), the new President Thein Sein (former Gen. Thein Sein) has attempted to move towards democratization or a democratic transition, by establishing a dialogue with pro-democracy leader Daw Aung San Suu Kyi and allowed her party, the National League for Democracy (NLD), to participate in the general elections.  In order to show a positive change, the government also released a small number of political prisoners.

However, the Burmese Army still operates military offensives against ethnic rebel groups in Karen State, Shan State and Kachin State whilst the government has conducted ceasefire talks. Human rights violations have continued in these areas and thousands of ethnic civilians continue to suffer from abuses committed by troops of the Burmese Army. [Download Report in PDF format] | [Map]