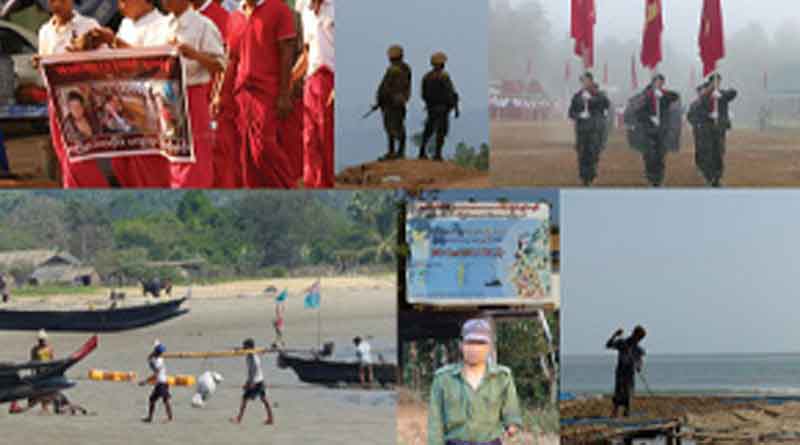 The 65-page report, “Invisible Lives: The Untold Story of Displacement Cycle in Burma,” focuses on the continuing concerns of the displaced ethnic nationality communities, particularly ethnic Mon, from Burma living along the southeast border and finds that the recent reforms have not yet addressed the causes of their displacement.

“The discriminatory policies of the successive military regimes and the previous Thein Sein-led Government, coupled with decades of armed conflicts waged against ethnic minority communities by the Burma Army have led to a devastating number of displaced and disenfranchised ethnic minorities along the southeast Burma,” said Nai Aue Mon, Program Director, Human Rights Foundation of Monland. “The new government led by the National League for Democracy (NLD) must work to guarantee that those who have survived decades of protracted displacement will not face secondary displacement upon their return to their origin by ensuring that political and economic reforms address the root causes of conflict and displacement,” he continued.

The “Invisible Lives” recalls the case of Mon refugees who were sent back to Burma in 1994 from Thailand, yet became IDPs on their return and have remained so for over 20 years. From their experiences, the report aims to shed light on lessons that can be learned from the past for all stakeholders involved in every stage of planning for the return of refugees and IDPs.

A visit by the State Counselor, Daw Aung San Suu Kyi to Thailand in July 2016 highlighted plans to repatriate the over 100,000 refugees from the Thailand-Burma border. However, the ongoing armed conflict in northern Shan and Kachin States, as well as related human rights abuses such as sexual violence, forced portering, routine use of torture and extrajudicial killing by the Burma Army signals the precarious and uncertain future of the peace process. In addition, the border-trade, land disputes and natural resource extraction as well as mega projects have the potential for renewing outbreaks of armed conflict in southeast Burma.

In addition, since political and economic reforms that began in Burma in 2011 and the triumphant victory of the NLD in the 2015 elections, donors have been shifting their priorities from along the Thailand-Burma border to inside the country. This has led to a further decline in aid and funding for ethnic service providers and community-based organizations (CBOs) who have traditionally supported the displaced and disenfranchised ethnic communities along the border.

“As the NLD takes the reins in furthering political and economic reforms in Burma, all parties must ensure that the efforts of the ethnic community organizations who have worked alongside their communities through challenging times are supported and advocated for, and not undermined,” said Khin Ohmar, Coordinator of Burma Partnership. “In order to find durable solutions for IDPs and refugees, all plans for repatriation and resettlement must ensure ownership and participation by IDPs, refugees and ethnic communities in all aspects of decision making,” she continued.

According to the findings of the report, since Burma opened its borders to foreign trade, increase in foreign investment and land confiscation has led to further violations of housing, land and property (HLP) rights across Mon State. The report found that the ongoing HLP rights violations continue to pose a threat to durable livelihood solutions in southeast Burma and must be addressed in any peace negotiations, including the upcoming 21st Century Panglong Conference. These violations, coupled with the continuing impunity of the Burma Army, presence of landmines, the fractured and exclusionary ceasefire negotiations and the absence of a sustainable political solution, has kept IDPs from returning to their place of origin.

“National reconciliation must include those who were victims of past human rights violations,” said Leena Zieger, International Coordinator and founder of Burma Link. “International donors and peace donors must ensure that their projects, particularly in ethnic areas, are transparent, accountable, and sustainable. The projects must address root causes of displacement linked to conflict and fundamentally support ethnic communities’ aspirations for equality, self-determination and the establishment of a genuine federal union,” she continued.

The report is based on interviews with Mon IDPs, villagers and victims of human rights abuses, representatives from civil society and international non-government organizations, ethnic armed organizations, and political parties.

Media Advisory: Launch of the Report “Invisible Lives: The Untold Story of...

Burma’s Covered Up War: Atrocities Against the Kachin People
Scroll to top