47 farmers are facing charges for trespassing on their own farmlands, seized by the Burma Army at Kho Lam, Namzarng township, where the Eastern Central Regional Command is located.

The criminal trespassing charges, under Article 447 of the Penal Code, have been brought by Burma Army Infantry Battalion (IB) 66, whose base lies directly east of Kho Lam, adjoining the seized lands.

The farmers are from Quarters 1, 2, 3 and 6 of Kho Lam town. They have been using over 400 acres of land east of the town to grow cash crops of corn, rice, sesame and peanuts, enabling them to earn an annual income of about 2 million kyat (over 1,400 US dollars) each. They have been threatened since August 2019 to stop using this land, with IB 66 posting signboards around the farms and later sending in troops to intimidate the farmers.

Military seizure of land around Kho Lam has been taking place since 1996-1998, when the Burma Army carried out a massive scorched earth program in central and southern Shan State, to crush the newly reformed Shan State Army (now the Restoration Council of Shan State/Shan State Army – RCSS/SSA).  The entire eastern half of Namzarng township was forcibly depopulated, with about 40,000 villagers driven at gunpoint into two main relocation sites on the main road, one of which was Kho Lam.

Thousands of villagers were driven into squalid makeshift camps around Kho Lam, where scores died – of disease and hunger, or killed by Burma Army troops when they tried to sneak back home to find food. Many fled to Thailand for survival, where they remain until today.

Since that time, the Burma Army began seizing thousands of acres of land to set up military bases around Kho Lam, due to its strategic location at a crossroads linking all parts of Shan State. In 2010, the Eastern Central Command was established in Kho Lam – the newest of the 14 Regional Commands in Burma, and the fourth in Shan State — overseeing 26 infantry battalions, tasked with occupying and controlling the same resource-rich areas of central and southern Shan State forcibly depopulated over 20 years ago.

Despite existing ceasefires, troops from the Eastern Central Regional Command have continued aggression against ethnic resistance forces, attacking RCSS/SSA camps and shelling IDP areas along the Thai border. They have also deliberately obstructed activities under the peace process: blocking community dialogues organised by the RCSS/SSA, blocking passage to attend peace meetings, and, most recently, blocking RCSS/SSA from carrying out Covid-19 prevention activities in villages.

This latest seizure of ethnic lands for military expansion is just another example of the Burma Army’s insincerity towards the peace process, and their contempt for the rights of local civilians.

We strongly condemn the Burma Army’s continued military expansion and land grabbing throughout the country, and demand that the unjust charges against these 47 farmers in Kho Lam be dropped immediately, and they be allowed to continue cultivating their lands without threats and harassment.

Details of the case against the 47 farmers in Kho Lam

The Burma Army first threatened to sue the farmers in August 2019. An officer from IB 66 called Captain Nyan Lin Htun called the farmers to the General Administration Department (GAD) office in Namzarng town on August 12, 2019, and asked them to sign documents that they were using land belonging to the military. However, the farmers refused to sign, as this would mean giving up their own claims to the land. Two of the farmers have 105 land title documents, but these are not being recognized by the military.

In August 2019, the military started putting up signs at the land, stating that it belonged to the army.

The farmers were called again several times to the Namzarng GAD office to sign that the land belonged to the military: on September 23, October 27, and December 17, 2019. Each time they refused to sign, and carried on cultivating their lands.

The farmers did not stop cultivating their lands. On December 28, 2019, and again on March 10, 2020, the military posted further signs on the lands, saying it belonged to the army. They also sent about five soldiers to the farmlands, to warn the farmers not to work there.

The farmers, however, continued to cultivate their lands.

Finally, on June 9, 2020, the 47 farmers were summoned to Namzarng Court, and were informed that they were being charged by IB 66 for trespassing on military-owned land under Article 447 of the Penal Code. Some local community leaders provided guarantees for the farmers, so they were not detained. However, since then, the farmers have been forced to go and report themselves frequently at the court: on June 18, June 24, June 29, and July 10. Each time, the farmers have to waste a whole day travelling by truck to and from the court in Namzarng, which is about one hour’s drive from Kho Lam.

The farmers are seeking ways to fight the case, and to keep their lands. 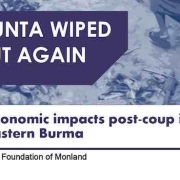 THE JUNTA WIPED US OUT AGAIN

The Network for Human Rights Documentation-Burma Calls for Accountability in...