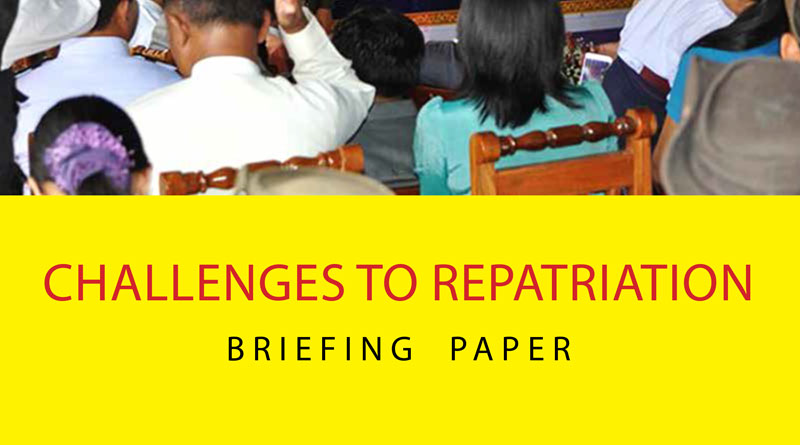 The Burma Army has targeted and attacked ethnic groups for nearly 20 years, thus leading them to flee their country and seek refuge in foreign countries. Among these people, are the Karen, who fled Burma and found refuge in Thailand.

Some Karen People are given the opportunity to be resettled in a third country, for example England, Australia or the United States, while some other hope to return to Burma.

In 2012, after the KNU negotiated a ceasefire with the Burmese government, there have been rumors about the possible repatriation of refugees from Thailand back to Burma.

In August 2012, Saw George, Secretary of the Karen Refugee Committee, declared that: “I think refugees will be sent back to Myanmar. We are called Karen refugee people and we are temporarily settled in seven refugee camps, looked after by the Thai government and UNHCR, so both of these groups have to know what we think about repatriation. In my opinion, there is not really peace in Myanmar yet and the repatriation program is too early. At the moment, we can’t return because there is no real peace”.

Figures released by The Border Consortium (TBC), a humanitarian organization supplying food and shelter to refugees in the camps, estimates that there are 130,000 refugees in total – 82,000 who are officially registered. There are nine camps along the border – Nu Po, Umphiem, Mae La, Mae Ra Ma Luang, Mae La On, Tham Hin, Ban Don Yang, Ban Mai Nai Soi and Ban Mae Surin which is also known as Karenni camp 1 and 2.

Four years after the first rumors, repatriation has started. Indeed, on October 25, 2016, following an agreement between the Chief Minister of Karen State, the Thai government and UNHCR, 19 families (96 people) started to be repatriated, being temporarily placed in a camp in Myawaddy, Karen State, along the Thai-Burma border.

KRC has established 10 priorities the Burma government should comply with in dealing with repatriation of refugees:

In 2014, the Mae Fah Luang Foundation (MFLF) has begun conducting surveys at Mae Ra Moe and Mae La Oon refugee camps in Mae Hong Song province to understand how refugees feel about repatriation, resettlement and continued residency in Thailand. According to the surveys results, only 2% of respondents preferred returning to Burma, while 60% favored third-country resettlement, and 38% wished to remain in Thailand.

A further survey conducted by the Karen Refugee Committee at the Tham Hin camp in Southern Thailand, found that 46% of respondents favored third-country resettlement, 27% preferred remaining in Thailand, while another 27% preferred returning to Burma but only if peace is guaranteed.

A demonstrable example of this can be seen in the 17 refugees repatriated from Thailand to Yangon at the end of October 2016 and who are stuck in a state-run shelter in Yangon because the government has so far failed to arrange housing for them. The refugees have declared they already regret their return and that they are really disappointed by the behavior of the government. Ko Phyo Min Khin, a former political prisoner helping refugees, said: “It looks like the government is deliberately delaying resettling the refugees so that their relatives come and take them instead”.