Blog
You are here: Home / Blog / News / At least 61 civilians killed this month in clashes in Myanmar’s remote b... 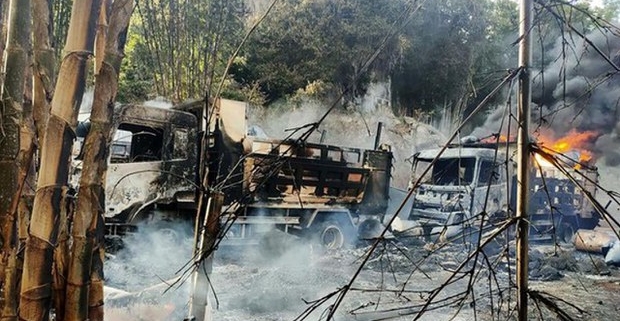 More than 40,000 people were displaced from the fighting in Kayah and Kayin states, and Sagaing and Magway regions.

More than five dozen civilians have been killed and tens of thousands displaced due to clashes between Myanmar’s military and anti-junta forces in four of the country’s remote border regions in December alone, according to local militias and an official with the shadow National Unity Government (NUG).

At least 61 people died and more than 40,000 fled fighting this month – the 10th since the military seized power from the democratically elected National League for Democracy (NLD) government in a Feb. 1 coup – in Kayah and Kayin states, as well as in Sagaing and Magway regions, sources told RFA’s Myanmar Service.

The deaths occurred as the result of four specific incidents, including the Dec. 7 massacre of 10 people in Sagaing’s Don Taw village, a Dec. 17 helicopter attack on Hnankhar and Mwayle villages in Magway’s Gangaw township, a Dec. 20 airstrike on Ye Myat village in Sagaing’s Yay-Oo township that killed seven, and a Dec. 24 fire in Kayah state’s Phruso township in which 35 people perished.

A spokesman for the Karenni National Defense Force (KNDF), an armed ethnic group fighting against the military in Kayah state, said the military was responsible for the killing of civilians in December and said that such reckless actions suggest that the junta is “on the verge of collapse.”

“They are acting in the most violent way to frighten the people,” he said.

“But no matter what they do, how brutal they are, they will not see us surrendering in fear or receiving every blow with our heads bowed.”

The junta says voter fraud led to the NLD’s landslide victory in the country’s November 2020 election but has yet to provide evidence for its claims and has violently suppressed nationwide protests calling for a return to civilian rule, killing 1,382 people and arresting 8,331 in the nearly 11 months since, according to the Bangkok-based Assistance Association for Political Prisoners.

The military has also launched several offensives in the country’s remote border regions, battling ethnic armies and local branches of the prodemocracy People’s Defense Force militia that have formed to help protect residents. Many civilians have lost their lives in the crossfire, while reports of looting, torture, rape, and summary executions by junta troops are common.

Junta spokesman Maj. Gen. Zaw Min Tun has acknowledged armed clashes between government troops and PDF militia fighters that he labels “terrorists,” but denies that any massacres of civilians have taken place.

In the meantime, the United Nations Security Council, U.S., Britain, Canada and other members of the international community have issued a series of statements condemning mass killings by the military and raising concerns about the high number of people who have been displaced by the violence.

A spokesman for the ethnic Karenni National Defense Force (KNDF) recently told RFA that around 20,000 civilians from 10 villages had been forced to flee to refugee camps or into the mountains in the wake of what has been referred to as a massacre that took place in Kayah state’s Hpruso township on Dec. 24.

Meanwhile, fighting in and around Kayin state’s Lay Kay Kaw area since Dec. 15 has forced some 16,500 civilians to flee to makeshift camps along the banks of the Thaung Yin (Moei) River and into neighboring Thailand. Local media also reported in recent weeks that at least 4,000 civilians had fled their homes in Magway and Sagaing regions due to airstrikes by the military.

Sources estimate that in December alone, more than 40,000 people were displaced in Kayah and Kayin states as well as in Sagaing and Magway regions. Those displaced by the recent fighting join more than 500,000 refugees from decades of conflict between the military and ethnic armed groups who were already counted as displaced at the end of 2020, according to the Internal Displacement Monitoring Center, a Norwegian NGO.

Aung Myo Min, the NUG’s human rights minister, welcomed the global condemnation of the junta’s killing of civilians – including women and children – but called the response by the international community “weak.”

“Orders were deliberately given to kill a large number of people and the dead were innocent civilians and women and children,” he said.

“Such actions should be viewed as international crimes and therefore require greater international action and justice. But what we are seeing now is that [junta troops] are getting bolder and bolder as the international reaction is rather weak.”

He called on governments around the world to take “immediate and effective action” against the junta to prevent the further death of innocent people in Myanmar.

Political analyst Sai Kyi Zin Soe told RFA that despite condemnation, he expects the military will continue to label those who oppose it as terrorists and kill them.

“They have … branded mass uprisings as acts of terrorism and cracked down brutally, using extreme force,” he said.

“I see the military [continuing to portray] those who are being killed as terrorists. And that means the military will continue to follow this path.”