(CNN)Armored vehicles on the streets of major Myanmar cities, an internet blackout and nighttime raids on prominent critics on Sunday, did not stop protesters taking to the streets for a tenth consecutive day on Monday to oppose the recent military coup.

In some instances, authorities appeared to respond with force. A protester from the city of Mandalay told CNN he saw uniformed security forces firing rubber bullets and using slingshots in the direction of a crowd of peaceful protesters, causing them to flee.
He also said some of the people firing at protesters were not in uniform. CNN is attempting to reach out to military in Myanmar for response.
“More than anything I was angry that they are shooting at people who are not armed. I am more angry than scared,” said the protester, whom CNN agreed not to name due to his fear of reprisal.
The military had escalated its crackdown on dissent over the weekend, with security forces in the country’s northern Kachin state also firing on protesters at a power plant Sunday. A crowd had gathered there believing the military would cut off the electricity, according to social media video and local reports.
In the confrontation, broadcast live on Facebook, soldiers and police in the state capital Myitkyina fired shots to disperse protesters, though it is unclear whether live rounds were used. Video shows security forces using water cannon and then protesters fleeing as several rounds of fire can be heard. Five journalists were reportedly arrested while covering the incident.
A witness at the scene said that the situation was “stable” until around 11 p.m. local time when the security forces used water cannon against protesters, who had built a barricade of tires and oil drums. Protesters started throwing stones, to which the security forces responded by firing rubber bullets, he said.
“It was very loud and people got really scared. It was quite horrifying to see because people were running with fear and screaming at the same time,” said the eyewitness, who didn’t want to be named for fear of retaliation.
The weekend’s events marked an escalation in the military’s continued crackdown on demonstrators and opposition leaders, since it seized power in a coup on February 1, ousting democratically elected leader Aung San Suu Kyi, detaining key government officials and forming a new ruling junta. 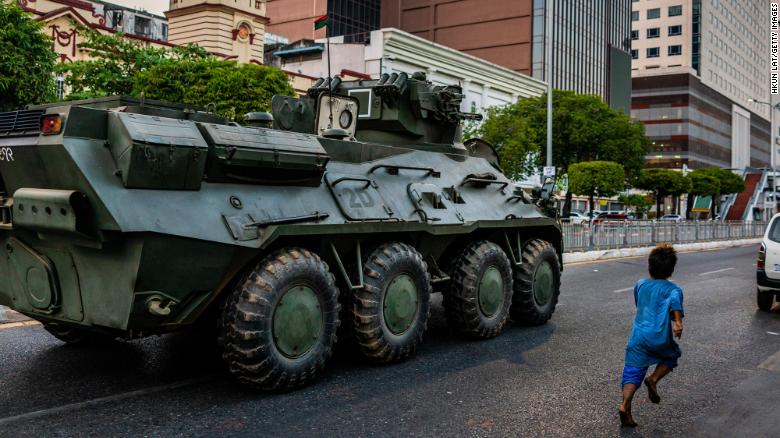 A child runs alongside a military armored vehicle moving along a street on February 14, 2021 in Yangon, Myanmar.
Suu Kyi’s detention, due to expire Monday, will be extended until a court hearing Wednesday, her lawyer said. Khin Maung Zaw said he has still not been able to see Suu Kyi but has discussed the issue of representing her with the judge.
Western diplomats on Sunday warned Myanmar’s junta that “the world is watching” and advised the military not to use violence against protesters.
“We call on security forces to refrain from violence against demonstrators and civilians, who are protesting the overthrow of their legitimate government,” read a joint statement signed by the US, Canada, and the European Union that was published on the official Facebook pages of their embassies.
Since the takeover, hundreds of thousands of people have joined protests and civil disobedience campaigns. People could be seen on the streets in Yangon, Dawei and Myitkyina holding “Civil Disobedience Movement” signs and “Free our leader” banners, showing pictures of detained leader Suu Kyi. People also marched holding signs saying: “Stop arresting people illegally at midnight.”
The protests have swelled to include people from all sections of society, including a strike by government workers as part of a mass civil disobedience movement.
While there have not yet been many reports of injuries, police have been recorded using water cannon against protesters on previous days and have also faced allegations that they have deployed live rounds.
A young woman named Mya Thweh Thweh Khine remains in critical condition at a hospital in the capital Naypyidaw with a gunshot wound in the head, a source with direct information about the victim told CNN Friday. Video of the incident circulated online showing a young woman suddenly falling to the ground while taking cover from a water cannon at a protest. Her image has been held up at protests as a symbol for those resisting the coup.
In response to the protests, the military has sought to limit access to the internet and news services, as well as floating a potential new cyber security law that observers fear could further limit the flow of information.
Internet and mobile services were disrupted overnight Sunday into Monday, and Monitoring NGO NetBlocks said network connectivity across the country had dropped to only 14% nationwide since 1 a.m. local time. Mobile services from all carriers were also disrupted, according to residents. By 9.30 a.m. local time Monday, some areas reported internet has since been restored. 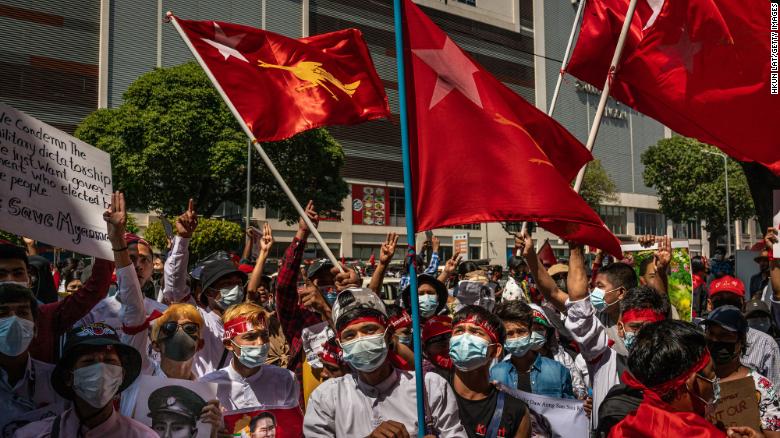 Protesters hold placards and shout slogans near the City Hall on February 13, 2021 in Yangon, Myanmar.

Fear when the sun goes down

Residents have reported a palpable fear for their safety after dark, with many scared they will be dragged out of their houses by police in nighttime raids, or are terrified of reports of arson and crime following the release of thousands of prisoners in an amnesty on Friday.
Reuters reported that residents in some neighborhoods have banded together to form patrols and provide some security for their streets at night.
“All the streets near me are also making groups to defend themselves from these troublemakers,” Myo Thein, a resident of the South Okkalapa township, told Reuters.
Hundreds of people have been arrested since the coup, and most held without charge, according to the United Nations human rights office. The Assistance Association for Political Prisoners Burma (AAPPB) said at least 400 people have been detained in relation to the coup and other reports suggested some activists and journalists had gone into hiding following news of their potential arrest.
One journalist in Yangon, who wanted to remain anonymous for fear of arrest, said rights defenders and reporters are struggling to let the people know what is actually going on.
“Journalists are in remote working and in hiding as they are scared of night arrests and their homes going to be raided. They can be arrested anytime for what they are reporting although (it’s the) truth,” the reporter said.
On Saturday, the military announced the arrest warrants for seven high-profile activists for using “their popularity on social media … to undermine the peace and order of the country,” according to the military’s information page on Facebook.
Among those named is leading democracy activist Min Ko Naing, an organizer for the “Civil Disobedience Movement” Facebook page, which has more than 200,000 followers. Min Ko Naing spent more than 20 years in prison following the 1988 student uprising in Yangon that was brutally suppressed by the military.
In a Facebook post Sunday, Min Ko Naing called on people to continue their civil disobedience campaigns, saying the military was inciting anger to stir unrest.
“Last night, we had to face the horrifying events across the country. They are doing it with all they are capable of. They provoke our anger, and use people including police,” he said. “This week is the most important week, this week will decide for us.”
Over the weekend, the military suspended three laws that were aimed at constraining security forces from detaining suspects or searching private property without a court approval. 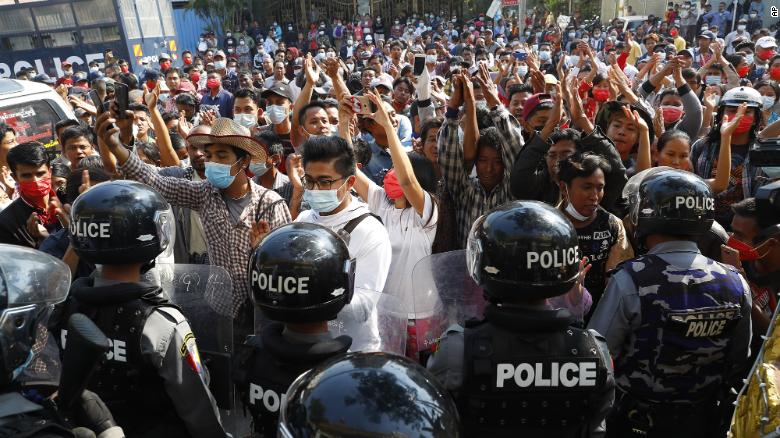 Residents and protesters face riot police as they question them about recent arrests made in Mandalay, Myanmar, February 13, 2021.
Reuters reported that among the three suspended sections is the law that mandates a court order to detain any prisoner beyond 24 hours and limits security forces’ ability to enter private property to search it or make arrests.
The suspensions also free up spying on communications, according to the Reuters report.
In addition, junta chief Min Aung Hlaing on Sunday announced several penal code amendments that appear to target protesters, journalists and critics of the coup.
The changes impose a maximum 20-year prison term for anyone who attempts to or incites hatred of the government or military “by words, either spoken or written, or by signs, or by visible representation, or otherwise.” Anyone who is found to “sabotage or hinder the performance” of military personnel or law enforcement agencies can also face up to 20 years in jail. Those who hinder or disrupt the military and government employees can be imprisoned for up to seven years under the updated laws.
The AAPPB said the suspensions were ways to instill “fear of police raids into the general public during the night” as it means that the Myanmar authorities can search houses “without the presence of the ward administrative officers and unlawful acts during inspection can be committed.”
The human rights organization said these amendments display how the military “violates inalienable human rights and intensifies the suppressive apparatus towards the general public.”
UN Special Rapporteur on Human Rights in Myanmar Tom Andrews warned in a tweet that the military would be held accountable for its actions.
“It’s as if the generals have declared war on the people of Myanmar: late night raids; mounting arrests; more rights stripped away; another Internet shutdown; military convoys entering communities. These are signs of desperation. Attention generals: You WILL be held accountable,” Andrews said.