A man died in Yangon’s Insein Prison on Sunday after he was detained for allegedly tampering with three passenger planes owned by Air KBZ, where he worked as an avionic engineer.

Min Min Soe, 34, was arrested on September 11 and accused of being part of a group of people who put leaves into the planes’ pitot tubes, an act of sabotage that could have caused the planes to crash. The tubes are used to measure an aircraft’s speed at altitude.

The man’s family learned of his death on Monday when they travelled to the prison after hearing a rumour that he would be released as part of the junta’s amnesty.

Authorities told his father, Soe Paing, that he died while being treated at the prison hospital’s intensive care unit after fainting suddenly, and that he had high blood pressure at the time of death. Min Min Soe did not have any known health conditions.

“We were told that he died from heart and kidney conditions,” said Soe Paing, citing a statement given to him by the prison doctor and a prison officer.

The prison authorities also told him that Min Min Soe was treated on October 9 for “having spots on his lungs” but did not give any other details, Soe Paing added.

The family retrieved the body on Monday and cremated him at the Yay Way cemetery the following day. Soe Paing said there were no signs of abuse or torture on his body.

“He didn’t do anything wrong,” Soe Paing said. “They broke him psychologically.”

On the day of his arrest, Min Min Soe was invited to a meeting at an Air KBZ office and arrived to find soldiers waiting for him.

“He was lured there… we haven’t seen our son since he was taken to the interrogation center,” said Soe Paing.

“The company does not even answer our calls sometimes. Everyone there keeps passing responsibility to each other,” he said.

On August 12 one of Air KBZ’s ATR 72-600 planes was grounded before its scheduled departure to Heho from Yangon after the leaves in the pitot tube were found during a pre-flight inspection, junta-controlled media reported.

A second ATR 72-600 was used for the flight instead, but had to turn back to Yangon after the autopilot system failed. Once it had landed it was found to also have leaves in its pitot tubes. The airline allocated a third plane for the journey but once again found leaves in the pitot tubes.

The September 24 report in junta-controlled media said that the leaves were put there by Thein Lin Htaik, a line maintenance manager for the airline, with the help of four other staff members under the directions of a janitor. The story did not mention Min Min Soe.

Up to 21 Air KBZ staff members, including Min Min Soe, were later detained at Insein Prison in connection to the case, Soe Paing said. Min Min Soe worked at the company for 11 years, he added.

“Their senseless accusations cost him his life,” Soe Paing said.

Air KBZ could not be reached for comment on the case. 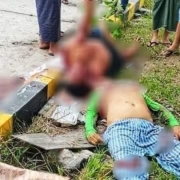 Weekly Update on the Situation of Human Rights in Myanmar: Post-Coup (11-17...

Myanmar Must Turn Sorrow into Strength: Wife of Detained Activist
Scroll to top