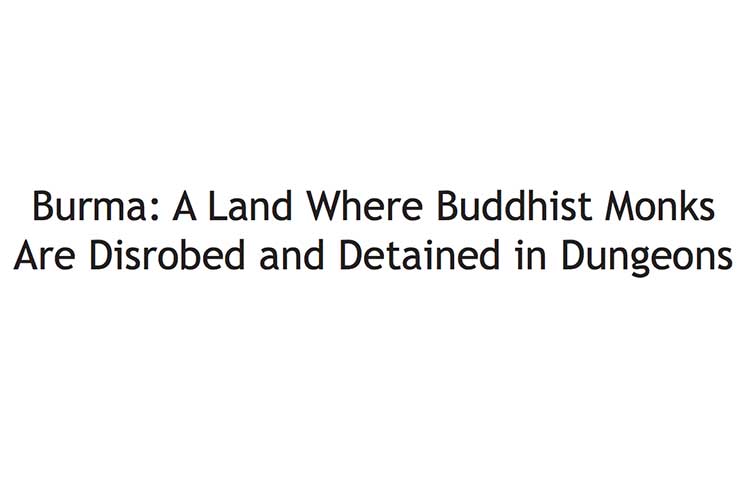 In Burma, anyone can be detained for being involved in human rights advocacy, democratic activities or peaceful demonstrations. Thus, political activists are not the only stratum of society vulnerable to arrest by the military intelligence, Buddhist monks are also subject to the same fate. It is estimated that there are approximately 300 monks and novices in Burma’s prisons, whereas the number of political prisoners lingers at about 1400 to date.

Since the pro-democracy uprising occurred in 1988, the military regime has constantly attempted to crackdown on all strata of society including Buddhist monks who are assumed to be potentially significant revolutionary forces. During the demonstrations that occurred in August and September 1988, the regime killed masses of peaceful demonstrators including monks, students and civilians.

Although Buddhist monks have been involved in the movement by non-violent means, they have not been excluded from arrest and imprisonment. Since there is no rule of law but only ‘law and order’ in Burma, all arrests come without a warrant and the victims face brutal interrogations at military detention centers. Almost all the lawsuits concerning such arrests have been tried secretly without granting the accused any rights to seek legal counsel. Trials have been perfunctory; the so-called judges just read out the charges. While the accused is asked to plead guilty or not, the court announces its verdict which has invariably been one of guilt.

Most of the monks, including novices, that were arrested were charged under Section 5 (J) of the Emergency Provisions Act which is a widely worded law that has been used to suppress dissent even in the absence of a proclaimed ‘State of Emergency’. Some monks were charged under Article 295 of the Penal Code which describe the charge as ‘of offenses relating to religion’.

Download: A land where Buddhist monks are disrobed and detained in dungeons (725kb)

Driven Away: Trafficking of Kachin Women on the China-Burma Border
Scroll to top