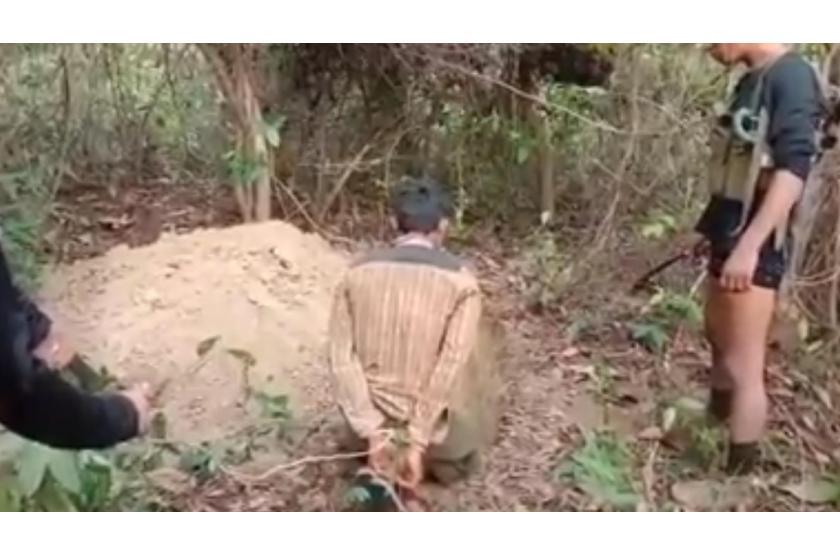 The Arakan Army will investigate the source of a viral Facebook video showing the brutal murder of a civilian, a spokesperson for the group said Wednesday.

The Tatmadaw, meanwhile, accused the AA of committing, filming and sharing the murder to terrorize and control local populations.

Facebook users Sit Tan Aung and Sit Nyein Aung are believed to have been the first to post the video.

Myanmar Now cannot confirm the time, place, location or identities of those involved at this time.

The one-minute video begins with a man, wrists clasped behind him, being ruthlessly beaten with a stick at the edge of a grave by three men.

This is awful. It’s inhumane. No race or organisation should ever do this…

Before the first blow strikes the men prod the victim for his last words. “I want my soul to return to my mum and brother. May the Arakan Army find peace,” the man says.

He then falls limp into the grave, as one of the three continues to beat his body and head, striking more than 16 times before the video ends.

“It must be asked why Facebook did not censor this video,” AA spokesperson Khine Thuka said. He added that he found it suspicious that the video surfaced at the same time David Stilwell, the US assistant secretary for East Asia and the Pacific, was visiting Myanmar.

On September 10 photos of two men decapitated and on display in a street in Myaebon Township, Rakhine State, appeared on Facebook. The same day a man was decapitated in Ann Township.

“This is awful. It’s inhumane,” Myo San Aung, a resident of Rakhine State, told Myanmar Now. “No race or organisation should ever do this.”

In Myanmar, Courts Increasingly Used to Silence Criticism of Military and G...
Scroll to top